A look into the newly released DVD collection.

February 13, 2017
comment
As we discussed a few weeks ago, the 50th anniversary of Star Trek provided an excuse to give every one of the existing television series a complete overhaul onto Blu-ray and DVD. On Feb. 7, CBS and Paramount finally released the complete series of Deep Space Nine for our viewing enjoyment.

Depending on the kind of fan you are, this is either the best or worst series in the collection. I personally fall more on the best side on the coin, but let's briefly examine the show. Launched in 1993, while Next Generation was in its sixth season, the show started out as a stationary location rather than a starship, meaning everything came to them rather than them traveling around. The Federation made up maybe a third of the storyline content, as there was more focus on the Bajorans and Cardassians, as well as the Dominion War. Most of the cast were alien, which drove out the human element often seen on Trek. There were stories revolving around war, rebellion, class-systems, religion, spying, government occupation and slavery that played out throughout the show's run. By every definition, DS9 was the opposite of what a standard Star Trek show was up until that point.

But in that sense, it also separated the show from all its predecessors and successors. As much crap as people love to give Voyager and Enterprise, both of those shows returned Star Trek back to its foundation, while everything that defined this show set it apart. And because of this, it gave the writers more room for dramatic themes and conflict that many of the other fan-favorite episodes didn't have. There's an inherent dark side to DS9 that makes it appealing to Star Trek fans who wanted something more that just roaming around space looking for the next problem to solve with few consequences. As is the case with every series, not every episode is a winner, but there's a lot to take in no matter which character you decide to follow. You may find yourself sympathizing with and relating to a lot of people who have nothing to do with The Federation.

The Complete Series is exactly what it says: You get all seven season of the show completely uncut and restored to their original form after years of syndication butchering. Each season contains special features on individual cast members and their characters, photo galleries, mini-documentaries and examinations of storylines, sketchbooks and the occasional episode dissection, not to mention Easter eggs hidden throughout some of the DVDs as you browse through the menu options.

Unfortunately, the stuff that's missing stands out. For example, there's no retrospective look on the series from the cast, as done in other sets. There are also no blooper reels, which we know exist from clips on YouTube where they were aired on other TV specials. There's no episode commentary presented on anything, like no one bothered to sit down and say, "Let's talk about some pivotal episodes, okay?" In fact, the entire DVD set appears to have been lifted from all the previous sets that had already been produced and thrown together as a package deal, which from a DVD collector's standpoint is lazy as hell. 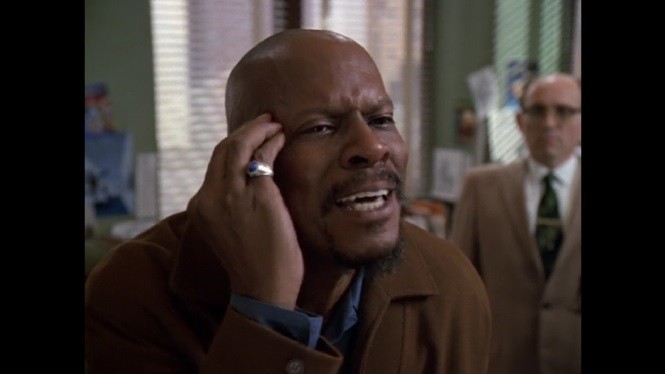 The other disappointing factor is that unlike other Star Trek shows, these episodes have not been cleaned up for viewing. There are not presented in HD and have not been remastered in any shape or form. The reason behind this is that DS9 was the first series to stop using models and switched everything over to CGI graphics for ships, special effects, space battles and more. Because the graphics are outdated, everything would need to be recreated as they did with the HD versions of the original series, but because of the amount of graphics, it would cost too much time and money. Because of this, it's painfully obvious the footage is just a hair off and can occasionally have a blur to it when watching on a new monitor. It does not make for the greatest experience.

If you're a Trek fan, this is a must own for the collection, for the obvious reason that someday the episodes will no longer be available on Netflix, and it would be nice to have everything in one place. Sadly, you have to accept the notion that you'll never see these episodes remastered unless Paramount decides to throw a ton of money behind it. You get the complete collection, but it will never be the kind of collection you may want.