Group gears up for last-minute push at Utah Capitol. 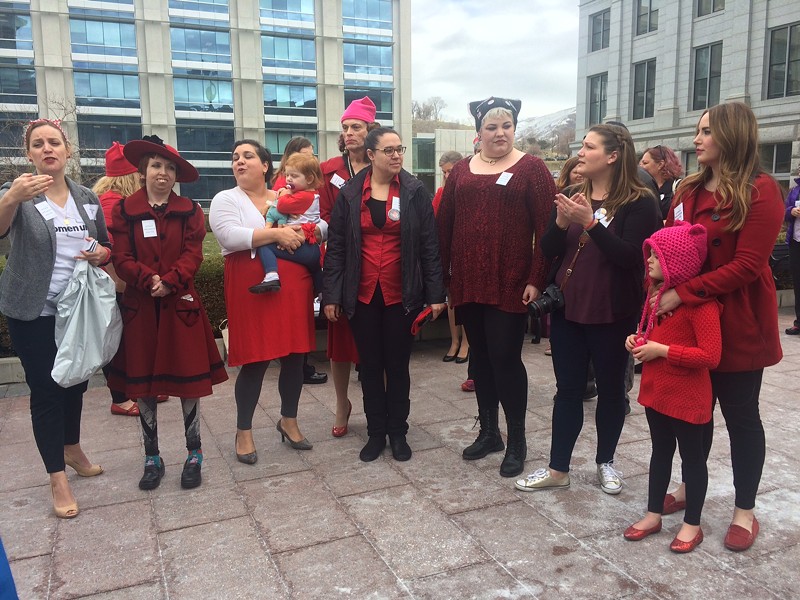 On the first day of the 2017 Utah Legislature, thousands of women marched through to the state Capitol, as part of a national push to show they would be watching lawmakers closely this year.


“We are here to say our voices haven’t been heard,” Chelsea Shields, executive director of Utah Women Unite, said at a news conference kicking off a day of letter-writing and anticipated visits of group members with Utah representatives.


But similar meetings largely have been unsuccessful this session, Shields said. Half of lawmakers agreed to meet with group representatives, but many dismissed the group’s requests for Utah to pass a nonbinding resolution that would endorse a federal constitutional amendment guaranteeing women fair treatment.


Shields declined to say which legislators brushed off her group. City Weekly could not independently verify the claim.


That resolution backing an Equal Rights Amendment has stalled. Another bill to ensure equal wages for Utah women also has failed to make it to the Senate for a vote.


Group members said they believed there have been several “small victories” at the Capitol this year. A successful measure would mandate the testing of all rape kits for DNA evidence. Lawmakers removed abortion restrictions from a bill regulating video-conferencing between doctors and patients, a service often used by rural Utahns. A measure requiring doctors to notify women that they can stop their drug-induced abortion before a second pill is taken was somewhat neutralized when it was tweaked to include medical language.


Shields’ group isn’t waiting until 2018 to push for further reform. Group members currently are building an app with a directory of women-owned businesses and planning other rallies, and marches.


Rebekka Hamatake, a mother of four from North Salt Lake, is working on the app project. Hamatake and her husband Chris brought their youngest children, Zion, 7, and Atlas, 6 months, to the Capitol Wednesday to tag along for a meeting with one of their legislators, Sen. Todd Weiler, R-Woods Cross.


“We want him to push the Equal Rights Amendment through and stop putting it off,” Hamatake said.


Aside from the legislative meeting, Hamatake was taking the day off from her usual stay-at-home mom duties, handing them off to her husband in order to observe “A Day Without a Woman.”


Several at the gathering outside the Capitol said they were joining other female workers across the country in staying home from work to underscore just how much they contribute every other business day.


“We are waking up as activists in the community,” Johnson, Utah Women Unite caucus director, said.


Her group, formed in the wake of the election of Donald Trump, isn’t just made of liberal, non-religious women and their supporters, organizers said. It’s also conservative women and members of the Mormon church. And many are considering running for state office, Johnson said.