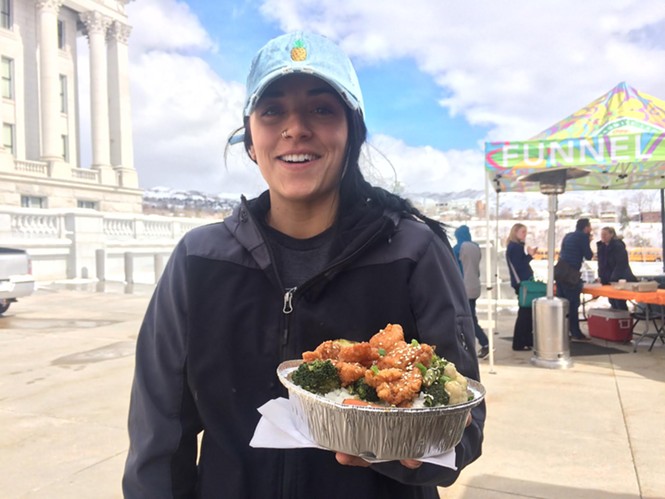 Eating at food trucks is cheap and easy. Running them is a whole other story; especially in Utah.


Several of the traveling vendors say a patchwork of requirements across the state forces them to spend too much money and time on permits and inspections for each place they park.


And their concerns are being heard in the state Capitol: The Legislature now is considering streamlining food-truck regulations—a change that proponents say will be a big help to new owners of the mobile kitchens.


On Friday, half a dozen food trucks parked outside the Utah Capitol in a show of support for the bill, generators humming as they cooked up everything from Korean-inspired noodle bowls to funnel cake.


“We want everyone to be treated fairly,” Henderson said. “I think we’ve hit the mark.”


Henderson’s measure stipulates that if the trucks first pass state fire and health inspections, their license to operate in one city applies to all others in Utah. Previously, truck owners had to redo inspections in each new city or county, some filling out new paperwork for almost every new parking lot they cruised into.


And the bill will hold costs low, limiting the price of licenses to no more than reimbursement for city costs related to the regulation.


Another notable part of the bill: The proposal effectively would block cities and towns from banning food trucks outright. If one city grants a permit, all other cities must recognize it, though individual mayors and town councils still can put limits on when and where the trucks can go.


“It’s going to be huge,” said Taylor Harris, general manager of the Food Truck League. The businesses he works with “want to focus on the food and the community. And they want to follow the rules. It’s just so hard."


Henderson says the Utah Restaurant Association has told her she has its support. But she also has heard from some individual restaurant owners who are nervous about losing business under the bill. They take issue with a provision maintaining that cities can no longer force the trucks to stay a certain radius from a brick-and-mortar restaurant.


Henderson said individual cities could address the problem by forbidding the trucks to park directly outside or next door. She’s working on draft regulations cities could put in place, and she notes she has the backing of the Utah Association of Counties and the Utah League of Cities and Towns.


Harris, who runs the Food Truck League, said he believes trucks just starting out will benefit most from the legislation, if it passes.


“The ones that just started in the last six months are going to be very, very grateful,” Harris said.


Newcomers often don’t have the time and money to dedicate to making sure they’re complying with rules at every location, Harris said. The bill could help them avoid mountains of paperwork and fines from license violations.


Filipe agreed. After moving back from Washington State, she recently started the spinoff truck from her grandparents’ South Jordan restaurant, Lanikai Grill.


Filipe said running the business includes much more paperwork than she expected. “Now that we’re trying to grow and expand, this is really gonna help us out,” she said.


The bill awaits approval from the Senate, House and governor.