Though not on trial, former AG’s name is forever tied to that of John Swallow’s.

Dismissed charges didn’t make former attorney general Mark Shurtleff feel any less on trial the last few weeks. His name has been dragged through the state’s case against his once campaign fundraiser and then AG successor John Swallow, who faces a bevy of corruption-related charges, including an allegation of an extortion conspiracy among Swallow, Shurtleff and Timothy Lawson. 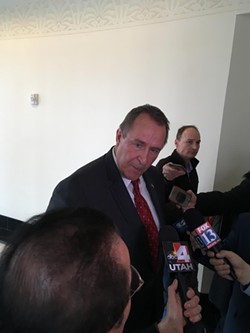 On Friday, however, Shurtleff was released as a potential witness for the defense as the trial winds down.


No longer gagged, Shurtleff let loose on the state’s star witness Marc Sessions Jenson—described by Shurtleff as “the conman, the fraudster,” as well as “a really good liar” who is “slick on the stand.” Jenson’s statements, he added, were also the impetus for the investigation into Swallow and Shurtleff.


“He was never extorted,” Shurtleff said outside the courtroom Friday afternoon. “No one ever told him he didn’t have to pay his restitution or pay it to somebody else.”


But Jenson wasn’t the only one who Shurtleff says warrants disparagement. He claims that lead investigators FBI Special Agent Jon Isakson and Department of Public Safety investigator Scott Nesbitt committed perjury. When asked whether they should be charged, Shurtleff answered yes.


To remedy his besmirched reputation, Shurtleff is tossing around the idea of telling his side in a book, and possibly filing a civil suit over what he sees as an abuse of power.