Last Day of the Leg

Around 5:30 Thursday evening, emphatically, an elected representative on the House floor cracked a bingo joke.


“Blackout!” she yelled after the speaker pro tem read out a list of bill numbers.


That’s the kind of day it was.


Levity among the legislators belied the urgency that typically hangs like a cloud over the last day of the session. Outside, citizens were driving around with their windows down. It was like the warm, serene weather had convinced the politicians on the hill that things were going to turn out fine. 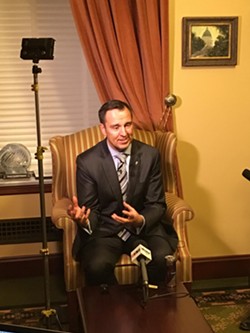 Even House Speaker Greg Hughes, with one eye on the deadline, couldn’t help but succumb to the kumbaya feeling that had permeated the Capitol’s hallowed chambers. At a seated press conference, the speaker with a semi-smile acknowledged the unusually placid Day 45.


“I can’t put my finger on it,” he said, then offered: “We’ve communicated well. There hasn’t been any gamesmanship. We’ve been pretty drama free.”


Earlier in the day, rumors swirled that the session was on pace to end hours before midnight.


As is custom, lawmakers on the last few days routinely, for expediency, suspended the rules that require three readings of a bill. During an hour block beginning at 3 p.m., the Senate passed or amended nine bills that ranged from a law limiting certain opioid prescriptions to a measure that would require all new government buildings have baby-changing stations in male and female bathrooms.


Bills were circled and shuffled around, but they were moving too.


Opposition to substantive measures was addressed in tones more level-headed than explosive. A bill to lower the legal blood-alcohol limit in drivers from .08 to .05, for example, was criticized by a few as a tourist deterrent, but mildly.


Hughes was among those policymakers who had qualms with that was voted to the governor’s desk on Thursday.


“I’m a little worried about .05, to be honest with you, but the intent is important and I understand why it passed,” he said.


But around 7:30 when the Senate reconvened after a break, more than 35 bills were listed on the board, dashing any possibility of an early sine die.


Lobbyists and advocates filled the seats in the Senate gallery for the final show. By 10 p.m., each mispronounced word was chalked up to the symptom of working at a late hour.


The final piece of legislation on the docket was House Bill 99, Rep. Mike Noel’s law to modify bigamy in the criminal code. The bill changes the legal definition of bigamy to encompass marriage and cohabitation. It also makes the act of bigamy—typically a third-degree felony—a second-degree felony when aggravating circumstances, such as fraud or sexual abuse, are involved.


As 10:4511 p.m. rolled around, the Senate agreed to “saunter”—the preferred term for hang out for a bit—and it looked like the polygamy bill would die on the vine.


HB99 was moved to the top of the list a half-hour before midnight. It was the last contentious bill, and the debate ate up most of the remaining minutes before adjournment.


Sen. Deidre Henderson, R-Spanish Fork, agreed with Davis. “The intent is to protect people, but I fear in reality something like this really harms the people that we’re purporting to help,” she said.


It was the last substantive piece of legislation to be passed in the Senate. On the other side, Hughes noted that 535 bills were voted through the Legislature, a record for the State of Utah.


With the marathon over, Senate President Wayne Niederhauser said off the cuff what everyone must have been thinking. “So much for getting out early tonight.”