Getting a feel for one of the latest bars to join the downtown SLC area.

Bars and clubs always seem to be coming and going. Some of the longest-running names have closed up shop, while others have slowly been transforming themselves into new types of hangouts in order to attract new people. But some of these new places look pretty cool. Today, we look at Purgatory Bar, located behind Sapa at 62 E. 700 South in SLC. The bar has quickly been gaining a reputation as a chill hangout with some non-traditional pub food. Today we chat with the owners of the bar to talk about its origins and the menu, among other topics. (All pictures provided courtesy of Purgatory Bar.)

Gavin: Hey everyone! First off, tell us a little bit about yourselves.

Hiro: My name is Hiro and I was born near Tokyo in a smaller city called Takasaki. My family and I moved here when I was seven (I’m 35 now) and have been here since.

Diamond: I was born and raised in Oakland, Calif. I spent a large chunk of time in Portland and Seattle in the last 15 years. My family has been in the [bar] industry for a long time. I remember being 18 and sitting at the bar in the restaurant my brother and sister-in-law opened in Portland watching the bartenders. My first “cocktail” experience was a virgin mojito. Ever since then, I’ve been hooked on all things liquid related. 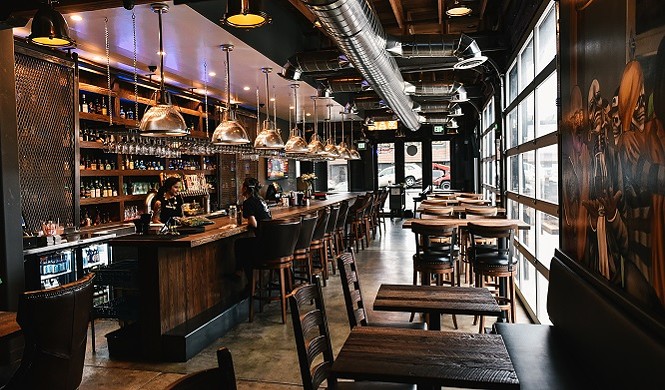 What had each of you been doing career-wise prior to the bar?

Hiro: Prior to Purgatory, I was a head chef at Happy Sumo for about a decade. But during the early part of 2016, I quit the Sumo and moved to Tokyo. I was primarily there to learn and work in the ramen industry. I worked at two different ramen shops and also attended ramen school. After my Japan experience, I moved back to Utah to open up a ramen shop with the owners of Purgatory/Sapa, but the building of the restaurant was still in . So while I was waiting, I worked for a few different spots in and around town, one of which was HSL. I loved working there, but my investors needed a chef at Purgatory, so here we are.  We are still in progress to open the ramen shop by the end of this year, by the way!

Diamond: In a former life time, I did crisis work with children and families in Seattle. I was a bona fide therapist. I’ve spent the bulk of my career doing non-profit, social work type of things but my experience has been all over the place ranging from teacher, program manager, graphic designer and bartender. Some of my social work interest has led me places all over the world. Those experiences have definitely shaped my palate. A couple of years ago I was in Morocco, volunteering with an NGO, and discovered Maghrebi mint tea. I’m playing with an iced tea version of this that should be making an appearance for patio season.  Most recently beverage-related, I managed the NextBar at Sapa.

How did you both come to meet each other and become friends?

Hiro: Well, my friend Clayton Carr (RIP) introduced me to the Sapa Group about two years ago, and I been hanging with and around their whole family ever since.

When did the idea come about to start a new bar in downtown SLC? What did you find most appealing about the location? And what made you choose Purgatory for the name?

Hiro: The Sapa Group had originally purchased the property when they built Sapa. It’s just been vacant for a long time.

Diamond: A couple of years ago, Mountain West Hard Cider was planning on putting in a cider distillery in our current space. Unfortunately, when they tried to proceed with their project, they found that the location was zoned for beer, but not cider. When the project fell through, my family decided that they still wanted to do something with I was living in Seattle at the time, and had just come back from a trip to Germany. I was inspired by the and burgeoning bar scene in Seattle. I wanted to see more of that come to Salt Lake. Originally it was supposed to be called Hops and Rye. I spent months working on the concept and branding, and nothing took. The architect came up with the name Purgatory as a working project name. It was never intended to be called Purgatory, but after months of working on it,  I decided to play around with Purgatory, and it just clicked. It’s also next to the Mortuary and Suicide Lane Cycles. It was just fitting to the neighborhood.

How was it like gutting the place and refitting it to what you needed it to be?

Diamond: Mai is the mastermind behind all the design and construction for all the restaurant projects we do. The majority of the work was contracted out, but much of the finish work was a family affair. My brother-in-law, Vincent, did all the metal workings in the bar.

What was the plan going in for the darker design and more rustic-looking furniture?

Diamond: I’m not sure that we were trying to go for dark, but we wanted to create a space that you would feel comfortable hanging out. We wanted to make it feel cozy and welcoming. Hopefully, that comes through.

What was it like working with the state in getting licensed, especially with so few available in Utah?

Diamond: The licensing process is always tedious. We lucked out and had an opportunity to purchase a bar that decided to close its doors.

The menu is short, but it looks awesome. How did you go about putting together a selection to fit your bar?

Hiro: The menu is kinda short, I guess? It's definitely not Cheesecake Factory size. But thank you, I’ve been working relentlessly to get this menu to look decent!  My menu was mostly inspired from the time I was living in Tokyo. Surprisingly, they don’t have too many bars in Tokyo like we do here.  Most bars in Tokyo were either for foreigners, or they were these things called "snacks," where they would have some lady designated to talk to you, it was weird. Eventually, though, I made some friends and they introduced me to the Izakaya’s, which is I found out is the real Japanese bar. So the ideology behind the Izakaya’s are simple: You go there with your friends and fam and eat a lot and drink a lot. Everything is relatively cheap, nothing over $10, so you end up trying almost everything on the menu! It was absolutely my favorite thing to do in Japan!  So with Purgatory,  I wanted to recreate that kind of feel with my menu. But instead of making a bunch of stuff I ate in Japan, I wanted to create something unique and make American food with sprinkled with a little Asian. 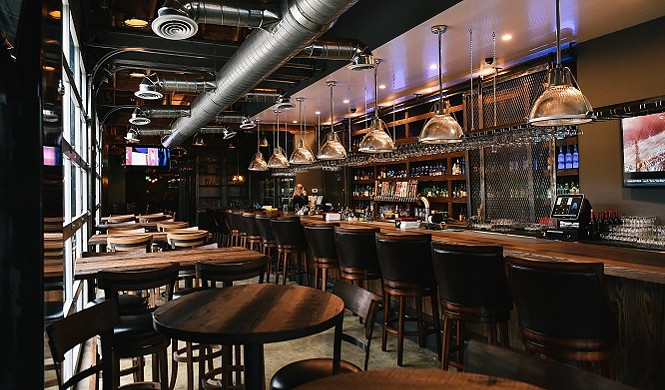 What was it like first opening up and getting the word out? What's the reaction been like so far from patrons?

Hiro: To be honest, we didn’t really do much to get the word. Which was great for us because we kinda suck at the whole social media thing. But yeah, we have been getting a decent amount of people showing up every day after day. So we are very grateful for everyone giving us a try.

Do you have any plans to expand the business in the summer or are you mainly just seeing how things go for now?

Hiro: We are going to expand in ways of the patio. We will have a stage set up for bands to play, a giant projector showing some videos and such, and more seating as well.

What can we expect from all of you and Purgatory over the rest of 2017?

Hiro: We are expecting a lot more debauchery and forgotten memories from all our patrons, haha. Seriously, though, we are expecting menu changes throughout the year, more games for our patrons, such as indoor and outdoor bocce ball. And you can expect a ramen shop from us as well.