Chatting with one of the guests for the Grid Zine Fest on April 8.

A while ago we chatted with the crew of the Griz Zine Fest as they were starting to launch and getting their bearings as far as what they were going to do in the community. On April 8, they'll be launching their first official festival at the Salt Lake Arts Academy with workshops and guest speakers. One of those guests is Ella Mendoza, an influential figure in both the zine and LGBTQIA+ communities, who will be presenting "How Our Art Is Liberation: Zines Of Resistance" that weekend. Today we're chatting with Mendoza about her creative and activist careers, taking a look at the work she's done and  the workshop she'll be hosting. (All pictures provided courtesy of Mendoza.)

First thing, tell us a little about yourself.

Hello! My name is Ella Mendoza, and I’m a 26-year-old undocumented artist and writer who lives in Salt Lake City. I love to bicycle around the city, and my favorite colors are turquoise and yellow.

What first got you interested in writing and the arts growing up?

I’ve always been obsessed with colors. Growing up, I remember making new colors out of old ones was my favorite thing, I was obsessed with pastels and would make them out of everything, by mixing condiments in the lunchroom or bleeding ink pens into white-out jars. I was also really shy and would often skip class to go to the school library. I think at one point one of my aunties asked me, “You love reading so much, have you thought about writing your own book too?” But I never really wanted to write, I just wanted to make something, anything really, as long as it moved me. It took me years, but I eventually got into writing a bit in high school, mostly sad poetry inspired by teenage angst and goth songs. 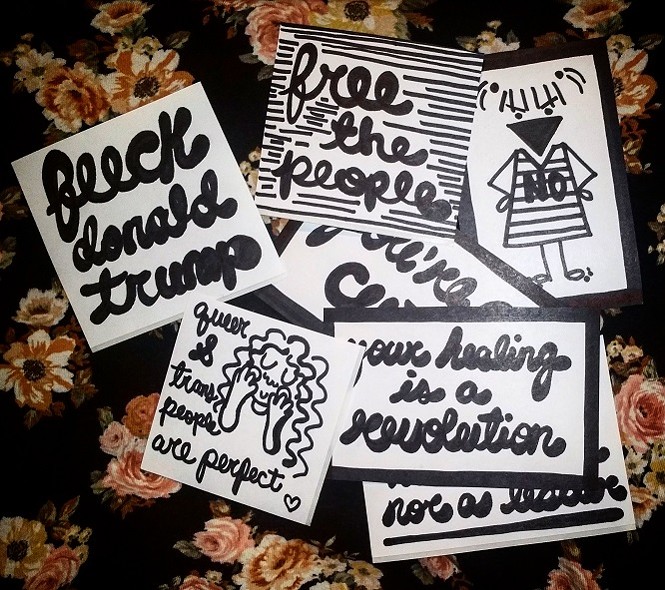 You're originally from Lima, Peru. What eventually brought you to America and eventually living in SLC?

My family migrated here when I was 12 years old because of financial troubles. I remember growing up and asking my father why we couldn’t take vacations anymore, or go to the pool like we used to. As it turns out, we were saving money for our flight to the United States. My family chose Utah because there’s (apparently) a lot of jobs here, and we wound up in a suburban neighborhood up in Layton. I would always look forward to our drives to Salt Lake City; it seemed to have everything that my neighborhood didn’t, and there was so much to look at always!

What was the big catalyst for you that made you want to create and get involved with the community?

I started getting involved with the Salt Lake City community before even moving down here. In a way I moved here because of this community; it made me want to get involved. As an undocumented immigrant, I wanted to reach out and participate in the national movements against deportations and detentions, and in 2013 I joined other local undocumented folks who also wanted to see a different world. These homies became my family, and connected me to many different issues in Salt Lake City. We’ve been through everything together—detention, actions, life. My community is the reason why I’m involve. I would never let anyone hurt them, and we live in a system that exists to do just that. In 2015, my mother was approved for a visa, and I was excited to be reunited with her, but didn’t have the money to buy her plane ticket. I started creating art as a hustle; I printed out some drawings that I had made earlier in the year and sold them, and made enough money for us to reunite in December. It’s been over a year since then, and reuniting with my mother made me want to create more art and write more. It made me feel connected to a world outside of Salt Lake that had existed inside me all along. I create visual art because I want to make you feel what I feel. Same with writing. I want you to see this cultural melancholy breaking my heart wide open.

What led you to work with Peaceful Uprising and how was your time with the group?

I started working with Peaceful Uprising as I started working with other migrant groups in 2013. Peace Up was having a workshop on connecting the dots of climate justice to the climate of oppression in our current lives, and they looped me into their work against land extraction happening in Utah. Within a few months we were all camping out at the protest camp up in the Book Cliffs, and it was so beautiful out there. I just kept thinking, “Why would anyone want to turn this canyon into a desert of oil and death?” I’ve been back every single year since then, and am currently gearing up to go back up there this summer.

What inspired you to form Familia? What kind of impact have you been able to make with the LGBTQIA+ community?

Familia started out as a bit of an aftermath for me and other undocumented queers in Salt Lake City. We had just disbanded from our old organization because of differences in politics and praxis, and we were disillusioned with single-issue organizing—it just doesn’t work, you know? We couldn’t stop being undocumented, and we also couldn’t stop being queer, but the way that it’s set up in Utah, it forces you to do just that. We worked together with the national team of Familia: Trans Queer Liberation Movement, and set up a Utah chapter as a way for local people of color (who are also part of the LGBTQIA+ community) to meet up, connect and find ways to advocate for each other, and support each other, on their own terms. Together we have managed to stop several deportations, demand the release of our friends in detention, and start local conversations about diversity within the LGBTQIA+ community in Utah. Our impact is not about changing laws, but about building a network and a space for our people, whose very bodies and existence are in danger. We’re not trying to change the system, we’re trying to question the existence of the system, and build our own ways to keep our community safe.

Currently, you write for The Body Is Not an Apology. What drove you to be a part of their site and what kind of content do you usually write on?

I first heard of The Body Is Not An Apology about two years ago. They were always publishing great content that seemed to emphasize on concepts that I was (and am) still learning a lot about, such as body love and resistance as a response to trauma. I first applied in October 2015 when I was getting ready to reunite with my mom. It was a really chaotic time, and my writing was all over the place, so I was both sad and relieved when I didn’t get it. I applied again in May of last year and have been writing with them since then. I decided I wanted to be a part of TBINAA, because of the way that they emphasize on the connections between unapologetic love for yourself, and your community, as well as what this means in terms of autonomy and liberation: How can we take care of ourselves and each other in a world that seeks to kill us? A lot of my writing is in direct response to this question, and my content is based on the needs of my community. I want to write the love letters I needed growing up, but never got. I want to respond to the questions that I always had, but never asked. I want my writing to be a tool of liberation, and of representation.

How did you become involved with the zine culture in SLC? What have you personally done to contribute to it and influence the direction of some publications?

I started making zines only about a year ago, after attending the Feminist Zine Festival in New York City. It was so exciting to see all of the amazing work being done by zinesters there, and I was curious to see what kind of work was going on with the zine scene here in SLC. I got in touch with some of the Pillars of Salt folks as well as the We Are Here crew, and got really excited—it’s like a whole different world, you know? I personally don’t feel like I’m contributing much to the SLC zine scene, at least not by myself. All of the amazing influence in our culture is being done by many different folks pushing for that cultural shift.

You'll be holding a workshop at Grid Zine Fest in April. What made you want to do a workshop with them?

I wanted to do a workshop for the Grid Zine Fest, because I wanted to make sure that voices like mine were being represented and heard. Salt Lake City is a wonderful city in many ways, but still has a long ways to go, and being active in this community has taught me that. It’s not enough for us to decide that we are “radical;” we must take action and change our own ways of thinking and routine in a “radical” way as well, and that means art too. Zine culture is all about “Doing It Yourself,” and that in itself is a step towards autonomy, towards looking for alternative ways to create, think, write and move forward, and we can do that. But we must never forget that as we do this, we have to listen to marginalized voices, listen to our community and listen to our neighbors.

Tell us about the workshop and what you'll be presenting.

I will be presenting a workshop titled "How Our Art Is Liberation: Zines Of Resistance." In this workshop, I hope to present some of the amazing work being done nationally by artists and writers, as well as some of the history of resistance in zine making. The layout will be very loose, but will have the opportunity for folks to learn about techniques being used in other DIY settings, as well as to create something to take home and utilize in their daily resistance.

What do you hope people will take away from it and utilize the most?

I think, more than anything, I’m excited to host a space in which folks can ask questions, as well as share skills and knowledge with each other, and myself! We intentionally set this workshop up towards the end of the day, after both the Pillars of Salt and We Are Here panels, and I’m excited to see what kind of discussions this will bring to the workshop. I really hope that people can at least take away ideas. Ideas are so dangerous and have so much power to them. They might be the most dangerous thing to have nowadays.

What else are you currently working on and what can we expect from you over 2017?

I’m currently working on a big girl zine called Taking Up All The Space: Hijacking White Spaces And Resources, which will hopefully be released in the fall. I’m also working on a lot of digital art and writing a lot, as well as traveling. I guess you can expect me to be here, holding space and sharing space with folks, fighting back in my own way, because that’s the only way I know how to.