Gordon Hayward and the Fan's Lament

What do pro athletes owe us, and why do we assume it's anything? 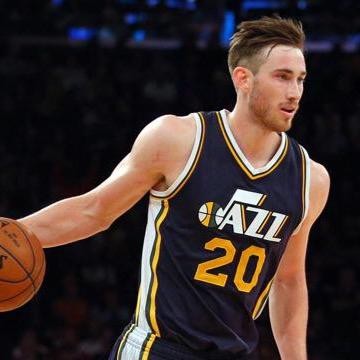 For approximately six hours on the Fourth of July, Twitter completely lost its collective mind. Those who spend much time on Twitter will respond with "so what else is new," but the subject of the mind-losing for once wasn't political, or even something a celebrity said or did. It involved a 26-year-old man deciding where he was going to work.

That is perhaps over-simplifying things. The 26-year-old man in question was Gordon Hayward, the Utah Jazz All-Star forward whose free agent status had local NBA fans chewing their fingernails to the quick. Would he abandon the Jazz to play for his college coach, Brad Stevens, with the Boston Celtics? Then on Tuesday morning, an ESPN reporter broke the story: Hayward was indeed going to the Celtics. Hayward's agent quickly responded that no decision had been reached. Fans in Boston and Utah were left in limbo, and social media blew up. Was this a case of an accurate story simply proving to be a potential embarrassment to Hayward, because he hadn't yet notified the Jazz of his decision personally? Would the leaked story result in Hayward backing out of a handshake deal because he couldn't trust the organization? Was there never a handshake deal to begin with? And why wasn't Hayward resolving all of this by telling everybody what they wanted to know now now NOW?

Most fascinating, however—if not at all surprising—were the emotions displayed by fans of both teams. Jazz fans prepared to burn Gordon Hayward jerseys. Celtics fans fretted over his indecision, often suggesting it was a sign of weak character, or that he was just trying to avoid looking like a villain. In all these cases, though, people were treating a relatively commonplace phenomenon—a person choosing between alternate employment opportunities—as though they it had anything whatsoever to do with them. Because sports makes us stupid.

I love basketball. As my attachment to the other sports I grew up watching dwindled over the years, I've remained a steadfast fan of the NBA. Though I grew up in California as a Lakers fan, I moved to Utah 20 years ago in the summer between the Jazz's two NBA Finals appearances, and it was easy to embrace the local team's Jerry Sloan-inspired hard-nosed work ethic. Over the ensuing two decades—through Andre Kirilenko and Deron Williams and Carlos Boozer and yes, Gordon Hayward—local TV made it easy to watch a lot of Jazz games, which engendered a certain connection to the team. Yet I've also been able to maintain the distance that comes from realizing that the curious triangle of team, player and fan is not equilateral. The fans  invest themselves emotionally in, and expect loyalty from, a business and its employees. Ask NBA fans in Seattle  (or NFL fans in Oakland, or baseball fans in Brooklyn) how that worked out.

I love basketball because I love watching great athletes at work. I don't need to live or die with whether My Team wins and Your Team loses; the game can be enjoyable to watch either way. For some, personal emotional investment adds to the euphoria of the experience, but it also leads to a misguided, unwavering devotion that teams are only too willing to exploit if it means you'll buy merchandise and season tickets. Apple vs. Android. Marvel vs. DC. Utah vs. BYU. Irrational fandom is a piece of a marketing plan. You are a customer of a company, and your brand loyalty exists in one direction.

Gordon Hayward is a guy who had an opportunity to choose where he wanted to work. He wanted to work in Boston. The belief by Utah fans that this decision constitutes some kind of betrayal must make team executives ecstatic, because it furthers the notion that tribal brand loyalty supersedes a person's individual choice. Did Hayward choose Boston because of money? Because of perceived better opportunity for a championship? Because he wanted to reunite with Stevens? Because he just likes the city of Boston? Who gives a shit? Unless, of course, you believe the consensus of millions of strangers should be a factor in your own employment decisions. Or your insecurity as a resident of this state leads to you considering it a personal affront when somebody decides to leave.

So sure, burn your Gordon Hayward jerseys. Boo him lustily when Boston visits Utah next season. Persist in the belief that this game—entertaining though it may be—is at all about you as anything but a spectator. Because sports makes us stupid. Gordon Hayward owes you nothing. The Utah Jazz owe you nothing. Make peace with the reality that you owe them nothing as well.