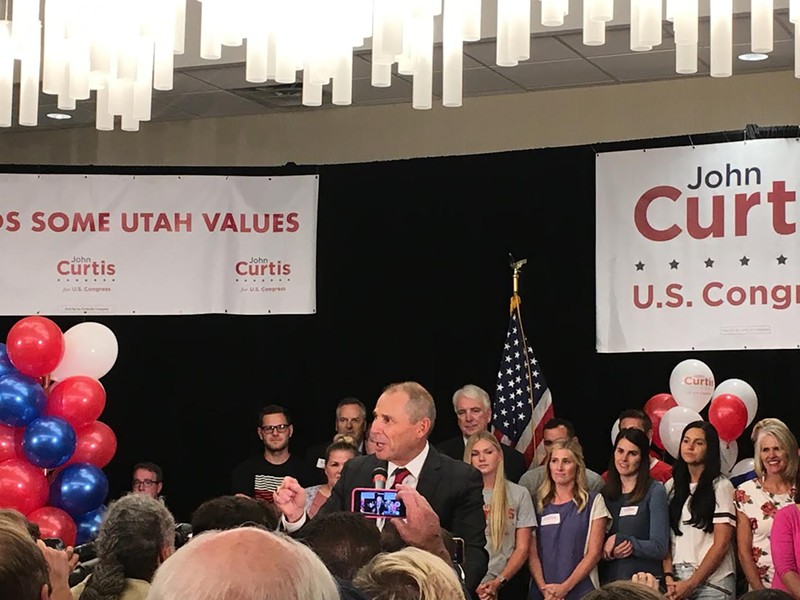 John Curtis wrote two speeches for Tuesday night’s primary. He summarily ripped up and tossed aside the concession version shortly after the Associated Press called the 3rd District GOP primary in his favor.


Painting himself as an underdog battling against Washington, D.C.-based super PACs, Curtis said he prevailed when others said his campaign couldn’t succeed with local backers.


“This is my town, this is my district. Go home, you wasted your money,” he said to loud applause.


Curtis congratulated his Republican opponents, Chris Herrod and Tanner Ainge, for a hard-fought challenge and asked to earn the votes of their supporters.


The celebrations started early at the primary party.


Initial results that led to a celebratory cheer sustained the energy at Curtis’ election-watch party in downtown Provo Tuesday evening. At that time, with an estimated 50 percent of the vote counted, he pulled ahead 13 points above Herrod, his nearest competitor. Ainge, trailing the other two GOP candidates with about 27 percent, conceded around 9 p.m.


Curtis served as Provo mayor for more than six years. Before holding office, he worked at O.C. Tanner and later opened his own business, Action Target.


Party opponents criticized his political past, most notably his bid for a legislative seat in 2000 when he ran as a Democrat. Curtis has referred to this period as his time on the “dark side.” But voters like Susan Anderson of Pleasant Grove consider Curtis’ familiarity with opposite parties to be an asset. “I want someone who can listen to both sides because I really believe in politics,” she said at the party. “You don’t get everything you want and you shouldn’t. It’s really about compromise.”


Anderson also appreciated Curtis’ willingness to listen to her, and she praised the city he has run for the last six-and-a-half years: “There is an energy and a light in Provo as I have not seen in a long time,” she said.


Gov. Gary Herbert milled about in the crowd after the race was called. Then the governor took to the stage and congratulated Curtis for running a “high-road campaign,” before calling the mayor to the stage.


An in-studio debate broadcast earlier this month on KSL’s The Doug Wright Show turned testy when Curtis accused Ainge of sending out mailers that distorted the mayor’s record and depicted Curtis in an unflattering, photoshopped picture wearing an ill-fitting suit. Arguing that he wasn’t running a negative campaign, Ainge retorted that highlighting Curtis’ record was “fair game,” and further argued Curtis looked good in the picture.


“We’re so proud we did it the right way,” Curtis said after winning the bid. “We can do things differently.”

Wayne Johnson, a Provo resident and former neighbor to Curtis, called him a principled man and a transparent politician. “Almost immediately, he started a mayor blog. He posted his personal cell phone number on the blog,” Johnson noted.


Nearly 20 Republicans filed to run for Jason Chaffetz’ seat, which was vacated earlier this summer. Herrod was picked by the caucus to advance to the primary.


Curtis will now face Democratic candidate Kathie Allen in the primary, as well as a scattering of third-party and unaffiliated candidates.


While the congressional race demanded the spotlight, numerous municipal races will also be decided by Tuesday’s vote. Four seats on the nonpartisan Salt Lake City Council were up for grabs with a spate of candidates running in each. The top two vote-getters advance to the general election. Salt Lake County will update the results on Wednesday and throughout this week and next as needed. Here were the leaders by the end of the night Tuesday:


District 3: Phil Carroll led all candidates with nearly 33 percent of the vote. Chris Wharton was a close second with 31 percent.