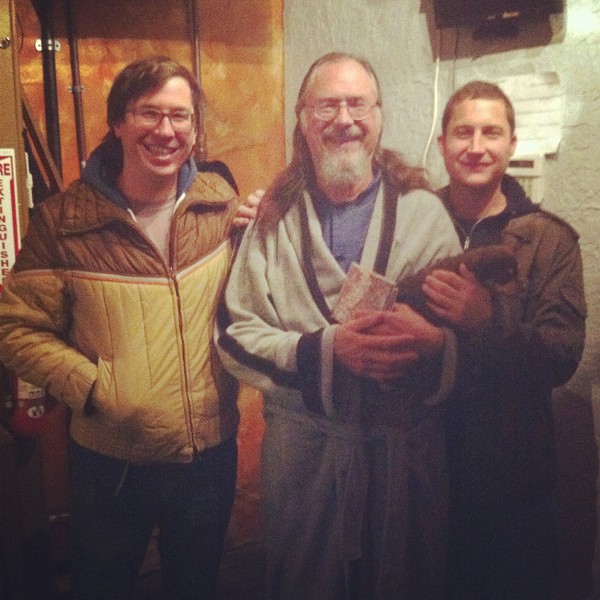 Sartain Night: Father-Son Rock ’n’ Roll
Happy 70th birthday to Gene Sartain, whose mighty loins thrust forth 50 percent of the DNA necessary to make Mike and Will Sartain—a couple of dudes who’ve made an indelible mark on local music. Gene’s no musical slouch, himself. I met him while working at The Event NewsWeekly almost 20 years ago. He’d just released Home (genesartainolddognewtricks.bandcamp.com, 1997), an album of mellow folk tunes that merged the erudite writing of Richard Thompson with the gentle storytelling of Harry Chapin.

This morning’s conversation was our first exchange since that interview. Sartain still plays music every day, and he even released an album with the band Old Dog New Tricks (Things You See) in 2013. He’s also worked with the local music charity Heart & Soul for the past 23 years. His birthday wish this year is to share the stage with his boys, which they’ll do Sunday night with a free show at The Urban Lounge. “It was my suggestion,” Sartain says. “I said to my sons, ‘It’d sure be nice if we could share the stage, ‘cause I’m at the end of the line now—I’m 70!’”

He sees his boys frequently in spite of their own busy schedules. Mike fronts long-running local rockers Starmy while finishing a communications degree at the University of Utah. Will fronts or has fronted a variety of top local acts (Redd Tape, The Tremula, The Future of the Ghost, Hang Time), and is the Sartain in local concert-promotion machine Sartain & Saunders. But the elder Sartain doesn’t write as many songs nowadays, saying he lacks the necessary energy and ego—but he still likes to play. “It’s my drug of choice; I play every day. I’ve got a bass that’s fretless. It’s challenging. I still play guitar and sing and play the Irish flute, too. I’m not a 70-year-old couch potato.”

Gene says he’ll open the show solo with a set of his favorite songs, including “I Shot the Sheriff” along with “old Clapton and ZZ Top.” Then he’ll be joined by Mike and Will for a half-dozen songs as an electric trio, followed by sets from Starmy and Will, leading a band of local all-stars. Asked if he’ll pop back onstage for an encore, Gene says, “I don’t know. I’ll be there. I might if they want me to; I’ll do whatever they want.”

It’s his birthday, and his wish, but it’s an experience for them all—similar to the annual vacations Gene plans for his sons and daughters and their own families. “I’m tryin’ to make a memory for them, so they have instincts about family,” Gene says. “I think that’s important. At the end, we don’t take anything with us. But we do have our memories; we have the things that are in our heart. That’s where I focus these days.” Sunday, Sept. 17 at The Urban Lounge, 241 S. 500 East, 7 p.m., free, 21+, theurbanloungeslc.com

Vibe 3.0: EDM for the ASL Crowd
Most of us hearing folks know that deaf people can still enjoy music by focusing on the physical sensation produced by both rhythm and melody. But how many of us have experienced the communal magic of live music with someone who is deaf or hard of hearing? Probably not many. I certainly haven’t, and I have deaf friends and acquaintances. So the opportunity to share music with them is appealing to say the very least. For the past three years, musician and promoter Maclain Drake has staged Vibe, a multi-sensory event tailored to deaf, heard of hearing and hearing people alike. The music of Pulse Regime, Josh Volt, Kwantum and Wat Music? will be set to visuals, scents, feelings and tastes using what Drake terms, “some wicked technology.” Vibe is meaningful, Drake says, “because it’s music we enjoy every day, being understood by an audience that most don’t think about.” Friday, Sept. 15 at SKY, 149 Pierpont Ave., 9:30 p.m., $10 presale; $15 at the door, 21+, skyslc.com