World premiere leans into the power of simple kindness 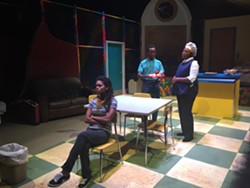 There are moments when all you need is to be reminded that humanity is not irredeemable, and that people sometimes reach out to one another with love. In a world that feels broken, we need art like Chisa Hutchinson's Surely Goodness and Mercy.

Salt Lake Acting Company presents the rolling premiere of the New Jersey-based playwright's story about a 12-year-old African-American boy named Tino (played by Clinton Bradt  on opening night, part of a split cast for the young leading roles) who seems to have three strikes against him in his tough neighborhood. His single mother has died, leaving him in the care of his hard-hearted Aunt Alneesa (Michelle Love-Day). He's a bookish good student who carries around a Bible. And his best friend seems to be the cafeteria lunch lady, Miss Bernadette (Yolanda Wood Stange) who keeps an eye on him. But when Bernadette's health begins to fail, it's Tino who makes it his mission to help her.

Set designer Thomas George provides a wonderfully versatile space for the small Chapel Theater, allowing action to take place in multiple different locations. He sets the emotional tone for the piece by surrounding the set with institutional chain link fence, but coloring that fence with rainbow bursts of paint. This might be a simple place, but it's a place of hope.

Hutchinson's text builds on that hope with dialogue that's at times darkly honest, yet still often tart and funny. Stange's performance as Bernadette easily could have been a cliche—the solitary, hard-nosed sort who actually has a heart of gold—but instead maintains a prickliness that feels authentic even as the bond with Tino grows. Love-Day similarly has a challenge in finding humanity in the abusive Alneesa, but she captures frightening casualness of the character's anger in her bitterness at getting stuck with a parenting role she never wanted. The young actors are also strong—Jenna Newbold playing Tino's classmate Deja opposite Bradt)—though the staging of some scenes is a challenge when Bradt and/or Newbold are playing opposite a recorded voice of a minister or teacher.

What really sends a viewer's heart soaring in Surely Goodness and Mercy, however, is Hutchinson's ability to make a simple act of generosity feel so powerfully vital.  It's also refreshing to find an artistic work that portrays Christianity as the force for good it can be for those who put its truest principles into action. There's nothing remotely cynical about the way Hutchinson believes people can be inspired to their best selves, by faith and by the deeds of others. In 2017 America, that's enough to bring a tear to your eye, and joy to your soul.