Jean Caffeine at Piper Down, The Iron Maidens at The Royal 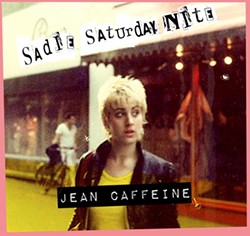 TUESDAY 10/10
Jean Caffeine
Don’t you hate when a really special show sneaks into town and you miss it? You know, like Ken Stringfellow did with house concerts by The Posies and his solo band last month and last year, respectively? Well, here’s one that I’m pissed to have to miss—but at least I can tell you guys about it. Jean Caffeine is a legend of punk rock. She played drums in the San Francisco all-girl punk band The Urge and Pulsallama (with actor/rocker Ann Magnuson!), formed Clambake with noted music journalist/author/producer Holly George Warren and even worked as an animator on Richard Linklater’s film Waking Life. She also has a string of solo releases, the latest being Sadie Saturday Nite (Joe Records), an autobiographical concept album about coming of age in the S.F. punk scene in the ’70s. “Sadie speaks to anyone who loves punk, or who’s been a part of a scene, or who’s had their heart broken,” Caffeine says in a press release. In addition to tales from her own careers, Caffeine’s show features stories about watching the final Sex Pistols show in 1978—and the day-long after-party, as well as the tale of when music fan and inveterate nice guy Bill Murray walked out on a performance by The Urge.

I’m unsure if there’s a cover charge for this one. There almost certainly will be, but it’s too early to call the venue. I’ll update the post as soon as possible. Rest assured, whatever the cost, it’ll be money well spent. But there’s good news for those of us who can’t make it down to the club, or are too young to get in—Jean’s live streaming the show here. Piper Down Pub, 1492 S. State, 8–9:30 p.m, cover charge TBD, 21+, www.piperdownpub.com

The Iron Maidens
Coming off of the incredible show at Usana last July by the actual Iron Maiden, you just want more. While the band might make it back to SLC someday, we’ll have to do with tribute bands in the meantime. We could do much worse than the all-female tribute act, The Iron Maidens. I’ve said it before: They’re catnip for metal fans. They not only capably deliver the musical goods, playing the music with all the swagger and chops as their/our heroes, but they bring the theatrical goodies, too. That includes their very own giant Eddie mascot. The fact that they play in clubs, bringing everyone to the action, makes it all the better. The Royal, 4760 S. 900 East, 8 p.m., $20 presale; $25 day of show, 21+, theroyalslc.com