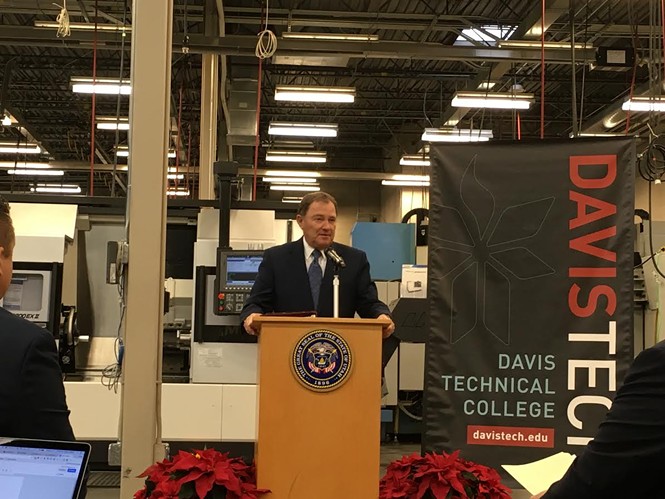 
The governor said on Wednesday that the state needed to modernize its tax system in an effort to broaden the base and lower rates. Rather than overhaul the tax code, however, the governor is suggesting smaller alterations: “tugs here, tweaks there,” he said. Those tugs and tweaks will include eliminating tax loopholes, utilizing more user fees and figuring out how to collect an estimated $200 million in unpaid sales taxes stemming from online purchases.


For the second year in a row, Herbert highlighted the “owed but not collected” revenue from internet commerce. Under Utah law, residents are required to report online taxes, but the government has little recourse for those who don’t.


“If you purchase something, you have an obligation when you fill out your income taxes during tax season, to say ‘I bought this much goods and services, and here’s the sales taxes that I owe,’” Herbert said.


Herbert suggested the need for a “frank and open discussion” among the lawmakers next session, although pulling in online sales tax money might require federal action.


Part of the necessity to reform the tax system comes with a changing economy. Four decades ago, about 70 percent of the state’s GDP was built on sales tax, according to Herbert. Today, that number is around 40 percent.


Proposed user fees are a way to ensure residents and entities using a service bear a greater payment responsibility. At times, user fee-type taxes are out of sync. Take, for example, the gas tax, which helps fund road costs. Fuel-efficient cars and electric vehicles have altered the revenue stream without necessarily reducing traffic on the highways.


“Right now, 55 percent of our costs of roads and maintenance comes out of our general fund,” Herbert said.


If collected, Herbert guessed that the Legislature would allocate a considerable chunk to education. Of the $484 million in new revenue added to the state’s $16.7 billion budget, about 72 percent is being proposed for education. This would allow the state to increase the amount it spends per student by 4 percent.


He introduced the budget at Davis Technical College—a trade school in Kaysville that offers a number of certification programs. The state is asking that about $7 million be set aside for technical schools.


Herbert also announced allocating $34 million for a new facility on the Davis Technical College campus. “More than a partridge in a pear tree! You’re getting a new building here,” Herbert said.


Herbert recommends more flexibility in the transportation fund to be used on public transit.


Often at odds with the GOP governor, Utah’s House Democrats sent out a response commending Herbert for focusing on education, transportation and air quality in his proposal.


“This is a good place to start for a budget bid,” Rep. Joel Briscoe, D-Salt Lake City, said in a statement. “We think he’s got some good policy ideas here. Helping at-risk kids, increased education funding and a continued focus on improving air quality are all things Utahns want to see happen.”