‘We Are United’ | Buzz Blog

Hundreds gather at Capitol as part of national 'Rally Against Racism in the White House' movement.


Or, as Moroni Benally said Monday on the steps of the Utah State Capitol, “Enough is fucking enough.”


Benally, co-founder of the Utah League of Native American Voters, was joined by around 250 others who gathered for a “Rally Against Racism in the White House.” The rally took place not only on Martin Luther King Jr. Day, but less than a week after reports emerged of President Donald Trump’s “shithole countries” comment.


“Today, we stand against outright racism that exists within the highest levels of our government,” Benally said. “We gather today to express our collective discontent and anger and frustration for the White House that is taking us back.


“We are regressing because of what is happening right now.”


Similar to other previous rallies at the Capitol, dozens held signs denouncing Trump’s racist remarks. Shouts of “This is what Democracy looks like,” rang out as troopers with the Utah Highway Patrol looked on. One woman held up a large world map that said “First” in the place of the U.S. and “Shithole” where the continent of Africa would be. “Oil under ice” was labeled in place of the Arctic.

Benally was followed by seven other community leaders who spoke for about 40 minutes. They not only called on their elected officials to stand up to the rhetoric from the White House, but gave stories about immigrating to the U.S.


Among them was Utah Democrats Secretary Cristóbal Villegas, who recounted a time when immigration was discussed in his eighth-grade Spanish class. One student, he said, asked, “Why don't we shoot those who come into the country illegally?”

That was his first time, he said, being exposed to that kind of rhetoric surrounding immigration. Notably, the dialogue hasn’t changed much since.


“When I heard Donald Trump use the vulgar words in his office of president, I wasn’t surprised. …Just so you know, people who look like me, feel like me, love like me? We’ve heard epithets like this throughout our life,” Villegas told the crowd.


“If those nations are the holes where shit is placed into, then [the U.S.] must be the producers of that shit,” he continued.


Victoria Sethunya, who immigrated to Salt Lake City from Lesotho in southern Africa used her time behind the mic to dispel immigration misconceptions.


“I am wearing a blanket from the shithole of the Kingdom of Lesotho,” Sethunya said, showing off the colorful wrap around her waist. “The Kingdom of Lesotho was a British Colony. And to all of you who call yourselves my friends, but voted for Trump, and yet call DACA ‘something for Mexicans,’ my son was deported a few days ago because we no longer have the DACA protection. So don’t call yourselves friends.”

Kathy Smith, a local teacher who had the holiday off work, came to the Capitol with some of her friends and colleagues. Smith said they decided to make reusable signs because they have attended so many other rallies around the city and Capitol this past year.


“My message is that racism in the White House is not OK with me,” Smith said. “What surprises me, is there aren’t more people speaking out and the religious leaders aren’t speaking out.” 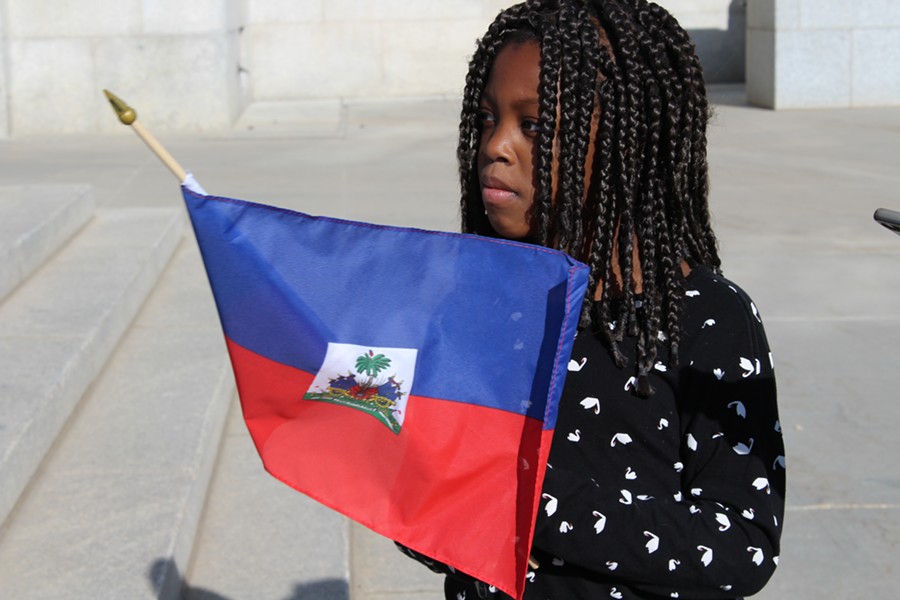 A few feet away from Smith stood three friends—Melissa Marulanda, Shelsey Salinas and Laura Santos—who volunteer with local organization Comunidades Unidas in West Valley City. Salinas said this was the first assemblage they’ve attended at the Capitol, but following Trump’s latest comments, she knew it was one they should attend.


“We came to not stay quiet,” Salinas said, “to show that we are united.”