Robin Williams: Come Inside My Mind; Juliet, Naked; The Kindergarten Teacher; and more

by Scott Renshaw and Victor Morton 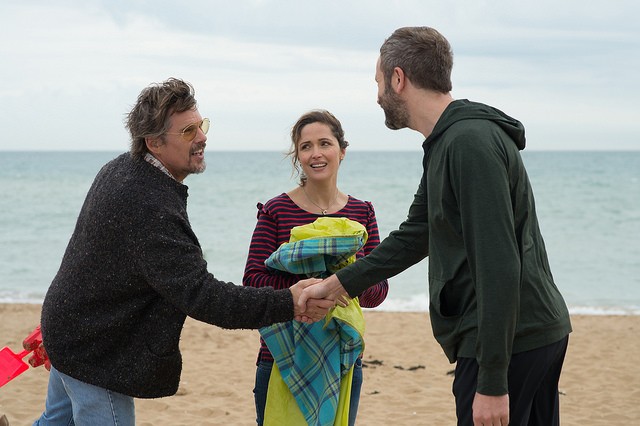 Juliet, Naked [Premieres] ***
Nick Hornby creates the kind of amiable comedic character studies tailor-made for cinematic translation, and this latest film version of a Hornby novel hits one of his favorite themes—namely, how men's relationships with their obsessions can interfere with their relationships with other people. In a seaside British town, the 15-year-relationship between Annie (Rose Byrne) and Duncan (Chris O'Dowd) begins to unravel, just as Annie is striking up an email correspondence with Tucker Crowe (Ethan Hawke), the obscure, long-retired singer-songwriter Duncan reveres. Byrne makes the most of a too-rare comedic lead role—she manages to turn a faint hand wave into an entire story about how the kid leaning on her shoulder on a train isn't actually hers—while Hawke cruises a bit on his physical embodiment of a guy who is all unfulfilled potential. Director Jesse Peretz might never strive to mine the deepest veins of material about regret over taking the easy route through lost years, so Juliet often feels fairly disposable. But O'Dowd gets a monologue that offers a great defense of caring more passionately for Tucker's work than Tucker himself does; don't be surprised if it ultimately becomes a kind of fanboy statement of purpose. (Scott Renshaw)

The Kindergarten Teacher [U.S. Dramatic] ***1/2
Writer/director Sara Colangelo adapts the 2014 Israeli drama of the same name, in a manner that somehow makes the material feel particularly American. Maggie Gyllenhaal plays Lisa Spinelli, a long-time Staten Island kindergarten teacher who discovers that one of her students, 5-year-old Jimmy Roy (Parker Sevak), may be a prodigy at creating his own poetry, which Lisa feels compelled to help nurture. This might sound like the stuff of rote “inspirational teacher” drama, but Gyllenhaal's sensational performance digs into her sense of being stuck in a mundane world, where Jimmy's gifts become a rare reminder of the artistic beauty she longs for. A subplot finds Lisa taking a continuing education poetry class and impressing her teacher (Gael García Bernal) with Jimmy's poems, and it's one of the few places where the narrative feels a bit too obvious in steering Lisa's behavior into old-fashioned mid-life crisis. While the concept ultimately takes some darker turns, Colangelo builds a psychology that sells them all, while also poking at an American culture on such auto-pilot that we don't know how to deal with anything truly extraordinary. Lisa might be a little bit crazy, but that doesn't mean she's wrong. (SR) 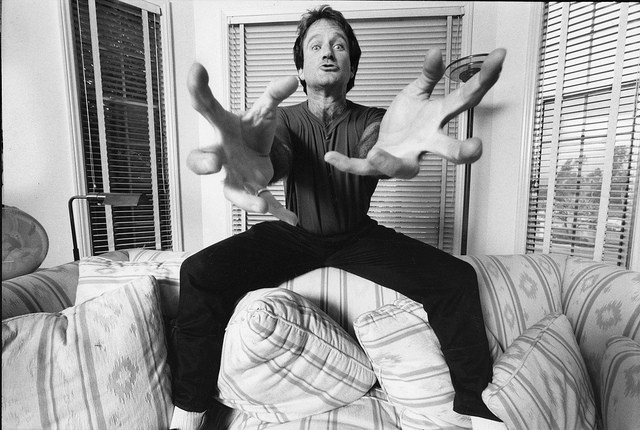 Robin Williams: Come Inside My Mind [Documentary Premieres] ***
This film is what it is and nothing more, but “what it is” is the life and art of Robin Williams, which is plenty for an entertaining, if formulaic, two hours. The film follows Williams' very publicly known life; there is really only one revelation here, related to the breakup of his first marriage. But that lack of “revelation” is its subject. Williams was a genius mimic and improv-er and the best user of stream-of-consciousness since Joyce—but his routines pushed into the public eye all his demons, related to alcoholism, drug use, depression and ultimately suicide. Director Marina Zenovich gets rare interviews from Pam Dawber and Williams' first wife and eldest son, but she also chooses her clips well, and not just for laughs or familiarity, though the alumni-photo scene from Dead Poets Society was the only possible walk-off (that theater was awfully dusty). The comic highlight was a lengthy critic-awards ceremony scene where Williams loses a best actor prize to a tie between two pretty good actors (Jack Nicholson and Daniel Day-Lewis) and steals the evening anyway, all improvised. A great film might have pushed harder how a lengthy Comic Relief routine between Williams, Billy Crystal and Whoopi Goldberg (and it's far from the only example) could not be done today. But that's not what this film is. (Victor Morton)

Of Fathers and Sons [World Documentary] ***
This is the kind of jaw-dropping documentary that's both impossible to take your eyes off and hard to think it’s great—because as remarkable as the observational scenes are, they come at the expense of shape and trajectory. Syrian-born director Talal Derki posed as a jihadist sympathizer to persuade the Al-Nusra Front—an Al-Qaida offshoot that doubts ISIS's fidelity to Islamism—to let him produce a profile of Abu Osama, one of its leaders. In the process, we observe Abu Osama's sons and comrades, and get a rare glimpse of daily life in the self-styled caliphate and of jihad soldiering. It's never uninteresting when Of Fathers and Sons matter-of-factly portrays a Bizarroworld where boys play imaginary “stoning women” games, slaughter a bird as a sacrifice and sing jihad songs. And it becomes positively chilling when this life-training matter-of-factly morphs into live-fire military-training for boys who can't even grow a beard yet. This is a lesser film than last Sundance's great Last Men in Aleppo, only because it lacks a certain kind of footage. To speak vaguely, a major character is wounded, but offscreen. And a child becomes a soldier, but rather than follow him, the film just ends. (VM)

On Her Shoulders [U.S. Documentary] ***1/2
Documentary profiles of courageous activists are a dime a dozen, but I can’t recall one that made the work of trying to change the world look quite as soul-crushing. Director Alexandria Bombach’s subject is 23-year-old Nadia Murad, a member of the Kurdish Yazidi religious minority of Northern Iraq, who escaped sexual slavery and the Yazidi genocide instigated by ISIS to become the public face of her people, including speaking before the United Nations. And Bombach does a brilliant job of capturing the emotional toll on Murad of repeating her painful story in interview after interview, and how she’s asked by others to remain stoic when meeting with other Yazidi refugees. (“They’re all getting their strength from you,” she’s told, so you know, no pressure.) Fascinating behind-the-scenes footage explores the hard work by advocacy groups of determining how to frame their public message, including realizing that one of this group’s initial goals—finding other countries willing to take in Yazidi refugees—might facilitate a diaspora that would destroy their community. But the central character study is the heart of this film, offering the revealing and somehow uniquely inspiring reminder that most heroes never wanted the job. (SR)

Believer [Documentary Premieres] ***
To quote a lyric from the titular Imagine Dragons song, first things first: This is a documentary produced by Dragons' frontman Dan Reynolds, about his struggles with remaining a faithful Mormon while opposing the LDS church stance on homosexuality, so there's no way it wasn't going to come off making him look heroic. That doesn't, however, mean that he's not heroic, at least in that small way that comes when suppressing your conscience is no longer an option, and having celebrity gives you a chance to do something about it. The focus of Don Argott's film is the efforts in 2017 by Reynolds and Tyler Glenn—the Neon Trees lead singer, also raised Mormon, who came out as gay in 2014 and ultimately, noisily, left the church over its doctrine—to put together a music festival to raise awareness about teen suicide in Utah, and its likely connection to gay youth being ostracized. The drama of trying to coordinate the logistics of the festival is interspersed with related stories, including one family's personal account of losing a gay son to suicide, and there's never a time the movie is timid about tugging on the heartstrings. But Reynolds is simply so sincere about trying to change hearts in his church community from the inside, that it's hard not to follow along on his journey, and maybe even shed a couple of tears along with him. (SR)

Bisbee '17 [U.S. Documentary] ***
Robert Greene has made two of the best post-modern documentaries in Actress and Kate Plays Christine, and here he expands to politics. He films events in Bisbee, Ariz., surrounding the centennial of a 1917 round-up and deportation of union supporters by the sheriff at the behest of copper-mining companies. The events include a re-enactment of the round-up, which some of the participants think was good, or at least necessary, pointing to the radicalism of the Industrial Workers of the World and their vow (which Greene shows) to overthrow capitalism and to destroy the war effort. The obvious inspiration is the great Indonesian film The Act of Killing, about the effects of re-enacting history, and Greene achieves some of what that film did about people “getting into” roles; one of the many people he follows is an apolitical Hispanic radicalized by playing one of the striking workers sent in cattle cars to New Mexico. Bisbee '17 is consistently entertaining, and sometimes downright funny (musical FTW!), but the events surrounding it aren’t remotely like those surrounding The Act of Killing—in scale, in historiography, in official complicity, in contemporary salience—which mutes the sting. The Bisbee residents afterwards are as friendly or humorous or “it was just a game” as two fighters embracing just a minute after they’d (really) tried to kill each other. (VM)

Genesis 2.0 [World Documentary] ***
Christian Frei’s unique documentary sneaks up on you with its thematic ideas, since they’re not at all related to what is suggested at the outset. A portion of the film focuses on Siberian men who spend their summer searching remote islands for valuable mammoth tusks ; another portion addresses geneticists doing cutting-edge work in cloning and “synthetic biology,” including the prospect of reviving a dead species like mammoths when one of the Siberian expeditions finds not just bone but intact tissue beneath the permafrost. There’s a Herzog-ian vibe to some of the early scenes, especially as Frei narrates emails to his co-director Maxim Arbugaev in a Teutonic purr. Yet while the narrative certain touches on the ethics of attempting to manipulate the building blocks of life itself, there are even more complicated ethical questions at work: how we manage to live in a world where some people pay $100,000 to clone a deceased pet dog, and others spend months in a harsh wilderness to retrieve raw materials that might not even pay for the trip. If this is in part a commentary on “playing God,” it’s also about the poor that God wouldn’t leave behind. (SR)

A Woman Captured [World Documentary] ***
Is it churlish to demand more context or drama from a documentary obviously intended to be observational and interventionist? Domestic servant Marish is trapped in a kind of slavery, and director-cinematographer Bernadett Tuza-Ritter is doing the Lord’s work in both capturing her plight and persuading her to leave it. But I was frustrated by the film’s fuzziness on how this situation came to pass and/or maintains itself; it seems to be a kind of indentured servitude to settle a loan-shark debt. But slavery is illegal in Hungary, and we don’t see force or controlling abuse (though the latter happens offscreen, and the mistress is enough of a verbal asshole to believe it). So I was scratching my head more than I’m proud to admit, because A Woman Captured is obviously remarkable. At 53, Marish looks like she’s in her 70s, and in one unforgettable photo we see her at 42, before she came to the house. She looked 42. Tuza-Ritter violates every canon of “objectivity,” assuring the unbelieving Marish that she loves her and wants to help. And the last few scenes, where Marish “begins” using her non-servant name, are as joyful as dry observational docs get. I had a lump in my throat after a job interview when she beams “I haven’t worn makeup for years.” (VM)