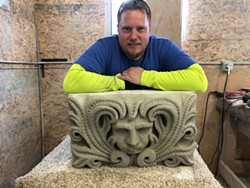 After mixing some materials, Biskupski helped with the placement of a carving of Jeff Eakle’s caricatured face just below the building’s fourth floor. Eakle, a master mason who has been honing his craft for 24 years, submitted four designs for the piece, but said officials chose the likeness of his face, keeping with the tradition of such craftsmen leaving their marks on buildings they’ve work on. (The building’s north side sports a depiction of the stone mason behind the structure’s restoration completed during the 1980s). Eakle said his facial caricature is now the third generation of such effigies on the building, counting the original mason’s.


“I’m pretty proud to have that,” Eakle said.


Originally constructed in 1894, two gargoyles used to hang on the City and County Building, but were removed around the same time the 1980s restorations were completed. Project managers, including Eakle, worked with paleontologists at the Natural History Museum of Utah to create unique carvings inspired by Kosmoceratops, a dinosaur discovered within Utah’s Grand Staircase Escalante National Monument. Those were placed on the building’s north side this past Monday.


The city started the renovation project in June 2016, restoring the stone facade, repairing windows and giving seismic updates, providing the historic building its most significant exterior work in 30 years.


After placing the stone, Biskupski said she had no plans to trade in her politics hat for a hard hat. “I’m not going to quit being mayor,” she said. “I like that job.”