Religious leaders gather at the Capitol to pray for Utahns contemplating suicide. 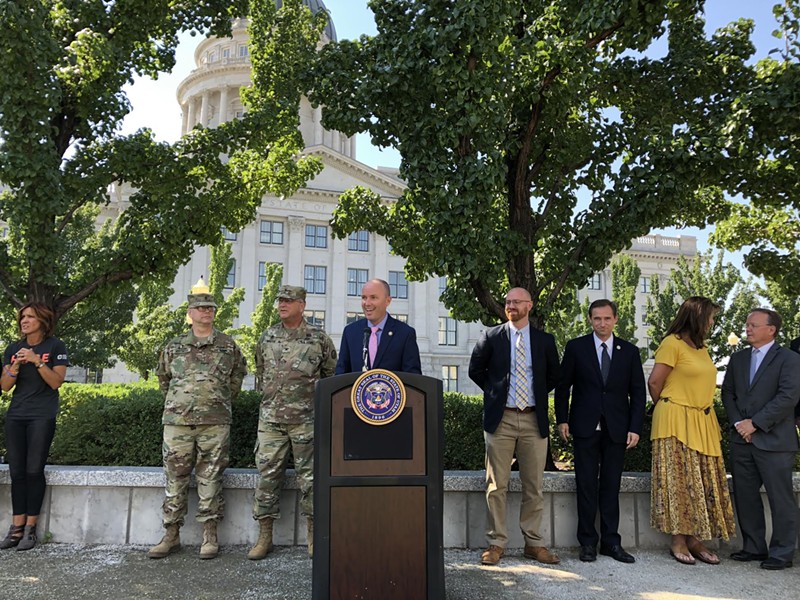 Standing on the Capitol grounds Friday afternoon, Lt. Gov. Spencer Cox both encouraged and warned Utahns planning to talk with a higher power over the next few days.


“If you are a believer, and you pray on this weekend to help prevent suicide, He will probably give you a task,” Cox, co-chair of the governor’s Suicide Prevention Task Force, said. “He will give you an opportunity to change the life of someone around you.”


Representatives from various religious denominations gathered in the Capitol’s Fountain Quad to kick off Utah’s participation in the National Weekend of Prayer for Suicide Prevention, an important cause for a state in the throes of a suicide epidemic. “Thoughts and prayers have been denigrated recently, over time, and I do understand that,” Cox said, recalling the trite saying commonly used by public officials after mass shootings. “But I want to say that I truly believe in the power of thoughts and prayers.”


According to the Centers for Disease Control and Prevention, suicidal thoughts are more common among Utah’s adults than those in any other state. Every year, 4,000 people attempt to end their lives in Utah, 500 of whom are successful.


“Despite that data, there is hope,” Cox said, because most people who plan to complete suicide do not end up making an attempt on their lives, and 90 percent of those who survive an attempt die of other causes.


Before leading the crowd in prayer, Logan Wolf, a Baptist pastor at CrossPoint Church in Provo and Taylorsville, reflected on the crisis’ prevalence. “The suicide epidemic and depression and mental illness isn’t something happening outside the church walls,” he said. “It’s something happening right there in front of you.”


Elder LeGrand Curtis, of the First Quorum of the Seventy for The Church of Jesus Christ of Latter-day Saints and the last religious leader to speak, said prayer was essential in addressing the state’s suicide epidemic, but it’s not a panacea. “We need more than prayer, we need action. Prayer facilitates action,” Curtis said, encouraging those suffering from loneliness and depression to “pray for help from God” and seek professional care.


“Talk to someone. Don’t try to endure alone,” Curtis said.


Furthering efforts to eliminate stigma surrounding suicide-prevention dialogue, this Saturday from 9 a.m. to 1 p.m., the Sorenson Unity Center will host “Start the Conversation,” a series of panels and breakout sessions aimed at educating parents and children on how to lower Utah’s high rates of youth suicide—the leading cause of death for Utahns between the ages of 11 and 17.


“We really want to educate parents, but we also want to provide resources to families and the youth,” Mayor Jackie Biskupski told City Weekly. “We’re just trying to get practical information into the hands of families.”


The city’s suicide awareness event might be more hands-on than the National Weekend of Prayer, but Biskupski suggested spirituality and practicality go hand-in-hand in addressing the state’s epidemic.


“I’m a believer in prayer. There certainly is no downside in praying about any of the issues going on in the world today,” Biskupski said. “But there is also action that has to follow and be a part of the solution.”