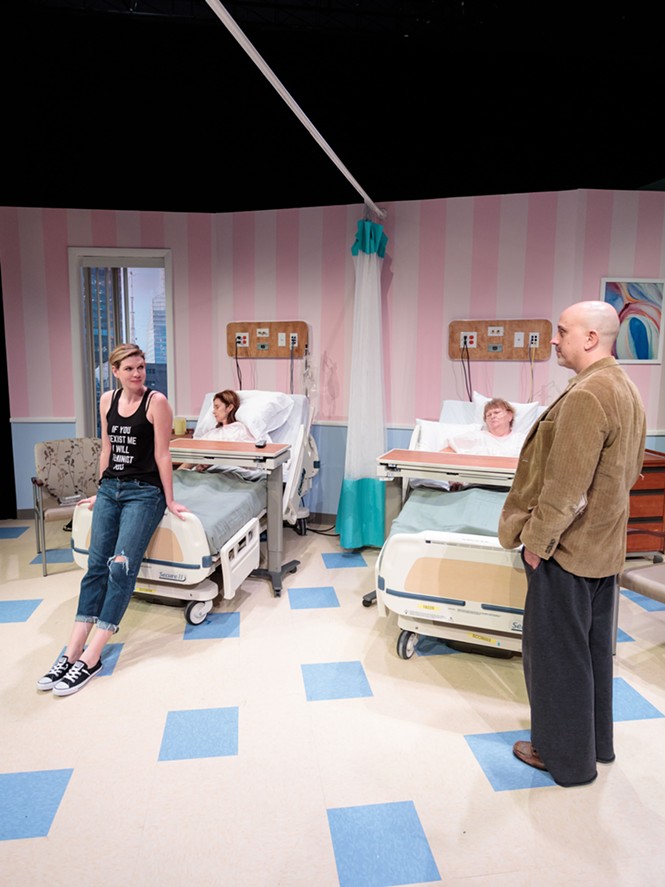 The title of Halley Feiffer’s A Funny Thing Happened on the Way to the Gynecologic Oncology Unity at Memorial Sloan Kettering Cancer Center of New York City certainly is a mouthful, but it’s also kind of fitting for a play that packs a lot into its 95 minute running time. At once a romantic comedy, a sex farce, a mother-daughter relationship drama and a study of grief and loss, it brings an acidic comic sensibility to potentially maudlin subject matter, and the combination manages to help both go down more smoothly.

The setting is a single hospital room in the titular unit of that titular hospital, where two Marcie (Marion Markham) and Geena (Annette Wright) are roommates undergoing cancer treatment. While Marcie’s daughter Karla (Cassandra Stokes-Wylie), a stand-up comedian, practices some of her more off-color material during a visit to her mother’s bedside, Geena’s son Don (Chris DuVal) enters. And from the meet-cute of arguing over the appropriateness of rape jokes for a hospital room—or anywhere, for that matter—a friendship develops.

Feiffer’s text is dense with banter, but it’s effective banter coming from Stokes-Wylie, who captures the way Karla uses language as a shield. The connection between Karla and Don takes some time to feel natural, but hits its stride once the two share an intimate encounter—terrifically directed by Sarah Shippobotham—which takes place in the room’s bathroom. There’s solid material here about characters’ experiences with death and abandonment, pausing just often enough in the rapid-fire sex talk to be sincere.

Yet the romance angle ultimately feels less potent than the stuff involving family relationships, teased out with plenty of complexity, anger and frustration. Markham becomes the cast MVP despite spending most of the show with her eyes closed, bringing to life both a kind of toxic parenting and the awareness that she’s continuing unhealthy cycles of maternal behavior. Don’s most powerful monologue addresses his fears over becoming a parent to an adopted son, and the emotions in A Funny Thing… feel most earned when the show is wrestling with cycles of feeling like your own parenting isn’t good enough, or your own parent wasn’t good enough. That's a thorny place to end when you're starting with a relationship between a woman and her vibrator.