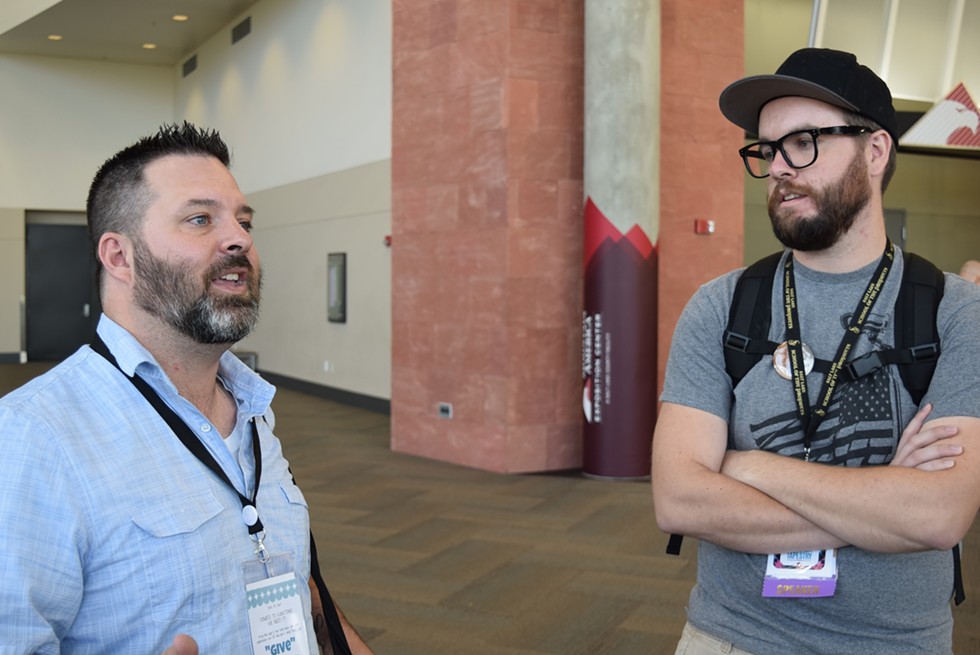 MormonLeaks released three documents Wednesday morning detailing an internal investigation within The Church of Jesus Christ of Latter-day Saints of a patriarch who allegedly sexually abused a recipient of one of his patriarchal blessings almost a decade ago, when she was 13 years old.


According to the post on the MormonLeaks website, a sister missionary asked for a new patriarchal blessing sometime before July 11, 2016, because, she told her mission president, the man who’d administered her original blessing had sexually abused her about seven years prior.


City Weekly detailed MormonLeaks’ decision whether to publish these allegations in a July 2018 cover story. Ryan McKnight, the nonprofit organization’s founder, and his partner, Ethan Dodge, ultimately decided to hold off and pursue harder evidence. "We haven't been able to verify it to the point where we're comfortable putting our seal of approval on its authenticity,” McKnight said at the time.


“We’ve had these documents for about six months,” McKnight said during a phone call a day before publishing them. “We put this leak through the same rigorous process that we put all of our leaks through, and we are confident in saying it is authentic.”


The accused previously served as a mission and temple president. He was a patriarch at the time he allegedly abused the minor. McKnight said it was unclear what his current position is. “We see him as a high-ranking official, but he’s not a household name,” he said.

The documents are heavily redacted, but they shed light on parts of the church’s investigation into the alleged abuse. The accused was a temple president in July 2016, the month time-stamped on each published document. According to an email chain posted by MormonLeaks, Randy Austin, lead outside controversy and crisis counsel for the LDS church, was made aware of the accusation and sent an email to Lance Wickman, general counsel for the church, and Kent Richards, executive director of the Temple Department, on July 11, 2016. Richards then forwarded the emails to Brook Hales, secretary to the First Presidency at the time, asking for permission to allow the accused’s superiors to interview him about the claims and begin an investigation.


Two days later, according to one of the leaked reports, the accused and his wife met with the first counselor of the area presidency. The alleged abuser said the sister missionary “lived at his home but only for a short time and that he never touched her inappropriately, or in any other way. He denies ever going into her room or that any of the described events took place. He could find no reason as to why she would make such accusations as he considers her a good girl,” the report states.


The report goes on to note that the accused’s wife “immediately denied all accusations and sustained her husband as an irreproachable person… Sister [redacted] did not allow much to get into any analysis or details of any possibility of wrongdoing at the part of her husband.” “I do hope [this leak] helps further the discussion that is already being had, as far as the church being more open about how they handle these types of complaints." —MormonLeaks' Ryan McKnight tweet this

In the document’s final paragraphs, in a section titled “Personal impressions,” the official notes that the accused appeared nervous, but that could be “normal due to the implications of the accusation.” The accused’s wife, meanwhile, did not much consider that her husband had sexually abused the young woman, instead “deviating the conversation to small shortcomings of the accuser and [her] mother,” both of whom temporarily lived at their home.


“They were both always in control and I felt, like always, goodness in them,” the report reads in its final sentences. “The case is difficult because the total denial by brother [redacted] implies that one of the parties is totally wrong, eliminating the possibility of any confusion that sister [redacted] misinterpreted paternal hugs with abusive touching.”


Six days after that initial interview, the area president and first counselor conducted a second one. On July 20, 2016, the area president sent an email to Richards recounting that exchange. The area president wrote that the accused’s wife made contact via text message with the mother of the alleged sexual assault survivor and suggested that she recant her allegation. The texts also show the sister missionary and her mother lived in their home for 11 months, not six weeks, as the accused told church officials in the previous interview. The accused was, “clear as to the allegations, that both he and [redacted] were completely undressed and in bed together on two occasions. He is also aware that [redacted] stated there was simulated sex on 12 other occasions as well as numerous instances of inappropriate touching above the clothing.”


The area president asked the accused if the alleged sexual assault survivor would have any reason to make up a charge against him. “He suggested that the only reason he could think of was that she was not satisfied with the lineage in her patriarchal blessing,” the document states. “It was clear that President [redacted] either did not do anything or had no interest in confessing any inappropriate action.”


The area president wrote that the accused seemed guarded and unwilling to “open up and share the feelings of his heart.” Of particular note were the accused’s “one-sentence denials. I did not hear very much emotion from him that he was devastated by these allegations or an empathic insistence of innocence or a request to do something, anything to clear his name. Another observation—at one point toward the end of the interview he tensed up, folded his arms, sat back, and seemed defiant.”


Toward the end of the email, the area president wrote that he and the first counselor were left with a “feeling of doubt that he [the accused] was being completely honest. To restate, I cannot say whether he did or did not do what was alleged, but I can state that he seemed guarded, closed, and not completely forthcoming.”


MormonLeaks reached out to LDS higher-ups involved in the investigation and church spokesperson Eric Hawkins. None of them responded to a request for comment. Reached by City Weekly Wednesday  morning, Hawkins said, “The church doesn’t confirm or comment on anything from MormonLeaks.”

This is not the first time such accusations have been made against LDS church officials, nor is it the first time MormonLeaks has published reports supporting such allegations. Last March, the whistleblowers released audio and a transcript of Joseph L. Bishop, former president of the Provo Missionary Training Center, admitting to inappropriate actions he had with female missionaries.


“The importance of this leak is not so much this specific case,” McKnight said. “It’s more to show how the church handles allegations like this against members who are fairly high up the food chain.”


It’s difficult to draw conclusions from this single leak about how the church investigates such allegations, McKnight added, but, “this at least gives us a glimpse of how they handled it in this one particular case.”


McKnight said he hopes the leak advances MormonLeaks’ mission by encouraging frank conversations among LDS faithful and church leaders. “I do hope it helps further the discussion that is already being had, as far as the church being more open about how they handle these types of complaints,” he said. “The more we know about the process, the more people can provide valuable input on how they can make the process better.”