The Calm Before the Storm | Buzz Blog

The Calm Before the Storm

Guv fields questions on the legislative session, less than a week before lawmakers gather at Capitol Hill. 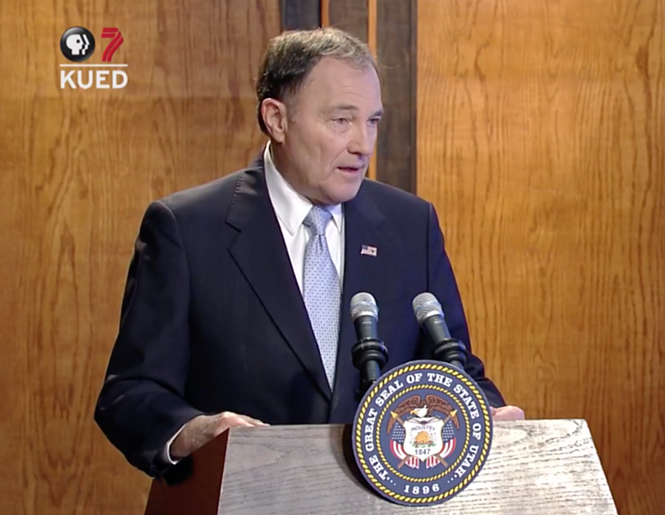 Reiterating his concern that Medicaid is the “budget buster of all budget busters,” Gov. Gary Herbert told reporters Thursday that lawmakers might need to tinker with the ballot initiative voters passed last November that will extend medical coverage to an estimated 150,000 low-income Utahns starting in April.


“The people have spoken on Proposition 3,” Herbert said. “I do expect it to be implemented at the will of the people … but as we’ve done the analysis now of the cost of Medicaid expansion in the initiative, we find that after about two years we don’t have enough money to pay for the additional costs of the state.”


Herbert was referring to a bill sponsored by Sen. Allen Christensen, R-North Ogden, that would cap Medicaid enrollment and impose work requirements on those who benefit from the program. The governor wondered aloud how the state would cover its share of the expansion in the coming years, once the federal government’s share decreases. Would the state need to take money from public education funding? Public safety? “That debate needs to happen,” Herbert said. “I expect we’re going to need to make some modifications for that.”


The musings were a part of Herbert’s monthly news conference. With the 45-day legislative session beginning Monday, Jan. 28, most of the questions Herbert answered revolved around controversial bills lawmakers have filed prior to meeting at the Capitol next Monday. “This is kind of the calm before the storm,” Herbert said, projecting that lawmakers will likely pass half of the estimated 1,000 bills proposed during the session.


Asked if he would support lawmakers passing hate-crimes legislation now that The Church of Jesus Christ of Latter-day Saints has indicated it is not opposed to strengthening the law, Herbert said it was important to protect LGBTQ Utahns. “I think the message we want to put out there is that members of the gay community, LGBTQ, are loved and welcomed and appreciated for who they are. They ought to feel safe,” he said. “Anything that can enhance that we ought to do.”


Herbert said he hadn’t yet seen House Bill 153, legislation that would prohibit Utahns from changing the gender listed on their birth certificate. “I don’t know the motivation behind the bill,” Herbert said. “But I certainly agree, again, if people want to be identified as whatever it is they want to be identified, if that’s a gender issue, if it’s a sexual orientation, they ought to have the ability to do that,” he said. “If they want to have it on the public record, there ought to be a process for that to happen.”


Herbert also weighed in on a bill proposed by Rep. Cheryl Acton, R-West Jordan, that would ban women from having abortions after the 15th week of pregnancy. Attorneys are already warning such a law would be found unconstitutional by the Supreme Court, meaning taxpayers will foot the bill for a fruitless legal battle. “Some fights are worth having, and cost is a secondary issue,” Herbert said. “But certainly it is an issue. And I expect the Legislature, when they look at the pros and the cons of this proposal, will say, ‘Well, is that worth voting for it or voting against it based on all these factors, including the cost of fighting it in court?’”


Herbert noted science has advanced since the landmark Supreme Court Roe v. Wade decision, and questioned whether abortion should be banned earlier than 20 weeks. “We ought to be sensitive not only to a woman’s right to choose and the control of her own body, but also the life of the unborn,” Herbert said. “I’m a pro-life guy.”


The governor encouraged Utahns to contact their local House and Senate representatives once the Legislature starts. “It really is a citizen legislature. They need to listen, and they are listening to the citizens, as they legislate and do their work,” Herbert said. “We do it right this year, we’ll set the tone for 2019 and maintain our lofty position of Utah being at the top of the list in every positive way in this country today.”