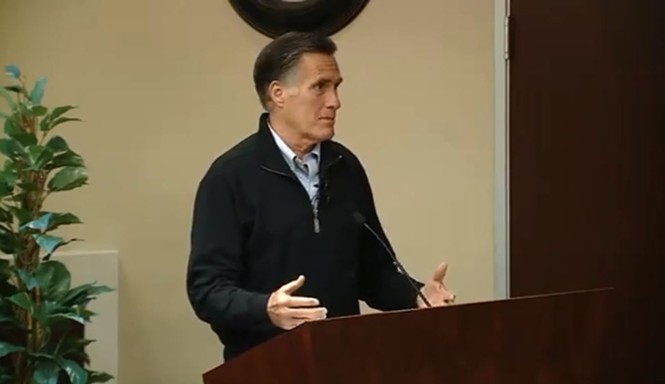 Don’t say Sen. Mitt Romney doesn’t know how to read a room—even when the lights go out.


To kick off his first town hall as Utah’s new U.S. senator, Romney asked the crowd in Farmington’s Davis County Administration Building two questions: “How many of you are really irritated or angry about something going on in Washington?” and, “How many of you are angry the government has shut down a major part of our economy?”


Almost everyone in the room raised a hand.


Minutes later, the lights went out. Someone accidentally hit the switch, but Romney didn’t miss his chance.


“That is known as a government shutdown right there,” Romney said on the town hall’s live stream to chuckles from the crowd.


Jokes aside, Romney spent more than an hour answering serious questions from constituents Tuesday night about Russian sanctions, the border wall and the ongoing shutdown. On those last two, the senator told the crowd the rhetoric has become “too hot” and said, “When we pick a corner and refuse to budge from it, it makes it very difficult for something to happen.”


“With regards to border security and a fence—funding for a fence—to a certain degree, it’s been a little hot, or perhaps more than just a little,” he said. “The difficulty is it’s been hard to find some common ground.”


Similar to what he previously told Weber County commissioners, Romney reiterated the idea that the majority of the responsibility to end the shutdown lies with House Speaker Nancy Pelosi and President Donald Trump.


“In my opinion it is wrong for people to be told, ‘You have to show up to work, but we’re not paying you,’” Romney told the crowd. “I will support legislation which has been proposed by the senator from Wisconsin, Ron Johnson. His view is that people who are in an emergency situation like this, and are required to work, should be paid.”


However, he said Trump and Pelosi “are not going to want to agree with that ’cause they want pressure to build to make something happen.”


As for immigration, Romney said the system “is an absolute mess.”


“It strikes me as making no sense at all that someone who wants to get in line legally to come to this country and work here should have to hire an attorney to figure out how to do so,” he said.


But when it comes to the wall along the southern border, Romney maintained his support.


The former Massachusetts Governor also reminded the sometimes frustrated crowd that a fair number of those who are in the U.S. illegally came here legally on visas or as tourists.


When one attendee asked whether Romney was “being a uniter as a Republican or actually being dissentive in terms of tearing apart the Republican party,” the senator brought up an op-ed he wrote for The Washington Post.


“I will stand for the president and the party when it’s good for Utah and the country. If it’s not, I’ll point out some places where I disagree,” Romney said.


But what about those tweets?