Local and state leaders worried about air quality met at the Capitol on Wednesday to send a message to Utah’s congressional delegation: Don’t let the Trump administration roll back U.S. clean car standards.


“The air pollution we tolerate today can harm the wealth and health of future generations of people that haven’t even been born yet," Jonny Vasic, from Utah Physicians for a Healthy Environment, said. “There is no safe level of air pollution, and we should do our best to eliminate air pollution as much as possible.”

Vasic was among the four officials who called on Utah lawmakers in the U.S. House and Senate to oppose an Environmental Protection Agency proposal that would curtail a regulation that helps cut down tailpipe emissions. Vasic, Salt Lake City Mayor Jackie Biskupski, Rep. Patrice Arent, D-Millcreek, and HEAL Utah policy associate Jessica Reimer argued that changing the standards would hurt Utahns’ wallets and health, costing car-owning families thousands in the coming decades. They specifically asked Sen. Mitt Romney to press the Trump administration to keep the regulation in place, harkening back to the newly minted senator’s days as the governor of Massachusetts, when he supported putting more clean cars on the road. 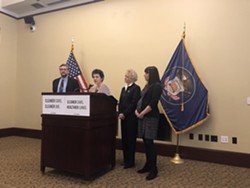 Vasic said diseases caused by air pollution, like birth defects and cancer, are similar to those caused by smoking. “Utahns deserve clean air,” he said. “In our community, air pollution is a health hazard to all of us.”

Biskupski said she has conferred with her colleagues across the U.S. about the issue. “I can tell you the nation’s mayors agree that now is the time to act to prevent future consequences of climate change. From coast to coast, cities are taking action just like Salt Lake City is,” Biskupski said, mentioning the city’s investment in its green infrastructure and its commitment to being powered entirely by renewable energy by 2032. “But it feels like every time we try to take steps forward, the federal government tries to push us back.”

Arent, the founder and co-chair of the Legislature’s bipartisan clean air caucus, said there was no “silver bullet” to cleaning up Utah’s air. “It’s a partnership,” she said, one that requires cooperation between local, state and federal entities. “Utahns want to drive cleaner cars, but rolling back these critical federal standards will just put more dirty cars on the road, leading to more pollution for Utah families.”

A final ruling on the proposal will be made in March. If implemented, the speakers warned the health of 80,000 Utahns already suffering from asthma will be further threatened. Instead, they recommended strengthening, not rolling back, the measure, which could save Utah families an average of $3,050 in gas costs by 2030.

“Now is not the time to roll back the clean car standards, which have been largely responsible for the reductions in air pollution that we have seen locally from the auto sector over the past few years,” Reimer said. “Rolling back these important standards will put the well-being of our communities and the health of our economy at risk.”