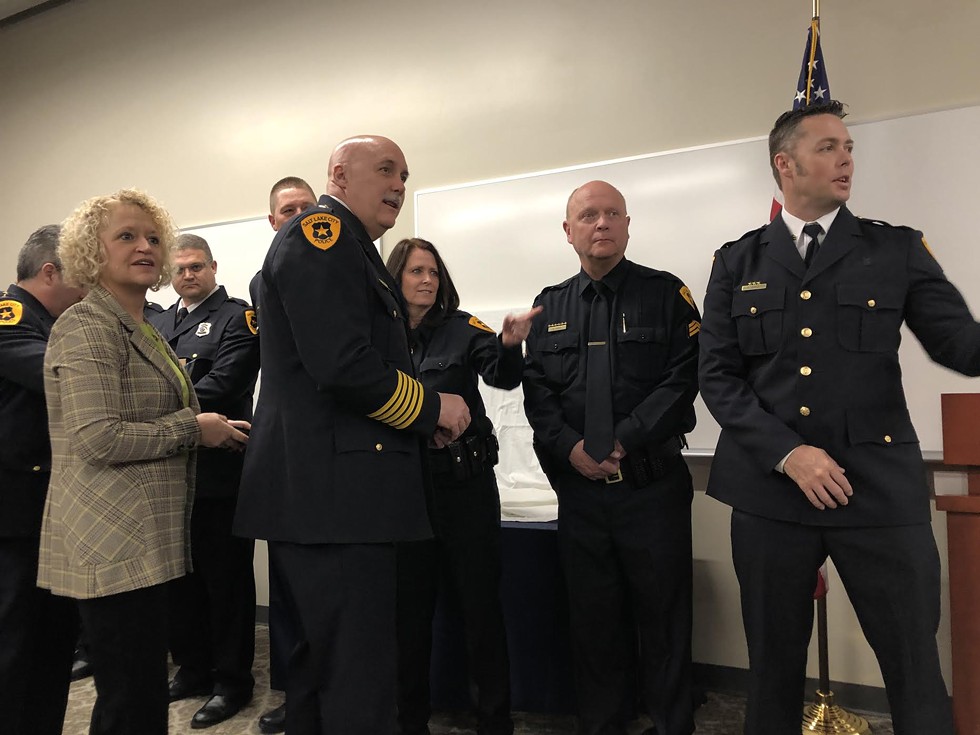 When city officials asked Craig Vargo to participate in the ceremony that retired the Salt Lake City Airport Police badge and patch, the airport police captain reluctantly agreed. “The thought of retiring my badge and patch, after 30 years of service, felt like closing the book on a story I hadn’t finished reading yet,” Vargo told a morning crowd over the din of planes flying overhead on Tuesday. “We are proud of the patch and badge we wore, and we are proud of the patch and badge we now wear, as we continue to protect our airport and serve everyone who works at, or simply passes through, the Salt Lake City International Airport on a daily basis.”

Vargo was among the more than 100 people who met at the airport’s Operations Center to honor the department’s history and celebrate the 66 police officers and two civilians who joined the Salt Lake City Police Department’s ranks after the two organizations merged late last year. Salt Lake City Mayor Jackie Biskupski and Police Chief Mike Brown pinned new SLCPD badges on roughly two-dozen airport cops as family, friends and city employees munched on a large breakfast spread. (There were no doughnuts.)


“For 34 years, the badge [that] was worn by members of the Airport Police Department has brought a sense of security to the traveling public and to the city at large,” Biskupski said in her address. “Much has changed since 1984, when the Airport Police Department was founded. Our city has grown, the number of people traveling to and from Utah’s capital city has increased and, as we all know, there are new threats to the public and their ability to travel safely.”


Salt Lake City’s airport is not the only travel hub that had its own police force. Airports in major and minor cities alike—from Los Angeles to Rhode Island, Dallas to Louisville—have their own agencies that are independent of their city’s departments. Brown told City Weekly that merging the departments will make them more efficient and allow the city cops to share detectives and public relations specialists as needed. “There are some operational efficiencies that can be broadened to help not only the residents that live here or work here, but the travelers that fly in and out of the airport,” he said.


The addition of Vargo and his colleagues to the SLCPD ranks means the city now employs 567 uniformed officers and 122 civilians, or as Brown describes it, “one patch, one badge, one big, blue family.” Former Airport PD officers have been assigned to the SLCPD’s Airport Division, meaning they will not be assigned to new beats now that they’re under the municipality's umbrella.


“Make no mistake, policing at the airport is a different game,” Brown said. “The continuity for the employees was huge. Some of the folks have been out here for many, many years.”


Brown said city police assured their new colleagues that they could remain posted at the airport. “That was a big deal to them,” Brown said. “I know that there are some strong feelings of loyalty and everything they’ve built out here, and hopefully, today, they feel like that is not lost.”