Over the phenomenally successful first decade of the Marvel Cinematic Universe experiment, the choices for directors have generally made a curious sort of sense. Despite the fact that many of those directors had never made large-scale blockbusters before, there was logic to hiring Kenneth Branagh for the Shakespearean grandeur of the first Thor, or Joe Johnston to replicate the squeaky-clean retro heroism of The Rocketeer in Captain America: The First Avenger, or Ryan Coogler bringing his seething intensity to Black Panther. So while the selection of Anna Boden and Ryan Fleck—best-known for character-based indie dramas and, more recently, for episodes of serialized drama like Billions and The Affair—for Captain Marvel, it seemed to indicate an effort to humanize a cosmic-level hero. Or maybe it was an admission, at long last, that the MCU movies were blockbuster episodes of an ongoing serialized drama.

At the outset, it seems a bit more like the former, as we’re introduced to a woman called Vers (Brie Larson) serving as a soldier for the powerful Kree empire in their long-standing war against the shape-shifting Skrulls. Vers has no memory of her life before coming to the Kree homeworld six years earlier, imbued with powerful energy blasts that her mentor Yon-Rogg (Jude Law) tries to help her control. Yet when she’s captured by a Skrull commander (Ben Mendelsohn) and subjected to memory extraction, we see dreamlike snippets of what appears to be a life on earth—a childhood trying to be as daring as the boys around her, and a career as an Air Force test pilot. There’s an impressive efficiency to the way Boden, Fleck and their co-screenwriters structure this origin story as a mystery of identity, allowing them to dive into the action without the throat-clearing that often feels so obligatory in super-hero origin stories. 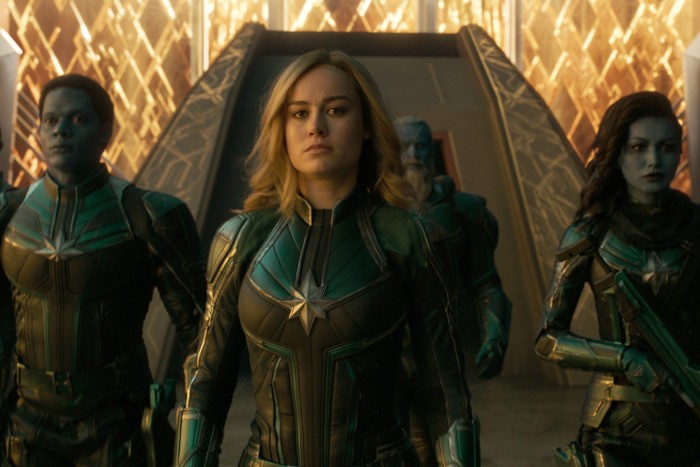 Ultimately, Vers finds herself on earth circa 1995 in an attempt to pursue clues about her lost past, teamed up with a pre-eye-patch Nick Fury (Samuel L. Jackson, given a drink from the digital fountain of youth). And it’s an opportunity for the filmmakers to have a little fun with its era, from AltaVista search engines to Vers’ confusion over how long it takes for a simple audio file to load on a computer. It’s harmless, jokey stuff, but unfortunately is more successful than most of the action sequences, where Fleck and Boden rarely prove that they’re ready for prime time. Whether earthbound or set in the stars, the battles are mostly busy and frantic, only sporadically hitting upon a truly vivid moment of imagery or an inspired bit of choreography.

That leaves the hope that the filmmakers can play to their strength as directors of actors, yet even there, Captain Marvel feels like a jumble. Jackson has some solid moments as a Nick Fury not yet jaded by immersion in a world of super-beings, and Mendelsohn—who worked brilliantly with Fleck and Boden in Mississippi Grind—has lots of often-incongruous fun as the shifty Skrull. It’s Larson who generally seems adrift, swinging between the grinning self-confidence of her pre-amnesia self and a stolid warrior lost in space and time. If the center of this story is Vers’ journey of self-discovery—and a message challenging male-centered notions of appropriate behavior, telegraphed from Vers’ very first sparring session with Yon Rogg—it keeps getting lost in all the genre stuff of star-spanning conflict and Tesseracts and whatnot and so forth. Larson manages a wonderfully fierce bravado every time Vers realizes she’s tougher than the threats she’s facing, but considering the emphasis placed on the character’s willingness to embrace her emotional side, that emotion often feels lacking.

What’s left in Captain Marvel is a story that offers a powerful, resilient heroic role model, and that’s nothing to dismiss lightly. That character is simply packaged in a movie that wrestles unsuccessfully with that tension between basic humanity and cosmic laserblasts. Yes, this is an episode in an ongoing serialized drama, a fact that was highlighted in the mid-credits tag scene from last summer’s Avengers: Infinity War, and of course teased in this movie before the lights come up. It’s just not clear that this time, Marvel picked the right filmmakers to combine that fact with the expected spectacle.