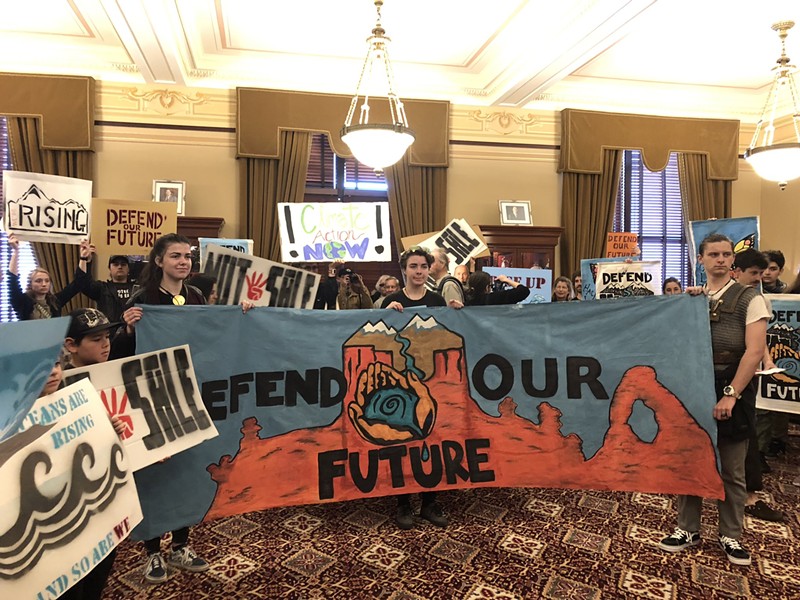 Several dozen young people interrupted the quiet, reverential decorum of the governor’s office Monday afternoon. They held signs imploring Gov. Gary Herbert to “defend our future” as they sat in protest on the checkered carpet, singing and chanting in between the addresses of several speakers.


“Climate change impacts every single one of us, every single day,” Rachel Love, a student at Ogden’s Da Vinci Academy of Science and the Arts, told her peers. “We should not have to stand here and beg for our future to be taken seriously.”


The crowd ventured to Herbert’s office to express their disdain for a Bureau of Land Management gas and oil lease sale taking place Monday and Tuesday. BLM will auction off 217,576 acres of public land in southeastern Utah to the oil and gas industry, much to the chagrin of many environmental groups and Native American tribes who say the space has cultural and archaeological value. The sale includes parcels near Bears Ears, Hovenweep and Canyons of the Ancients national monuments.


Building off the recent youth climate strike, most of the demonstrators were young Utahns concerned that climate change will affect their adult lives. “Even though the Utah state government signed a resolution to acknowledge climate change during the last legislative session, they haven’t been considering climate change, and they haven’t been considering the impact of these lease sales on our futures,” Eliza Van Dyk, a 20-year-old student at Westminster College, told City Weekly on the Capitol’s southern steps before leading a march into the building.


About 50 people submitted a letter to Herbert’s office asking him to request the deferral of all parcels in the auction. “We are scared for our future. According to the Intergovernmental Panel on Climate Change, society has less than 12 years to shift away from fossil fuels to prevent catastrophe,” the letter reads. “Rather than continue with business as usual, we need you to defend our future. Utah has the youngest population in the nation. We young people will inherit a fundamentally altered, destabilized world. Our health and well-being are at stake.” 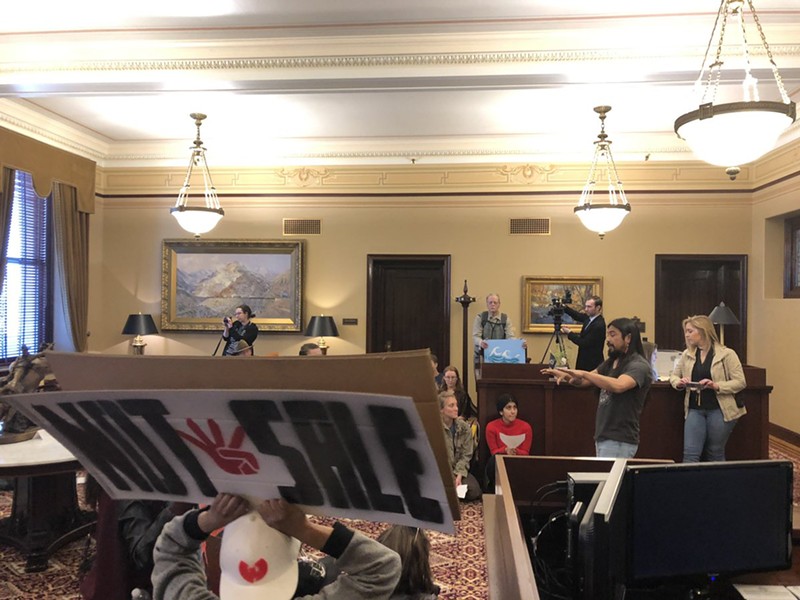 Some of the activists hand-delivered the same message to the guv’s office last week. Van Dyk said Michael Mower, Herbert’s deputy chief of staff, told them the state might be able to defer the sale of specific parcels, but it’s unlikely they’ll try to preserve all of them. “That just wasn’t what we were asking for,” Van Dyk said. “We really are just asking that no land be leased.”


When Van Dyk and the others returned to the Capitol on Monday, they had added the signatures of more than 1,500 people “from across Utah, and beyond.”


About an hour into the sit-in, Mower came out to talk with Van Dyk and Mishka Banuri, a senior at West High and another event organizer. “I’ll pass it along. I don’t know if the answer’s going to change. Probably not,” Mower told them, referring to the compromise he floated last week.


“We came here because we’d like a response,” Van Dyk said. “More specifically, we’d like to ask you, what are you going to do to defend our future?”


The conversation turned contentious when Carl Moore, the founder of Peaceful Advocates for Native Dialogue and Organizing Support, reminded Mower that the land was not the government’s to sell. “I just want to lend a voice, or a different perspective, because I’m indigenous,” Moore said, explaining he thinks the governor is being arrogant by trying to pick and choose which parcels to defer the sale of. “He’s playing with somebody else’s land,” Moore said.


“I disagree,” Moore said. “The indigenous voice has more credibility over anybody here’s voice unless they’re indigenous. That’s a moral fact.”


Moore then reminded Mower that no Ute people signed the state Constitution. “That Constitution is invalid. It’s an immoral document,” Moore said, his voice rising. “How would you like it if I went to your country or your house and I said, ‘Hey, I’m going to impose myself and my government on you, and take over by force?’ It doesn’t matter how many generations go by.”


The 10-minute impromptu meeting ended shortly after the exchange. Moore asked Mower to relay what he said to Herbert. “His credibility is waning,” Moore told Mower before he walked away.


“I will share this message,” Mower said. “And we appreciate your voice.”