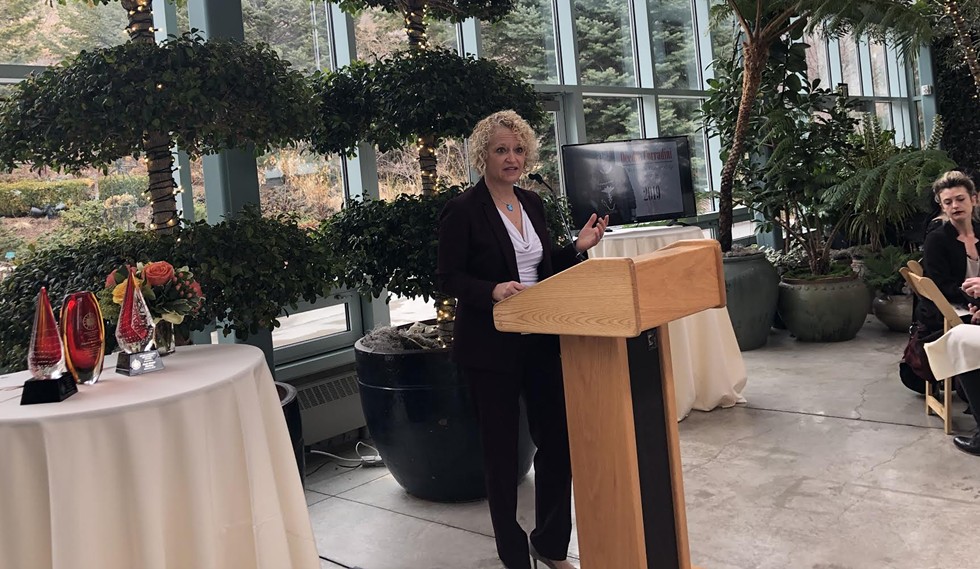 Salt Lake City Mayor Jackie Biskupski told a small lunchtime crowd gathered at Red Butte Garden Thursday afternoon that she had thought carefully about what she would say to honor the first woman mayor of Utah’s capital city, Deedee Corradini. A few days earlier, Biskupski had announced she would not be running for re-election and would instead prioritize supporting her family and working full-steam ahead on the remainder of her term. In preparing her remarks, Biskupski had remembered advice she’d given other women who’d asked her for guidance in the past.


“I also know that the choice I made this week was exactly that: a choice. A choice that suffragettes and women trailblazers like Deedee battled for us to get to make,” Biskupski said. “As women, our responsibility is to pursue. Not to have it all, but instead, to share all that we have to offer this world.”


The mayor delivered the address before presenting local women with the Deedee Corradini Women’s Leadership Awards. Biskupski created the annual ceremony in 2018 to honor Corradini, who served from 1992 to 2000 and played a key role in bringing the 2002 Winter Olympics to Salt Lake City and advocating for TRAX expansion to connect neighborhoods to the downtown area. She died in 2015 at age 70.


More than 25 years after Corradini took office, just one in four of the seats in the Utah House and Senate are occupied by women, Biskupski noted. Of the 243 mayors scattered throughout the state, only 33 are women. “We have a long way to go, my sisters. A very long way to go,” Biskupski said. “And I hope that moving forward, you see the value in supporting one another and reaching back to grab that hand of the next female behind you and lift her up instead of standing on her fingers.”


Among those given awards were Casey Chase, Ashlee Espinoza and Remy Fowles from the Utah Venue Market, which promotes women’s upward mobility. The women received the Opportunity Builder Award for their tireless work to promote transparency, teamwork and equity. “Women supporting women is everything,” Chase, a co-founder and member of the all-women staff, said when she accepted the trophy. “That’s how we got here, [and] that’s what we will continue to do in providing a physical space for people to feel safe and comfortable to pursue their endeavors.”


Victoria Petro-Eschler was honored with an Emerging Leader Award. The executive director of the Salty Cricket Composers Collective, which offers orchestra after-school lessons to students attending Title I schools and supports new composers in Utah, Petro-Eschler gave a powerful speech about the inspiring role music can play in young people’s lives. “Music saved me. I was the kid that no one knew needed to be saved,” she said. “It let me know that I didn’t have to be perfect. It gave me a place to be safe … the power of arts, the power of the humanities are available to this next generation, in an unrestricted way.”


The last person to receive an award was Carolyn Tanner Irish, the fourth woman ever ordained as a bishop in the Episcopal Church. Honored with the Community Leadership Award, Irish recalled Corradini giving her a list of “virtuous, generous” assignments shortly after she’d been ordained. “I will do my best to keep on,” Irish pledged, glancing at her table of supporters. “I don’t know I’ve still got the list of things that Deedee thought I should be doing, but I see the Tanner flock right there, and I cherish that and enjoy it every single day.”


Before her remarks, Biskupski reflected on the impact she’d hoped to have when she started the awards ceremony last year. “Women just don’t believe, still today, that they can do and be whoever they want to be, and do their part in the world that we live in. And that just breaks my heart,” Biskupski told City Weekly. “An event like this had to happen so that we can show other young, emerging leaders, so we can show other women in this community, what women really are doing here that’s making history.”