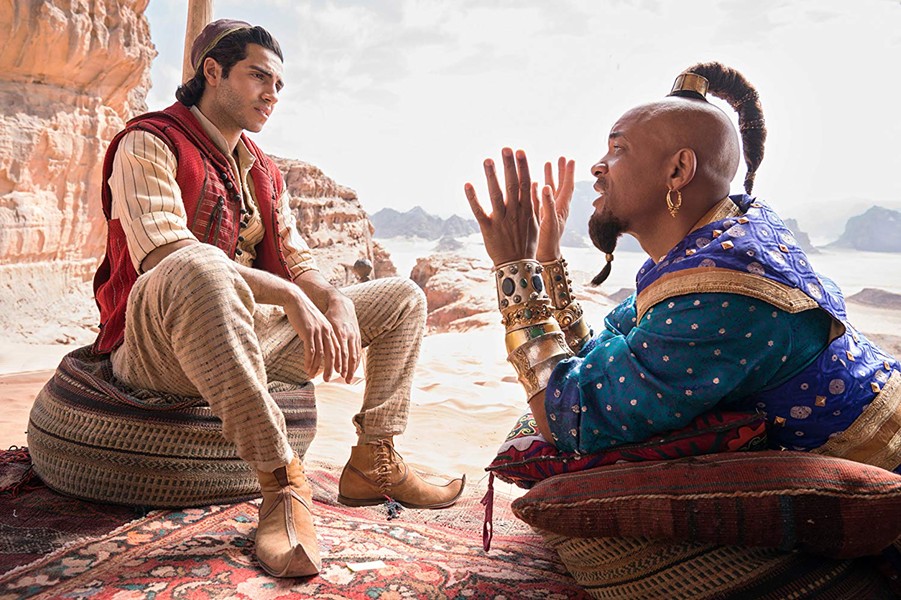 Aladdin *1/2
Disney’s current chore of mounting l ive-action remakes of all of its animated films continues to prove mostly an exercise in pointlessness and frustration with this second of its redos of the 1990s Disney Renaissance musicals. This new Aladdin lacks the charm of the original animated version, and—worse than 2017’s Beauty and the Beast—it cannot even seem to decide if it’s a musical or not, with characters awkwardly breaking into stilted snippets of song at random intervals in a way seemingly designed to ensure that there’s no melodic flow, no tripping the light fantastic. The shoehorned-in new song, de rigueur if one hopes for an Oscar nomination, is an embarrassing sub-par go-girl ballad for Princess Jasmine. The story is lifted intact from the 1992 movie, with the street urchin Aladdin (Mena Massoud) wooing Jasmine (Naomi Scott), daughter of the sultan of the city-state of Agrabah, with the help of a Genie (CGI’d Will Smith). The leads have no chemistry, and the villain—Marwan Kenzari’s Jafar, vizier to the sultan—lacks all bite. It’s just watered-down pastiche, on ice, set at Epcot. Opens May 24 at theaters valleywide. (PG)—MaryAnn Johanson

The Biggest Little Farm **1/2
John and Molly Chester give up city jobs and buy a dilapidated farm with the goal of a) keeping a promise to their dog, and b) making a farm that’s completely natural—no big corporate agriculture here. Fascinating idea, right? Plus, director John (a veteran TV director before buying the farm with his wife Molly, a food blogger) knows a good image, and aptly shows the perils and rewards of building from nothing a farm that is one with the world surrounding it. There’s also a compelling pro-eco-farming message. However, John the producer should have fired John the voiceover artist, because as a narrator, he comes off as sanctimonious and officious, and I’m betting that’s not the intention. Plus, as good as some of the footage looks, John the director makes John the character occasionally look like a jerk to his employees and volunteers. The film works best during its first half-hour, as the Chesters learn farming the hard way and their hippie agricultural expert Alan York has a bunch of screen time. It’s a worthwhile and important story, but there’s too much vanity and not enough agitprop. Opens May 24 at Broadway Centre Cinemas. (PG)—David Riedel

As horror premises go, "What if Superman were a sociopath?" is among the best I've heard lately. This scruffy, nasty, low-budget effort—produced by Guardians of the Galaxy director James Gunn and written by his brothers Brian and Mark—executes it fairly well, feeding on parental fears about the unpredictability of child-rearing but leaving some potentially fruitful layers of horror untouched. In 2006, Kansas farm couple Kyle (David Denman) and Tori (Elizabeth Banks) adopted an alien baby whose space capsule landed near their home, hiding the vessel under a trapdoor in the barn; now, at the onset of puberty, young Brandon (Jackson A. Dunn) starts to show his superpowers and his true nature. Directed by Gunn family pal David Yarovesky, the film is deliberately gory in a few places, low-grade suspenseful throughout, with committed performances by the three principals; Dunn's ice-cold Brandon is especially impressive. It does the trick, but there's so much more they could have done with this scenario, and the whole thing feels like it's setting up a more disturbing sequel—a sequel I will definitely watch. Opens May 24 at theaters valleywide. (R)—Eric D. Snider

Photograph ***
Tell me this doesn’t sound like a familiar set-up for a farce: Mumbai tourist photographer Rafi (Nawazuddin Siddiqui), in order to placate the insistence of his grandmother (Farrukh Jaffar) that he should get married, persuades shy young accounting student Miloni (Sonya Malhotra) to pose as his fiancée. But writer/director Ritesh Batra takes a considerably more low-key approach to the time-worn “people who are faking being in love actually fall in love” premise (Can’t Buy Me Love, Green Card, To All the Boys I’ve Loved Before, etc.), resulting in a gently thoughtful character study. Batra doesn’t hammer on the cultural particularities of this variation—religious differences, familial expectations—instead allowing for an observation of how Rafi and Miloni’s feigned relationship allows them an oasis of genuineness from the frustrations of their daily lives; Miloni in particular gets to do some of the acting that is her real calling. The narrative is almost too restrained, and could certainly frustrate viewers expecting a conventional payoff to the long buildup. The simple pleasures come from suggesting that two people finding something real together isn’t just a laughing matter. Opens May 24 at Broadway Centre Cinemas. (PG-13)—Scott Renshaw

The White Crow **
In Paris ca. 1961, while on tour with the Kirov Ballet, Soviet dancer Rudolf Nureyev defected to the West. This elegant but dull endeavor—the third film from director Ralph Fiennes (he also appears briefly)—wants to be all about what led to this signal moment of the Cold War, except it’s not terribly enlightening. The film springs to passionate life in its last few minutes, in the tense defection sequence; the gripping jockeying of KGB agents and French police at Paris’s Le Bourget airport is worthy of a spy thriller. Mostly, though, the anemic script sees Nureyev (Oleg Ivenko) wandering prettily around Paris, eating at cafés, befriending the locals—primarily socialite Clara Saint (Adèle Exarchopoulos)—and generally being a generic arrogant jerk the likes of which we’re used to seeing male artists depicted as. If you don’t already know much about Nureyev, you’ll learn little here. There’s barely even any dancing, which is ... bizarre, given the film’s insistence that that’s all Nureyev is interested in, never mind his reputation as one of the greatest dancers ever. This is a film so subtle it’s downright diffuse. Opens May 24 at Broadway Centre Cinemas. (R)—MaryAnn Johanson