The Fall of the American Empire, Bethany Hamilton: Unstoppable

by Scott Renshaw and MaryAnn Johanson 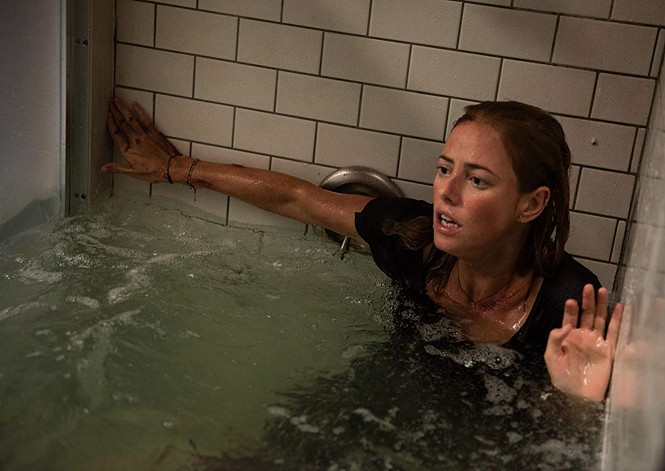 Bethany Hamilton: Unstoppable **1/2
More movies about sporty thrill-seeking girls and women, please: This new documentary about professional surfer Bethany Hamilton is very welcome. Aggressive, competitive and driven, Hamilton has been a powerful role model since bouncing back from the horrific injury she suffered as a serious-amateur teen, when, at 13, she lost her left arm to a tiger shark. Now, this Kickstarter-funded doc frames Hamilton’s journey against the backdrop of her recent preparations to surf a legendary Hawaiian “monster” wave. At least as rousing as Hamilton’s prior triumph over bodily adversity is the new physical trial she takes on: She surfs while heavily pregnant, and competes again mere months postpartum. (The film might have given a little more attention to Hamilton’s refusal to be tagged as “disabled;” the topic is only briefly raised, and seems to warrant deeper discussion.) Director Aaron Lieber is nowhere near as adventurous or risk-taking as his subject, however; there’s a sleek slickness to Unstoppable that lends a sense more of the promotional than of honest portraiture. She is so clearly an inspiration that there’s no need for such a heavy hand on the “inspirational.” Opens July 12 at theaters valleywide. (PG-13)—MaryAnn Johanson

Crawl **
A solid “survive the monster” thriller only has a few basic requirements in order to be satisfying, and this one rarely manages to nail any of them. It starts with a great premise: Florida college swim-team star Haley (Kaya Scodelario) and her injured father (Barry Pepper) are trapped in the family home’s crawl space during a hurricane, threatened both by rising waters and deadly alligators. The character angle—involving tensions between Haley and her dad over driving her to perfectionism—gets in the way as often as it raises the stakes, though Scodelario is fine in her competitive tenacity. The frustrations come from director Alexandre Aja’s failure to provide clear, efficient definition of the threat—how many gators are there, where are they relative to our protagonists at any given time—or enough creative ways in which the humans out-think their animal opponents. You’ll get some crunching gore whenever the reptiles find a human to nosh on, and an occasionally effective moment of amped-up tension. But it shouldn’t be so hard to make a lively creature-feature out of a Category 5 gator-cane. Opens July 12 at theaters valleywide. (R)—Scott Renshaw

The Fall of the American Empire **1/2
This isn’t the first time a filmmaker has used a heist thriller as a vehicle for commentary on economic disparity, but Denys Arcand pokes at societal ills in a weird mix of genres overflowing with finger-wagging. The setting here is actually Montreal, where over-educated/under-employed courier Pierre-Paul (Alexandre Landry) winds up in possession of millions in cash after a botched robbery at an organized crime safehouse. A police investigation and a ruthless effort by the crime boss to find his money land this in genre territory, but there’s also an almost farcical component as Pierre-Paul turns to a recently-paroled gangster (Rémy Girard) to help him manage his money, plus a romance between Pierre-Paul and a high-priced, heart-of-gold escort (Maripier Morin). Arcand finds some solid material in Pierre-Paul’s conflicting desires to help himself and help others, while Girard makes for an appealing tough-guy foil. It just keeps feeling like Arcand is pausing to lecture us about homelessness, about the thin line between “legitimate business” and crime, about the wealthy getting away with anything. It’s a morality tale that’s pretty darned pleased with its own morality. Opens July 12 at Broadway Centre Cinemas .(R)—SR

Stockholm **1/2
Did you ever wonder how “Stockholm syndrome” got its name? Well, you won’t exactly find it here, in a story inspired by the 1973 siege at a Swedish bank but which takes a strangely conventional detour. In this telling, an American named Lars (Ethan Hawke) takes hostages at the bank not to rob it, but to secure the release of his imprisoned friend Gunnar (Mark Strong), while the hostages—including bank employee Bianca (Noomi Rapace)—gradually begin to trust their captors. Writer/director Robert Budreau finds a unique angle on why that connection emerged, focusing both on Lars as a kind of gentleman robber with a romantic notion of a criminal life, and on the local police chief (a terrifically cocky Christopher Heyerdahl) repeatedly overplaying his hand. But instead of a tale of group psychology, this becomes a romance between Lars and Bianca, which doesn’t explain the state of mind of the other two hostages, or allow for the crucial real-life detail about everyone’s refusal to testify against their captors. The fascinating performances help elevate the disappointing reduction of a complex emotional response to “and then they fell in love.” Opens July 12 at Megaplex Jordan Commons. (R)—SR

Wild Rose ***
When the broad strokes of a narrative are familiar, it’s all about the way it executes finer details—and often about the performance at the center of that narrative. Director Tom Harper and screenwriter Nicole Taylor offer the story of Rose-Lynn Harlin (Jessie Buckley), a 24-year-old Glasgow woman just out of a 12-month prison stint and trying to pick up her life. But for Rose-Lynn, that’s mostly about trying to follow her dream of being a country singer, rather than looking after her two children, which she mostly leaves to her mother (Julie Walters). There’s more of a meander than a straight line to the plot—Rose-Lynn gets a job as a housecleaner for a wealthy woman (Sophie Okonedo); she visits London to meet an influential BBC radio personality; she takes a trip to Nashville—though Harper captures it all with a Ken Loach-ian authenticity. The real power comes from Buckley’s performance, evoking Rose-Lynn’s emotional volatility that only seems to find peace when she’s singing. With Walters offering great supporting work as a mother wrestling with how much support becomes enabling, Wild Rose gives a pursuit-of-fame story its own distinctive voice. Opens July 12 at Broadway Centre Cinemas. (R)—SR