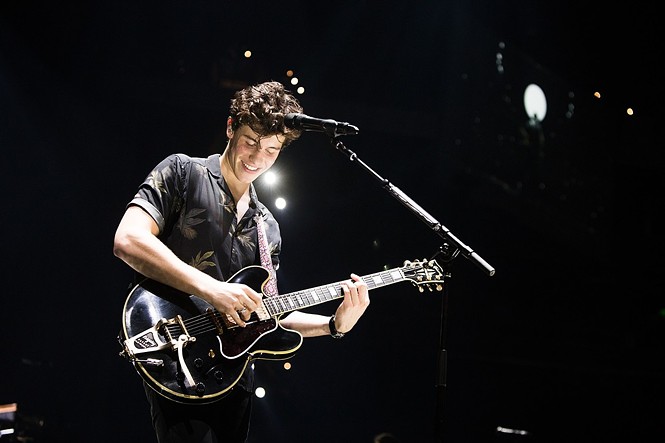 TUESDAY 7/16
Shawn Mendes, Alessia Cara
With Ariana Grande having left rumbling thrills in the valley after her stop here on her tour, we can now look forward to Shawn Mendes as an aftershock, a solo pop artists whose rise to fame has raced alongside Grande’s own and whose music features the same kind of passionate romantic themes that rock pop music today. Wooing fans with well-known (or oft-played) songs like “If I Can’t Have You” and “There’s No Holding Me Back” exploring the bombastic nature of uncontrollable desire with his Jonas Brothers-esque vocals, Mendes came into 2018 with a self-titled album that took a gentler turn. The tense, almost anxiety-fueled track “In My Blood” is the most popular track off the album, and reveals a more introspective side of Mendes, a side that isn’t aching for a beautiful heroine to pick him up. The album cover—which is covered in roses that split Mendes’ face into a rosy mirror image—has graced the chests of young people all over the country, and I’m sure a few will be visible at his SLC stop July 16 at the Vivint Smart Home Arena. He’ll be joined by opener by the Alessia Cara, whose unabashedly gutsy, soulful vocals grace 2015 hits like “Here,” and whose newer brand of waltzy pop will surely fit neatly into the evening. (Erin Moore) Vivint Smart Home Arena, 7:30 p.m., $66–$86, all ages, vivintarena.com It’s a rare and special thing to see an artist who works somewhat in the undertow of their music world. Hayes Carll is one of these artists, a critically-lauded artist whose designation as a country and Americana artist doesn’t do much to pin him down. A songwriter who really focuses on storytelling overall, his music has garnered attention from every music publication you can think of, with NPR listing his 2019 album What It Is as one of their Best Albums of 2019 So Far. His music rips, rises and falls with such vigor that it feels that Carll is really just going along with it all, rolling with the punches. Rock-oriented enough at times to even appeal to Paul Westerburg lovers (2008’s “Bad Liver And A Broken Heart”), Carll walks all over genre on his way to sing about what he wants to sing about—in a style that suits his Texan roots. Salt Lake residents can take a break from the heat this week with a trip up the mountain to catch a performance from Carll at the Canyons Village Summer Concert Series. (Erin Moore) Canyons Village, Park City, 6 p.m., free, all ages, parkcitymountain.com 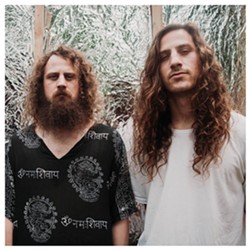 Hippie Sabotage, Xylø, Tishmal
The 2019 Twilight Concert series kicks of with the maniacally zen music of EDM duo Hippie Sabotage, a choice that will hopefully dispel any bad vibes remaining from the festival’s late ups and downs. Hippie Sabotage is composed of two brothers, Kevin and Jeff Saurer, who have been making music together since childhood, but got serious about in 2010. Anyone familiar with the duo knows their brash attitude and the personas they present to the world, especially when it comes to their energetic and pulse-racing live shows. Oftentimes they will want crowd involvement, which could be anything from encouraging mosh pits, to one of the duo going out in the crowd while performing a song. Their music is hypnotic, in that it can lull any listener into a state where all they can focus on is the engineered sound and the duo’s charismatic baritone vocals. Their latest singles, “Find Me” and “Trust Nobody,” continue this trend. Both songs have dark themes in addition to the usual high energy EDM sound the duo relies on.​ Fellow electronic artists Xylø and Tishmal open. (Sean Hemmersmeier) Gallivan Center, 239 S. Main St, Saturday, July 20, 6 p.m. $10-50, 24tix.com