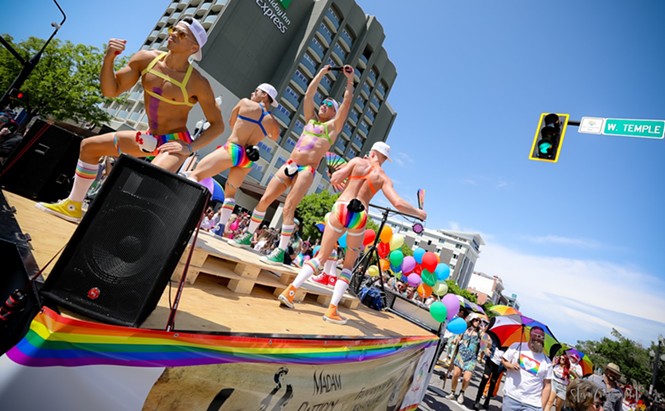 With the ambitious goal of a nearly emissions-free Pride Parade next year, the Utah Pride Center is clamping down on gasoline-powered vehicles, Liz Pitts, the center’s community engagement director, says.


“We don’t anticipate we’ll be able to hit the exact zero-emissions goal next year, but we are going to get as close to it as we possibly can,” Pitts tells City Weekly. “We are asking people to be creative and do things other than, simply, ‘Eh, let’s get our truck and decorate it.’ There’s a lot more that can be done.”


Pitts says there’ll be an exception for vehicles used specifically to transport disabled people, and adds that as the 2020 cavalcade nears, planners might consider other exceptions—like hybrid cars and vans—adding that their goal isn’t to have “zero [gasoline] vehicles whatsoever.”


She notes some float-makers create “people-powered” floats where participants pedal drive chains. “There’s so much fun stuff we can do and not pollute the Earth,” Pitts says.

But will the efforts push out non-corporate participants who might not have the funds for a clean-energy float? Pitts says the center spoke with every parade participant this year regarding the initiative, and found broad support and excitement.


“Getting a vehicle into the parade is an expensive endeavor in and of itself,” Pitts says. “So smaller organizations and smaller businesses have tended to have walking groups or other kinds of entries … I don’t think [the new rules] will exclude people who want to be in the parade.”


Of this year’s 174 entries, around 100 had some sort of float. (Each entry is limited to a maximum of three floats.)


Although Pitts says she’s unsure if there are other pride parades with a similar zero-emissions goal, Utah’s iteration is “ahead of the curve” on sustainability and green initiatives, based on her attendance at the InterPride conference, a meeting where hundreds of Pride organizations from around the world share ideas.


The initiative to reduce emissions was spurred by concerns over air-quality in the Salt Lake Valley, the city government’s green initiatives and center’s broader goal to increase sustainability throughout Pride weekend. The festival provides recycling and compost bins and was the first event on Washington Square to provide free, filtered running water to encourage attendees to bring reusable water bottles, according to Pitts.