Movie Reviews: Once Upon a Time ... in Hollywood, The Farewell, Sword of Trust | Buzz Blog

Movie Reviews: Once Upon a Time ... in Hollywood, The Farewell, Sword of Trust 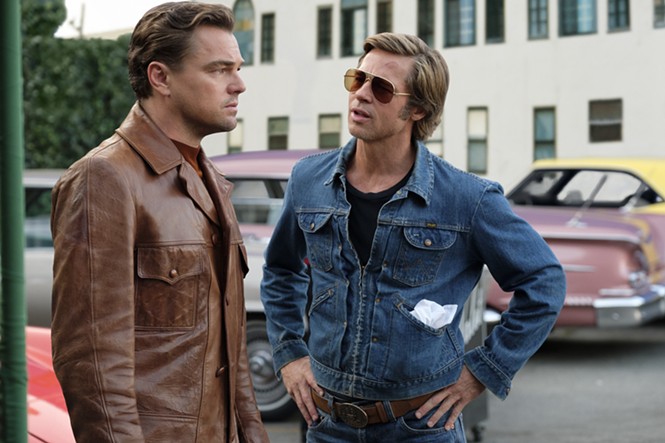 The Farewell ***
Writer/director Lulu Wang’s semi-autobiographical story may ultimately be more emotionally satisfying than it is insightful, but she certainly pours freely from the fountain of emotional satisfaction. Awkwafina plays Billi, a Chinese-American would-be writer in New York who’s caught up in a grand familial lie: Her grandmother Nai Nai (Zhao Shuzhen) has been given a terminal cancer diagnosis, but rather than tell her about it, the family keeps it secret from her, and organizes a pseudo-fake wedding for Billi's cousin in China as an excuse to gather family. The star isn’t given too many notes to play, as Billi generally wrestles silently with a plan she disagrees with. Her best moment comes as Billi expresses her confusion over feeling alienated from the country of her birth—just one of the many conversations about East/West cultural divides that Wang handles with restraint. Mostly, however, it’s a portrait of a loving family doing the best they can for those they love, seasoned liberally with engaging punch lines and Wang showing off her directing skills best in the climactic wedding. No manufactured conflict is needed when the simple stuff of being in a family together is enough. Opens July 26 at theaters valleywide. (PG)—Scott Renshaw

The Fighting Preacher **1/2
The formula for LDS-themed cinema remains consistently similar to that of other Christian-themed cinema: Promote the faith first, and if you tell a good story along the way, that’s kind of incidental. There’s a solid fact-based story at the core here, as ex-boxer Willard Bean (David Shawn McConnell) and his new wife Rebecca (Cassidy Hubert) are called by the LDS church circa 1915 to take up residence in the recently-acquired Joseph Smith farm in Palmyra, New York—where local antagonism towards Mormons remains high. In theory, the narrative arc involves Willard learning to set aside his pugilistic predilections to learn a catch-more-flies-with-honey approach, but writer/director T.C. Christensen doesn’t provide Willard with enough of a clearly-defined personality to make his personal growth a real focus. There’s stronger material surrounding Rebecca—thanks to Hubert’s winning performance—and the difficulties of their oldest daughter (Scarlett Hazen) making friends, providing some genuine emotion in their sense of isolation. Christensen mounts a gorgeous production, but would have found a stronger foundation in a story that wrestled more honestly with the complexity of why communities can hate—and then maybe love—the “other.” Opens July 24 at theaters valleywide. (PG)—SR

Once Upon a Time … in Hollywood ****
How would people respond to this fascinating, rollicking, melancholy work if they were able to watch without knowing it was a Quentin Tarantino film? The sprawling narrative might be enough to tip folks off, as QT enters the world of 1969 Hollywood to tell the tale of fading TV star Rick Dalton (Leonardo DiCaprio), his longtime stunt double/personal assistant Cliff Booth (Brad Pitt), and Rick’s new next-door neighbor, a rising starlet named Sharon Tate (Margot Robbie). The looming spectre of the Manson Family murders hangs over the narrative—particularly when we see Tate gleefully watching audience response to her performance in The Wrecking Crew—but not enough to blunt the comedic force of the performances by DiCaprio and a never-better Pitt. But this winds up feeling like far more than a nodding recognition that all things must pass, or a simple valentine to the days of celluloid and studio back lots. It’s Tarantino’s biggest, most complicated statement yet on his love of filmed stories. Yeah, people can interpret them in dangerous ways, and yeah the business can crush souls. It’s also miraculous when everything comes together, and when you can somehow imagine worlds much better than this one. Opens July 26 at theaters valleywide. (R)—SR

Shadow ***1/2
Zhang Yimou returns to the wuxia-influenced historical action of his classics Hero and House of Flying Daggers, but does so with a visual style that makes it an utterly distinct creation. Set during the Chinese “Three Kingdoms” era, it follows the court intrigue surrounding King Pei (Zhang Kai), whose military Commander (Chao Deng) has instigated a potential war with a neighboring kingdom over a disputed territory. Pei also doesn’t know that the man he believes is the Commander is actually a double—a commoner named Jing—playing the Commander’s role while he recovers from injuries. There’s even more to the plotting and planning than that Prince and the Pauper angle, and Zhang takes his time setting up the characters and the political stakes. But he does so while leaning into a fascinating palette of blacks and greys that evoke classical ink paintings, rather than the bursts of color that characterized Daggers. And while the action ultimately does kick in—including a stunning sequence involving spinning umbrellas made of sharpened blades—Shadow delivers a rich narrative full of challenged gender roles, double-crosses, brutish exercise of power and world where nothing is as black-and-white as the chromatic scheme would suggest. Opens July 26 at Tower Theatre. (R)—SR

Sword of Trust ***1/2
Writer/director Lynn Shelton has yet to find a mix of performance and subject matter as potent as her 2009 breakthrough Humpday, but when she gets the kind of masterful work she evokes here from Marc Maron, it almost doesn’t matter. Maron plays Mel, the owner of an Alabama pawn shop where a pair of patrons (Jillian Bell and Michaela Watkins) bring in an inherited sword that is believed by Southern conspiracy theorists to prove that the Confederacy won the Civil War. Shelton and co-writer Mike O’Brien flit around the edges of what happens when online crackpots coalesce into communities, though that material always feels tangential to the character beats. And while the supporting cast all gets to do funny work, Maron—who worked with Shelton on his IFC series and his 2017 Netflix stand-up special—continues to evolve into an actor of multiple shades while playing a guy who would like to rewrite some of his own history. There’s a lot of hilarious riffing going on, and while the plot might only provide a loose armature, Maron gives it all a soulful center. Opens July 26 at Broadway Centre Cinemas. (R)—SR