Church service commemorates the anniversary of the Hiroshima and Nagasaki bombings. 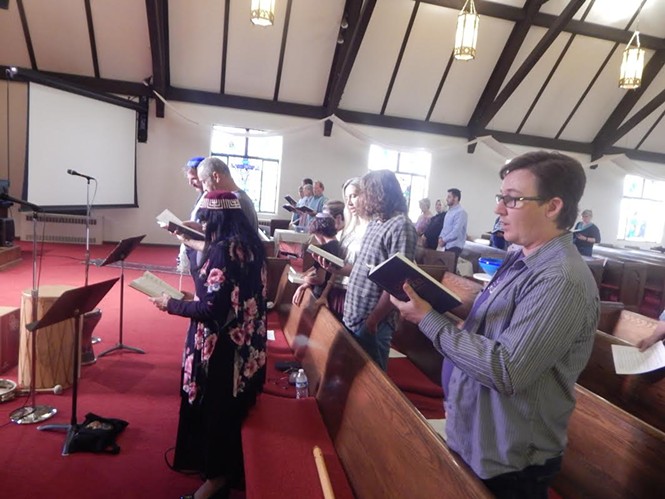 
The churchgoers—including little kids and retirees, veteran activists, musicians and speakers of multiple faiths—gathered Tuesday night at the Wasatch Presbyterian Church to commemorate the 74th anniversary of the United States dropping atomic bombs on Hiroshima and Nagasaki. Two B-29 bombers detonated their catastrophic payloads over the two Japanese cities on Aug. 6 and 9, 1945, killing between 129,000 and 226,000 total people and permanently unleashing the threat of nuclear annihilation onto the world.


World War II is often remembered as a “just” war, but it’s also the one in which America deployed the most destructive weapon imaginable on thousands of innocent civilians. Nine countries now possess nuclear warheads—including the U.S. and Russia as well as Israel, India and Pakistan. Their flags were displayed in the lobby of the church Tuesday. Jars in front of them contained sunflower seeds, corresponding to the number of warheads in each country’s possession.


As President Donald Trump makes nice with nuclear-armed North Korea and provokes Iran, an endless string of mass shootings make the threat of random violence and destruction feel all the more real in the United States—two shootings happened on the same day over the weekend in El Paso and Dayton, Ohio, just a week after another in Gilroy, Calif.


The church service offered a humble sanctuary from this time of crisis.


“We want to welcome you for the light that you are in this world, as we continue to grapple with division and war and pain,” Andrew Fleishman, the church’s pastoral associate, told the audience in his opening remarks. “You stand out as a beacon of peace and hope and it gives us thanksgiving and gratitude.”


During the hourlong service, speakers from Christian, Jewish and Muslim faiths expressed the need for peace and harmony. Visitors sang hymns like “For Everyone Born” and “We Shall Overcome.” Three musicians led an interfaith jam, performing chants in Hebrew, English and Arabic over pulsing hand percussion and hummingbird-like melodies on a wooden flute.


A screening of The Atomic Soldiers, a 23-minute documentary, underscored the frightening reality of a nuclear blast. In it, military veterans described being exposed to radiation during U.S. nuclear tests conducted from 1946 to 1992, and the difficulties they faced as they were sworn to secrecy by their government, which refused to acknowledge the tests’ cancerous side-effects.


“You see this molten cloud changing color as it turns within itself,” one of them said in the video, describing the sight of a nuclear blast. Another veteran recalled seeing sheets of flesh falling off soldiers who had gotten too close to the bomb.


The event was organized by the Utah Campaign to Abolish Nuclear Weapons. Founder Deb Sawyer told City Weekly that she’s hosted this service every year since the group started in 2007, keeping up a years-long tradition practiced by Utah activists to commemorate the bombings.


“We want people to reflect on the danger of the weapons that we have, and to strengthen their commitment to abolishing them,” she said. “There were myths about nuclear weapons, and one of the things we want to counter is some of those myths. One of the myths is that we need them—we don’t. One of the myths is that they ended World War II, and I don’t think they did. World War II was about to end anyway; Japan was about to surrender.”


Seventy-four years after the bombings, Alan Bachman, a rabbinical student who led the interfaith chant and jam session, emphasized just how important it is for everyone to finally unite to create a better world.


“We’re not going to be able to heal this world with just one faith or belief system alone,” he said. “We’re all going to have to come together and start sharing our gems and our wisdom.”