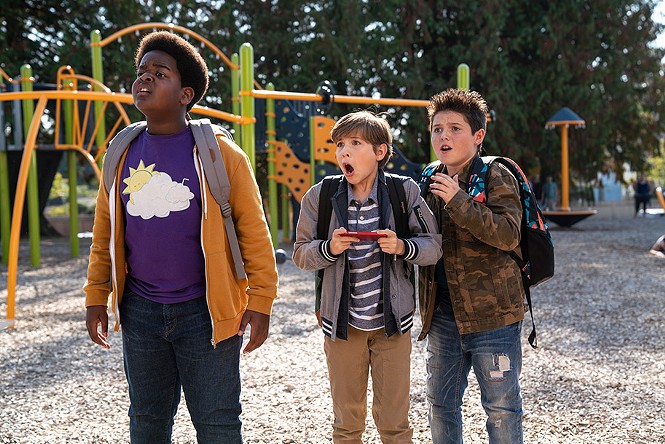 47 Meters Down: Uncaged
[not yet reviewed]
Young divers face a man-eating threat in an underwater cave system. Opens Aug. 16 at theaters valleywide. (PG-13)

The Angry Birds Movie 2 *
Why an Angry Birds 2? Because the first one made some money, and there’s built-in name recognition thanks to the popular mobile game. That’s it. That’s the only reason. This time out, the Birds That Don’t Fly (except by catapult[?]) join forces with the enemy green pigs from another remote island—seriously, don’t ask—to repel an assault by the eagles of yet another island none of them knew about before. This assault is led by Zeta (voice of Leslie Jones), for no apparent reason other than a jilted romance that left her angry and bitter. Just like a woman! Angry bird Red (Jason Sudeikis) will lead the attack, the entire purpose of which is, apparently, to prove that he should have, in fact, left all leadership duties to smart, capable Silver (Rachel Bloom). But never fear! Male-coded animated characters remain resolutely at the center of this faux-woke narrative, which wants to have its male protagonist and its nods to feminism at the same time. Speedy bird Chuck (Josh Gad), even gets to police his sister Silver’s romantic access to Red. Hoo-freakin’-ray. Opens Aug. 16 at theaters valleywide. (PG)—MaryAnn Johanson

Good Boys ***
A decade-plus on from the distasteful celebration of toxic male teenhood that was Superbad, here we are at a Seth Rogen–driven movie (he’s a producer) that can only be deemed as, well, supergood; it’s an unexpectedly sweet, surprisingly edge-of-innocence celebration of modern ascendant malehood. (Rogen’s recent wokeness seems genuine. Folks can learn!) Three sixth-grader boys (Jacob Tremblay, Keith L. Williams and Brady Noon) spend a day ditching school to vie against older teen girls (Midori Francis and Molly Gordon)—whom, thankfully, they are not middle-school-romantically interested in—in a complicated plot involving drones, the mildest sort of party drugs and making their way toward a grade-school “kissing party.” Mostly it’s about worrying that, at the tender age of 11, one might become a “social piranha,” about securing consent to engage in any kind of physical contact with another kid, and about ensuring that nothing one is doing constitutes bullying. These kids today, with their concrete physical and psychological boundaries! “We’re not kids, we’re tweens!” they declare, staking a claim on a developmental boundary that we adults never even realized existed. Opens Aug. 16 at theaters valleywide. (R)—MAJ

Honeyland ***1/2
Hatidze is the only female beekeeper in Europe (specifically, Macedonia), and honey supply outstrips demand. Plus, she looks after her partially blind and ailing mother. The abandoned town they live in has zero everyday comforts—no electricity, no running water—so when itinerant Hussein, his wife and their Mia Farrow-sized brood of children arrive, Hatidze is keen to welcome them and give them the inside dope on survival. Hussein, unfortunately, is something of a bastard: After Hatidze shows him how to keep bees and harvest honey, he does everything in his power to screw her out of her living. Of course, things aren’t so simple; the word “destitute” falls well short in describing Hatidze’s and Hussein’s living situations, so perhaps it’s unfair to call him a bastard because he has to provide for his family (though they all clearly hate him). Directors Ljubomir Stefanov and Tamara Kotevska make him sympathetic even as you want to strangle him—or at least be stung repeatedly. But this is Hatidze’s story, a fascinating document of a tough, resilient woman. Her ultimate reaction to Hussein’s underhanded behavior is priceless, just like Honeyland. Opens Aug. 16 at Broadway Centre Cinemas. (NR)—David Riedel

Mike Wallace Is Here ***1/2
Avi Belkin’s documentary about the legendary TV newsman takes an approach that easily could have come off as forced, but instead makes for a terrifically entertaining profile. His choice is to frame the narrative almost entirely through interviews—not just Wallace’s own infamous probing interrogations of political figures and celebrities, but occasions when Wallace himself (who died in 2012) was in the hot seat, fielding questions from his 60 Minutes colleagues, Barbara Walters, his own son Chris and others. The result is revealing, as we often see Wallace dodging the same tough queries he’d put to his own interview subjects, which makes it even more surprising when he does let his guard down about personal struggles, like his failures as a parent or his experience with depression. Mostly, it’s a revealing look at a man always trying to prove himself as a legit journalist after an early career doing commercials, and whose legacy is a complex mix of hard-hitting investigation and turning journalism into dramatic theater. If he remains a bit enigmatic, it’s only because he never stopped being better at asking questions than answering them. Opens Aug. 16 at Broadway Centre Cinemas. (NR)—Scott Renshaw

Ode to Joy **1/2
I’m not sure my first choice for adapting an NPR story about a rare neurological disorder would be turning it into a romantic comedy, but the result is at least moderately effective. Martin Freeman plays Charlie, a man whose condition, called cataplexy, renders short-circuits his brain and renders him unconscious when he feels strong emotions—including joy. As a result, he’s purposefully organized a bland, tame life for himself—which is complicated when he meets and falls for the effervescent Francesca (Morena Baccarin). An odd romantic square forms when Francesca instead begins dating Charlie’s brother Cooper (Jake Lacy), while Charlie hooks up with a more low-key woman (Melissa Rauch, by far the movie’s MVP), and there’s some solid material as director Jason Winer juxtaposes Charlie’s sedate dates with those of his rambunctious bro. It all just feels more built on the quirkiness of the condition rather than its profound impact, despite the best intention of the performances; if it’s supposed to seem tragic that Charlie needs to avoid babies and cute puppies, here it plays strictly as a punch line. Opens Aug. 9 at Megaplex Jordan Commons. (R)—SR

Where’d You Go, Bernadette **1/2
Richard Linklater’s adaptation of Maria Semple’s novel shifts perspective to make it more of a character study than a mystery, and the result is both awkward and a slight improvement. Cate Blanchett plays Bernadette Fox—once a rising star as an architect, now a generally anti-social mess adored by her daughter Bee (Emma Nelson) and a source of confusion to her husband (Billy Crudup). The story provides a gradually unfolding explanation behind Bernadette’s neuroses, offering depth to the character but also occasionally indulging Blanchett’s predilection for playing to the balcony seats. Eventually Bernadette vanishes to Antarctica—a plot development which actually opens the novel, and allows for a focus on Bee trying to understand her mother as a person. It comes as a bit of a shock in this much more chronological narrative when Bee says at one point in the movie of her mother “We live for each other;” while this version provides a solid story of what happens when a creative mind is left with no outlet, it certainly doesn’t center the mother-daughter dynamic in a way that allows for emotional closure. Opens Aug. 16 at theaters valleywide. (PG-13)—SR