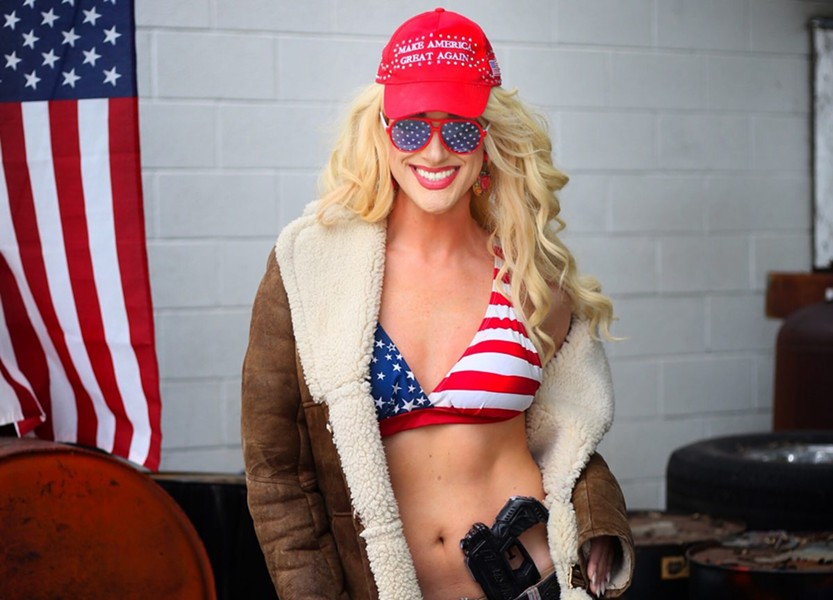 Salt Lake City’s tight-knit drag queen community has been reacting with horror over a performer unveiling a new persona in support of Donald Trump.


“I am a political drag queen,” Lady MAGA declared in an Instagram video. “I support President Trump, and I believe that together we can make America gay … I mean great again!”


City Weekly reached out to Lady MAGA for an interview. In an email, she wrote that she was reaching out to her publicist, but didn’t get back to us by end of the day Friday.


This grand unveiling has not gone over well with drag performers and other artists in Salt Lake’s LGBTQ hub, who consider Trump’s far-right politics to be the opposite of what the community stands for.


“When I saw it, I literally screamed,” Wil Wilson, aka Wiltavious—a black, queer musician and self-professed Queen of Salt Lake, who appeared on City Weekly’s cover for this year’s Pride Issue—says in a phone interview. “How can you support the very person who wants to allow the establishment to discriminate against you?”


It seems Lada MAGA is making a concerted effort to come out as a Trump-loving queen. In a blog post titled “Why Lady MAGA?,” the performer invokes Revolutionary War-era philosopher Thomas Paine as she argues that her persona is designed to upend both liberal and conservative stereotypes.


“I seek to prove that Conservatives and people who support President Trump are not bigots, homophobes, and racists. The leftist media portrays Conservatives as ignorant, hateful, and dangerous people. It simply isn’t true,” she writes, adding that she also hopes to change Trump supporters’ minds when it comes to LGBTQ people, which she says aren’t “aggressive, angry, and scary” as conservatives think.

“I hope to give Conservatives hope that even a Drag Queen can love America the way they do, and show them that not all Drag Queens are out to offend. And not all LGBT people are filled with anger and hatred!”


In another post, Lady MAGA goes on the attack against the LGBTQ community, calling it a “cult” and saying other drag queens are intolerant of her conservative values. She writes that she felt goaded into silence about her political beliefs when she saw a “FUCK TRUMP” poster in the dressing room of a recent Pride Month drag performance.


“I knew in that moment that if I were to share my political views, I would have been unwelcome,” Lady MAGA writes. “I realized that if I had arrived to get ready for the show wearing my MAGA hat, I would have been heckled and possibly asked to leave. Heck, I don’t even think I would have been invited to perform if the organizers knew that I support President Trump.”


“All of my Conservative and religious friends fully support my right to be a Gay Drag Queen,” she adds. “The idea that Conservatives hate gays is total and complete B.S.”

“How can you support the very person who wants to allow the establishment to discriminate against you?” —Wiltavious click to tweet

Woods has launched an official website and a Facebook page to promote Lady MAGA. According to a Facebook event page, the performer will host an LGBTQ conservatives forum on Friday, Sept. 6. One of the speakers listed for the event is Nathan Ivie, the Republican Utah County Commissioner who came out as gay earlier this year. Already, other performers have responded by scheduling a “Fuck Trump Anti-MAGA Rally” outside the Desert Star Playhouse in Murray, where the forum is scheduled.


(Ivie did not respond to emails and voicemails requesting comment; we’re also waiting on confirmation from the theater that this forum is actually happening.)


Aphro Deity, a prominent Salt Lake drag entertainer, says she doesn’t normally “cancel” people for frivolous reasons or off-putting politics. She says most of the drag queens in the city know each other well, and they’re generally understanding and friendly with each other. She’s open to performers who come into the community with an open mind.


But while she grants that Lady MAGA is “fucking brave” for coming out as a Trump supporter, she considers this a step too far. In a state dominated by religious conservatives, Deity stresses that it’s all the more important for drag performers to resist the Trump administration and his division-baiting politics.


“It has become super important for us, as not only a community but as representatives of the community, to work extra-hard and be extra-diligent to make sure it doesn’t infect our thing,” Aphro Deity says. “We’re so susceptible to it, because the rest of Utah is so susceptible to it.


“Instead of having to court controversy, you could just be good at what you do,” she finalizes.