Movie Reviews: The Lighthouse, Dolemite Is My Name, Black and Blue, Countdown 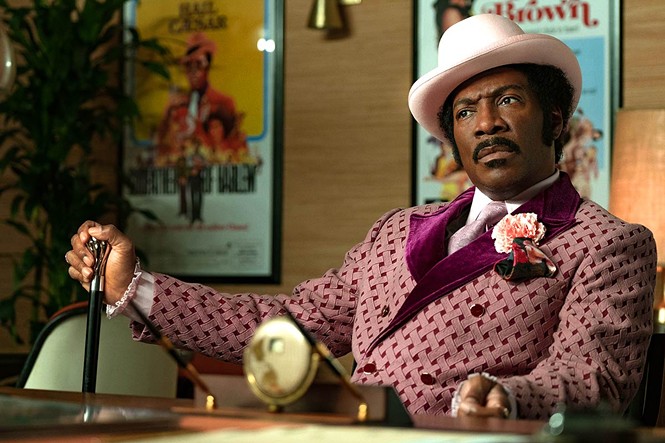 Black and Blue **
Earnest social consciousness and gritty exploitation thriller make for an awkward pairing in this story of Alicia West (Naomie Harris), a rookie African-American New Orleans cop who captures a crooked narcotics officer (Frank Grillo) on her body-cam in the act of murdering someone, then has to run for her life from her own colleagues to preserve the evidence. Peter A. Dowling’s screenplay sets up the promising notion of West as an outsider now in the rough neighborhood where she grew up, having to earn back the trust of her old friends after choosing the side they perceive as the enemy. But despite Harris’s intense performance, the movie ends up almost as relentless in its determination to make every cop a sadist as it is in its use of platitudes like “be the change,” and “murder’s murder, don’t matter who you are.” Despite a few slick, tense pacing choices by director Deon Taylor, even the final siege between police and drug dealers falls flat, because this is a movie that’s ultimately less interested in delivering action than in watching people deliver monologues. Opens Oct. 25 at theaters valleywide. (R)—SR

Countdown **
In this mildly stupid teen horror flick about a phone app that tells you how long you have to live, it’s not the app that kills you. The app is just conveying information. But if your remaining time is too short for your liking (as is the case, coincidentally, with most of the characters in the movie) and you try to cheat death, well ... you still die as scheduled, only now you get harassed by a demon beforehand. It’s like Final Destination without the cleverness, plusThe Ring without the scariness. The heroine, a young nurse (Elizabeth Lail), is duly spunky, and there’s an excitable priest (P.J. Byrne) and a needlessly snarky tech guy (Tom Segura) who add a little humor. The basic problem with the premise—just don’t download the app, dummy, and then you won’t be tempted to try to change your fate—is not addressed. It’s while wasting 90 minutes on mediocrities like this that you start to appreciate how short life really is. Opens Oct. 25 at theaters valleywide. (PG-13)—Eric D. Snider

The Current War ***1/2
Benedict Cumberbatch as Thomas Edison and Michael Shannon as George Westinghouse! In the fact-based story of the industrial, technical and capitalist battle to light up our world in the late 19th century! This isn’t going to be to everyone’s taste, even as director Alfonso Gomez-Rejon sidesteps typical costume-drama stodginess with an (ahem) electrifying visual style and a decidedly modern flavor to the storytelling. But those intrigued by the intersections between science and culture may find this a grand geek adventure with plenty of resonance for today’s world, almost 150 years later. From how quickly new technology can reach a saturation point so that we can barely remember life before it, to the unforeseen side effects such advancements can spin off, this is a grippingly-told tale of how two wildly different personalities—and the competitive clash between them—had an enormous influence on the world as we know it. There’s more than enough drama and character here to keep a prestige-television series going for years; we need more Nicholas Hoult as Nikola Tesla, for one. In the meantime, this will more than suffice. Opens Oct. 25 at theaters valleywide. (PG-13)—MaryAnn Johanson

Dolemite Is My Name ***
Maybe the biggest complement this middle-aged white boy can pay is saying that Rudy Ray Moore’s campy 1975 blaxploitation film Dolemite snapped into focus as a result of this movie. When Moore (Eddie Murphy) in this movie gets dressed down by a club owner with words to the effect of, “Vaudeville is dead”—mocking a guy who has tried singing, dancing, comedy and eventually making his own independent film just to be in show biz—it’s a failure to recognize the appeal of an art form that just wants to entertain you. Murphy is great here, conveying the notion that Moore is an entertainer down to his soul, even if the motivation sketched into the script by Scott Alexander and Larry Karaszewski (“I’ll show you, abusive stepdad!”) feels almost oh-by-the-way. Alexander and Karaszewski (Ed Wood) are clearly the perfect choice for this story, which ultimately focuses on the micro-budget making of Dolemite itself, though it might have benefited from a bit more attention to Moore’s makeshift creative family including Tituss Burgess, Keegan-Michael Key and Wesley Snipes. But no sense nit-picking. After all, isn’t the point entertaining people? Opens Oct. 25 at Tower Theatre. (R)—SR

Paradise Hills **
Allegorical science-fiction is hard enough to pull off without confusion as to what you’re being allegorical about. Emma Roberts plays Uma, a young woman involuntarily committed by her mother to an idyllic “center for emotional healing” where she and other young women are trained to be what other people want them to be. That’s sort of the extent of it for most of the running time, as Uma and her fellow “students”—including Awkwafina, Danielle Macdonald and Eiza González—resist the various treatments implemented by Paradise Hills’ headmistress (a gleefully sinister Milla Jovovich). Director Alice Waddington designs an imaginative physical production for this feminist mash-up of The Prisoner and A Clockwork Orange, but doesn’t offer much variation on her theme. Then, out of nowhere, the third act finds her and her co-screenwriters heading off into a completely different direction about the purpose of Paradise Hills—in some ways a more interesting direction, but also one that makes it hard to understand exactly who the villains are. The generous way to describe it would be “intersectional,” although that presumes that the multiple thematic notions are informing one another, rather than merely colliding. Opens Oct. 25 at theaters valleywide. (NR)—SR

Where’s My Roy Cohn? **1/2
The shadow of Donald Trump hangs heavily over director Matt Tyrnauer’s profile of the notorious attorney, and not entirely in ways that the filmmaker might have expected. Tyrnauer explores the entirety of Cohn’s public life, from his role as right-hand-man to Joseph McCarthy, through his private law practice defending mob figures, and ultimately how his ruthlessness and ability to manipulate the media influenced American politics, up to and including our current POTUS as his de facto protégé. It’s a thorough and often fascinating collection of details, though Tyrnauer’s visual style leans into overly dramatic bits like putting a hallucinatory blur around a segment addressing Cohn as a closeted gay man in 1970s New York. But as much as the filmmaker is underlining that “power in the hands of someone who is that reckless and that arrogant is a very dangerous thing” (nudge, nudge), he’s also bringing into focus the challenge of profiling a narcissistic sociopath trained by a similarly amoral parent to deny responsibility for anything: At a certain point, all you’re doing is cataloging sins, with a gaping hole where any sort of insight could be. Opens Oct. 25 at Broadway Centre Cinemas. (PG-13)—SR