THURSDAY 10/31
Get out of Town: Toquer Fest
It can be difficult to find things to do on the day of actual Halloween when it falls on a weekday. This won’t be the case for those who dare to rock down in Toquerville, where they’ll be hosting a a mini-fest the day of Halloween for all those who also dare to go out on a week night—as long as you’re in Southern Utah. The roster includes mostly St. George locals, with funk and soul from Pooch, indie rock from longtime duo Pale Dream and doomy post rock from Keepers of the Earth. From La Verkin comes the psych rock of Buffalo Paddle, and from the first opener, spoken word artists Iroh Hume’s project, somewhat ironically titled ...And We Never Spoke Again. Headlining will be the the festival’s founder, Jef Bjarnson, as the solo indie project Inner View. A Toquerville native who now resides in Nashville, Bjarnson has picked an abandoned dance hall at Toquerville City Park to be the stage for the evening’s revelries, which sounds spooky enough to warrant the festival being branded as “straight from Hell.” If karaoke night at your local bar just isn’t hitting it for you this Halloween, venture down to Toquerville and enjoy a night of local talent, all in one ghostly place.
Toquerville City Park, 425 W. Center St., Toquerville, 6 p.m., free; donations recommended, facebook.com/toquerfest 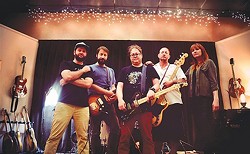 FRIDAY 11/1
Heavy Music + Heavier Beer
How fitting it is that the day that full-percentage beer will be ushered into Utah supermarkets in place of the formerly capped 3.2% beers of Utah is also Día de los Muertos, the day of the dead. On Nov. 1, The State Room marks the death of Utah’s old (like, dating back to Prohibition old) and limited beer law while celebrating the holiday with with the help of local acts Wey, Thunderfist and Mañanero (whose frontman, Chopper, graced the bottle of Squatter’s Squasatch Hoppy Pils a few years back). Wey will deliver what they term “punk rock boogie” to the party, which is absolutely that, with songs that have puckish guitar chops alongside a somewhat funky energy that that keeps them from feeling too dark. They’ll be preceded by Thunderfist, another long-active SLC based group who deals more in Nashville-oriented grit and biker-bar ready zeal that’s as cannon as Motörhead. For his part, opener Mañanero has also been at the rock game for a long time, at it now particularly with a kind of dark, gothic folk rock that is indeed heavy. And, it wouldn’t be a celebration of heavy beer without help from a local brewery, a role which will be filled by sponsor Bohemian Brewery. The State Room, 638 S. State, 8 p.m. $15, 21+, thestateroompresents.com