THURSDAY 2/20
Stonefield
It can be challenging to write and record an album. It’s even harder to do both in the midst of a world tour. But that’s exactly what Australian desert psych quartet Stonefield has done, and much more. Four sisters comprise the band—Amy, Hannah, Sarah and Holly Findlay—who started practicing together in their parent’s farm shed as teens, and have since toured extensively. Stonefield has gone from a small rural Australian band to touring the world with bands like Fleetwood Mac, King Gizzard, King Tuff and Black Rebel Motorcycle Club. Stonefield has three albums so far; their most recent, BENT, was recorded in just five days by Joe Walker and Stu Mackenzie from King Gizzard. At King Gizzard’s studio in Melbourne, BENT was recorded almost 100% live. This gives the album a raw, intense power that defines their heavy and psychedelic sound. “Sleep” starts the album with layers of distortion and slow tempos that could almost be described as “sludge;” “People” gives off the retro vibe of ’60s band Iron Butterfly or early Black Sabbath. Clearly, Stonefield is a band for classic rock and metal lovers alike, as BENT is raw and heavy both musically and lyrically. “The album is about our own experiences and stories,” says Amy Findlay, “Songs about the fear of walking home alone at night, stories of what it’s like being an all-female band and the power of supporting one another.” Don’t miss a night of psychedelic heavy feels from Stonefield, who are touring with Hoovereiii and Say Hey at Urban Lounge this Thursday. (Emma Roberts) The Urban Lounge, 241 S. 500 East, 9 p.m., $15, 21+, theurbanlounge.com 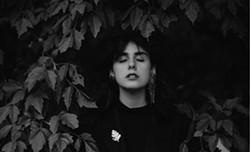 FRIDAY 2/21
Little Moon “Unphased” Release Show
The first time I ever really listened to “Lovin’ You” by Minnie Riperton, I was transfixed. The 1974 track showcases her extremely high vocal range, with notes few people can reach. But if they can, as Riperton does, such a singer has access to a realm of vocal tenderness not available to most. Riperton came to mind immediately upon hearing excerpts of songs of Provo’s Little Moon, whose high soprano is the perfect vehicle for her dramatic and confrontational folk-infused music. She hangs out in the range easily and frequently, and when she dips down to a range most would find easier, it feels like a treat to hear the expressiveness of her voice’s lower register. Besides her range, Little Moon recalls the style and form of artists like Joanna Newsom, with similar whimsy and pacing. The artist has been busy getting an album together, dropping hints and previews here and there for the past few weeks. And while the videos available on her Facebook demonstrate a young artist with a guitar, her show—which will feature early and late viewing times—also makes use of 11 other musicians, which suggests that broader sounds can be expected. The night will be part of Velour’s celebration of “Les Femmes De Provo,” which spotlights all the fantastic music-making women who make Provo what it is. Fellow mover and shaker Mindy Gledhill will open. (Erin Moore) Velour, 135 N. University Avenue, 9 p.m., $10, all ages, velourlive.com

SUNDAY 2/23
Envelop Sound Bath
Many might think of ambient music as the stuff they put on at the massage parlor, or during a yoga class—it’s not there to be actively listened to, but to act as soothing background noise. But that just isn’t the case at Envelop, a less-than-a-year-old venue in Marmalade that features a surround sound system of 32 speakers providing intense and immersive listening experiences. Those who gather in the dark, circular space with its smoothly changing pattern of multi-colored lights can enjoy nights of album listening—one such night showcased Fleetwood Mac’s Rumours all the way through, which sounds dreamy—and live music, but also of deep ambient music-listening. When they opened a few months back, I was invited to the opening show, and experienced a live set much like what this “sound bath” seems to be. Envelop seeks to provide a space for listeners to not only find deep relaxation within the circle of complete sound, but to be reunited with the profound connection between the self, those around you and the sound itself. Combining ambient recordings and captured sounds from nature, this evening is perfect for anyone feeling overstimulated. As an ambient-lover myself, I can vouch that listening to it can act as a hard reset on an oversaturated brain. You can let it wash over you, or focus on it more closely while still maintaining a feeling you wouldn’t get listening to any other kind of music. In an environment like Envelop, there’s ample opportunity to sit back, relax and simply listen. See where it takes you. (Erin Moore) Envelop, 660 N. 300 West, 10 a.m., $25, all ages, envelop.us