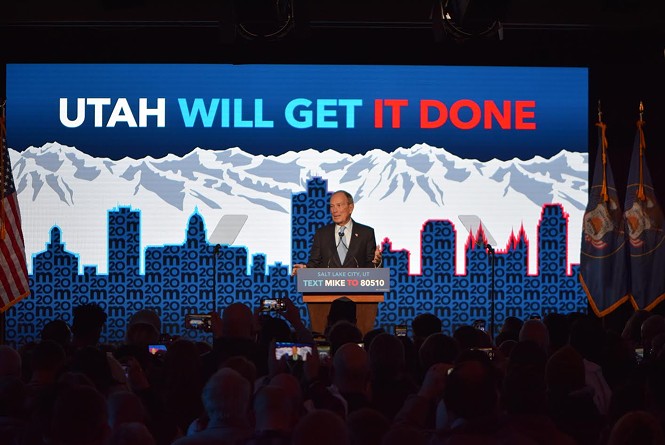 
“We need a nominee who can deliver,” Bloomberg told the crowd. “Let’s face it, Donald Trump is the world’s biggest schoolyard bully—no respect for sensibility, decency or facts or honesty. And I want to go toe-to-toe with him and take the fight to him … I won’t let him bully me and I won’t let him bully you, either.”


Bloomberg’s campaign rally came just hours after the Democratic debate Wednesday night in Las Vegas. While entering Venue 6Six9, a reporter asked Bloomberg how he thought he did the previous night. The candidate responded with a simple, “I’m fine, thank you.”


Inside, Bloomberg was introduced by fellow New Yorker and Black Diamond CEO Peter Metcalf. The former New York City mayor said it was nice to be welcomed on a stage where people were actually happy to see him. He criticized left-leaning candidates for failing to build a strong enough coalition to beat Trump.


“Now I know how it feels to be a Utah fan in Provo during the Holy War,” Bloomberg said.


But the previous evening, Warren and others spent part of the debate taking Bloomberg to task over non-disclosure agreements he has had women sign over potential sexual harassment and gender discrimination in the workplace, as well as his wealth and his self-funded campaign. Wednesday was the billionaire’s first appearance on the debate stage.


So the next morning, Bloomberg, who has been endorsed by Utah Rep. Ben McAdams and former Salt Lake City Mayor Ralph Becker, retreated to the Utah niceties he’s played up before.


“Every time I come here, I look at the mountains and the valley in Salt Lake and I think, ‘Yep, this is the place,’” Bloomberg said after walking onstage. “I have a question for all of you, and I mean no offense by this, but let’s say Brigham Young showed up today and the question is, ‘Will he settle in Salt Lake City or, given the construction on I-15 is so bad, he’ll call Sandy his home instead?’”


Bloomberg’s “This is the place” comment was reminiscent of his campaign stop at Impact Hub in January (he is the only candidate so far to come to Utah twice this election cycle). Bloomberg started that event talking about getting some Jell-O.


Utahisms aside, the presidential hopeful spent much of his speech comparing himself to Trump.


“Even though Donald and I are both from New York, the truth is we could not be more different,” Bloomberg said. “In fact, I bill myself as the un-Trump. Think about it. He breaks promises, I keep them; he divides people, I unite them; he’s a climate denier, I’m an engineer. I actually believe in science, imagine that.”

“Even though Donald and I are both from New York, the truth is we could not be more different." tweet this

Referencing his campaign slogan “Get It Done,” Bloomberg later explained the meaning of “it.”


“Getting it done means finally providing health insurance to every American who lacks it and lowering costs for everyone else,” he said. “We can do it without a massive tax hike on the middle class … we can do it by building out Obamacare and bringing down drug prices.”


Bloomberg also spoke about public lands and climate change—a topic well-known among Utahns and one reason Metcalf is backing him.


“The current administration is like a fox in a hen house,” Metcalf said. “It says it’s protecting our public lands, our air and our water, but instead it’s feasting on them for the short-term benefit of a few. We need to make that stop.


“We need a president who will reverse these exploiting short-term legacy policies of a bygone era, embrace the future, unite the country and defeat Donald Trump. Mike Bloomberg will get the job done.”


As Bloomberg said Thursday, that will take another bully.


“We all know that Trump is a bully, but I’m a New Yorker and I know how to deal with bullies. I do it all the time.”