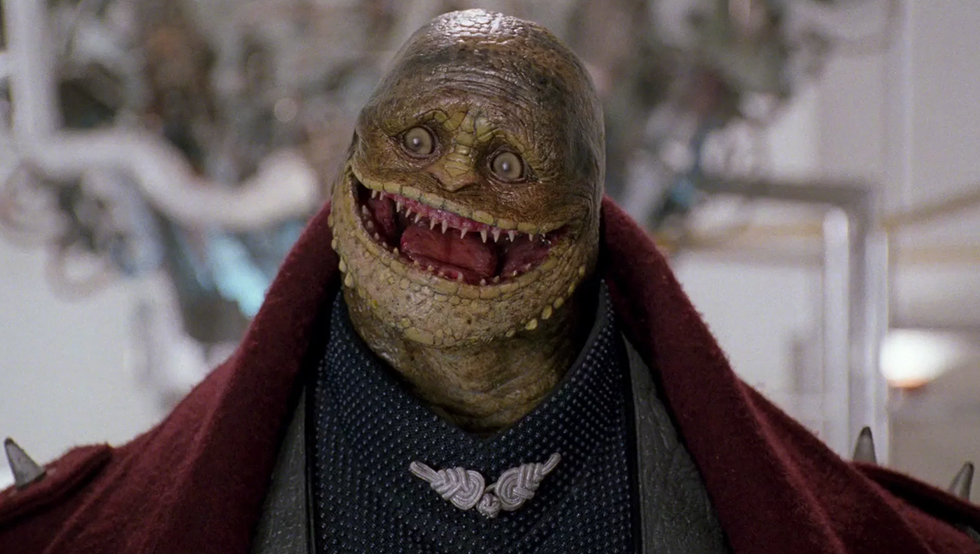 I’m not sure on which planet I’m living. Sonic the Hedgehog has not only made a shit-ton of money—even with ol’ gravel voice himself, Harrison Ford, nipping at Sonic’s high top-clad heels in Call of the Curmudgeon—but has a certified “Fresh” ranking on Rotten Tomatoes. Sure, Rotten Tomatoes is no arbiter of taste—Revenge of the Sith clocks in at 80%, surely a sign that Satan is RT’s webmaster. But amid the myriad video
games that have become movies, Sonic seems to at least be tolerable, despite starring James Marsden.


Therefore, I think it’s a perfect time to reflect upon the best and, yes, worst video game-to-movie adaptations of all time. Note: This list is highly subjective. If it were objective, director Uwe Boll would secure all five worst rankings. But that’s just cruel and boring. Let’s start with five good flicks in no particular order (don’t @me). Important caveat: In addition to being a subjective list, “good” here means “not a dumpster fire.”

The first of the roughly 1 million RE adaptations is possibly the creepiest (I use “possibly” because I’ve only seen one other), and its whole what’s-going-on-OMG-THE-UNDEAD vibe is on point. Milla Jovovich, as Alice, uses her natural frostiness to lead a group of people into a genetic research facility called The Hive, where a rogue employee has unleashed a virus that turns anyone into a zombie (or something else equally undead and horrible). Aside from zombies, Alice and the crew battle the Red Queen, an artificial intelligence that runs the Hive and is determined to kill them. Best scene: The lasers. Oh God, the lasers.


Pokémon Detective Pikachu
Insurance adjuster Tim (Justice Smith) and Pikachu (voiced by Ryan Reynolds) team up to solve a crime. Or at least I think that’s what happens. I watched this movie on demand not long ago and I’m still not sure what I saw, though I have to admit I wasn’t bored (that goes a long way). Part of the reason I was confused is because my older kid is super into Pokémon and this movie doesn’t match up with the stuff he’s reading (or that I read to him). But Ryan Reynolds as Pikachu? Sold.

Back in 1995 when video game adaptations were a novelty, we all thought this flick was crud because we had little to compare it to. Flash forward to now and Mortal Kombat looks like high art. If you’re not familiar with the game, that’s just as well, because this PG-13 kid’s movie dispenses with the game’s super graphic violence. The plot? A bunch of good guys battle bad guys in an effort to save the world. It’s as simple as can be, and it’s nice to see Veronica Vaughn from Billy Madison kick the crap out of some people. This is also about the last time Christopher Lambert was relevant in any kind of cinematic setting.


Street Fighter
Again, “good” being relative, Street Fighter features Jean-Claude Van Damme doing his JCVD thing before he stopped taking himself too seriously. It also features Raul Julia in his final film role. You can see how ill he was each time he shows up on screen, but that doesn’t stop him from sending chills down your spine when he tells Ming-Na that the most important day of her life—when her father was killed—was just another Tuesday for him. That’s power.


Lara Croft: Tomb Raider
The special effects don’t hold up and the story is for the birds, but that makes it on par with other adaptations of its time. Credit Angelina Jolie for playing Croft with just enough of a raised eyebrow to make it look as if she knew Tomb Raider was kind of dumb, but not so dumb we couldn’t have fun with it. And this is weird: Daniel Craig, before anyone really knew who he was, plays an American. Come because you like the game, stay because it’s fun watching Jolie jump from a chandelier and not seem to be bothered by that piece of hair always falling in her face.

Super Mario Bros.
It should come as no surprise that Super Mario Bros. makes the bad list, mostly because it runs so far afield from anything resembling the game on which it’s ostensibly based. Instead of feeling like a magical-yahoo dream world of pipes and mushrooms, the movie resembles what it must feel like to live in a sewer. Plus, it makes as much sense as Van Halen replacing David Lee Roth with Sammy Hagar. At least leads Bob Hoskins (Mario), John Leguizamo (Luigi), and Samantha Mathis (Princess Daisy) give it their all. Most compelling, though, is that producer Roland Joffé directed The Killing Fields and The Mission. No, his career was never quite the same after this.


Assassin’s Creed
How do you make Michael Fassbender boring? Give him this script and tell him to recite all his lines as if he’s waiting for the Kaopectate to kick in. I can’t remember the last time I saw a video game adaptation simultaneously this self-important, grandiose and dull. Plus, the $125 million budget must not have gone toward the special effects or production design, because everything looks like it was shot in my backyard and edited with Avid’s 1989 software package. And just look at this wasted cast: Marion Cotillard, Jeremy Irons, Brendan Gleeson, Charlotte Rampling, Michael K. Williams. You don’t even have to see Assassin’s Creed to feel cheated. The stats should be enough. The story? Who cares.


Prince of Persia: The Sands of Time
Before Jake Gyllenhaal realized he’s a character actor in a leading man’s body, he was cast in this big-budget snooze-fest. He’s a prince! He’s Persian! He’s white? OK, sure. Gemma Arterton, as Princess Tamina, delivers each line as if she can’t quite believe these are her lines, and for a Jerry Bruckheimer production, the special effects are decidedly average. You can’t win them all, I guess. Even Ben Kingsley and Alfred Molina look clueless, no easy feat. I feel asleep in the theater watching this movie, and it’s so, so, so loud. That should tell you everything.


Need for Speed
You know, I don’t hate this movie like other critics hate it, but for a street racing movie, it certainly drags (ha). The stunts in an episode of “The Dukes of Hazzard” are better than anything in Need for Speed, and NfS is longer than two hours. What?!! As much as I enjoy hearing that raspy-ass voice come out of a guy who looks like Aaron Paul, I don’t need to hear it for that long. And why does anyone talk this much in a movie that’s all about the stunts? OK, I kind of hate it.


Tomb Raider (2018)
Chalk this up to a well-intentioned misfire. Though the stunts are more harrowing and (arguably) more realistic, this reboot is largely devoid of the humor in Angelina Jolie’s first go-around as Lara Croft (the less written about the second, the better). That makes this big-screen version of the video game kind of stiff, even if lead Lara Croft is played by Oscar-winner Alicia Vikander. Note to the execs: Gritty doesn’t always mean better. What worked for Batman (the Dark Knight series) hasn’t worked for just about every other comic book or video game adaptation. Take notes, people.