This Pump’s for You | Buzz Blog

This Pump’s for You

Ogden's Own Distillery, makers of Five Wives Vodka, temporarily gets into the hand sanitizer biz.

In case you haven’t read your well-meaning aunt’s Facebook posts, it’s the end of days out there. We’re in the midst of a pandemic that recently reached armageddon-level frenzy thanks to an accompanying 5.7 magnitude earthquake (which caused Angel Moroni to lose his golden trumpet, no less!) Oh, and places like the state fairpark? Well, that’s closed through April 4 not because spaces like it are heading the Dept. of Health’s mandate, oh no … it’s because the Four Horsemen of the Apocalypse are surely using the Days of '47 Rodeo Arena as practice grounds for when they roll down l-15 (joke’s on them once they reach Thanksgiving Point).


Taking a page from Jesus’ book, a local distiller is turning vodka into hand sanitizer—sort of.


Muting the panic, which has included long lines and depleted stock of basic groceries at markets city- and country-wide, Steve Conlin, CEO of Ogden's Own Distillery, and his partners decided to do something to help alleviate the situation. Specifically, use the company’s existing infrastructure to produce hand sanitizer—at least temporarily—while big-name versions return to store shelves. Conlin announced the move on his personal Facebook page on Wednesday, and 24 hours later, the plan gelled. 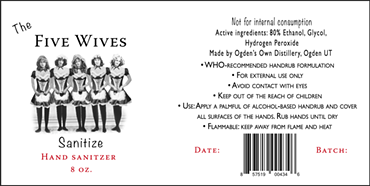 “There are many types of licenses available from the federal government regarding alcohol,” he explained. “One of them is an industrial permit, and so to make anything that’s consumer-grade, you need to have that permit—and we only had a spirits [one].” Noting the permitting process usually takes 120 days, Conlin acted as soon as he heard the Alcohol and Tobacco Tax and Trade Bureau, which regulates the production of domestic spirits, beer and wine, waived the distinction this week in response to COVID-19.


The move echoes similar initiatives by Portland’s Shine Distillery & Grill and luxury powerhouse LVMH. Since this article's publication, City Weekly readers pointed out that Sugar House Distillery and Park City's Alpine Distilling have also signed on to produce their own antibacterial gel.

For Conlin and Ogden's Own, the decision is the latest in a banner week full of community support, which has included a Supermarket Sweep-style purchase of $10,000 worth of gift cards at northern Utah bars and restaurants they plan on giving away, and a pledge to donate all alcohol sales from March and April to recently furloughed and laid-off bar and restaurant employees.

“We’ll do it as long as we have containers." —Steve Conlin tweet this

Harkening the arrival of “The Five Wives Sanitize,” Conlin said the labels are off to the printers, company founder Tim Smith will be mixing the first batch Friday morning “and we’ll be bottling shit before noon.”


Smith and Co. hope to fill a bevy of gallons, 10,000 16-ounce bottles and 9,000 personal-carry 2-ounce spray head units. Conlin estimates the hand sanitizer will cost around 75 cents an ounce and the initial rollout point will be the distillery’s Ogden storefront.


“We’ll do it as long as we have containers,” Conlin said, adding that he hopes to create filling stations where people can flock with their own reusable containers as a way of cutting down on plastic waste.


Along with fans of the company’s spirits, places like the Ogden Clinic, police entities and even the Utah Department of Alcoholic Beverage Control (DABC) have expressed interest in the sanitizer. Some church groups have also come a-knockin’, though Conlin wouldn’t elaborate.


His advice for other small-business owners?


“Do something. Do anything. Do whatever you can—whether it’s helping your neighbors or asking if you can pick up groceries for somebody … whatever,” he said. “We’re lucky to be in a position where we can still make a difference; everybody's different. I have a philosophy that there are three different types of people in these situations: there are victims, there are helpers and there are leaders—and we’re just trying our best to be a leader.”


For product updates, follow Five Wives Vodka on Facebook. No word yet on how much hand sanitizer The Church of Jesus Christ of Latter-day Saints plans to produce with its $100 Billion investment fund.