Virtual Fest for S&S
Before Ritt Momney got their start as indie darlings on the rise, they were playing shows at Kilby Court, just like any other small local band. Now, from their new locale in Los Angeles, they’re paying it forward to Kilby by organizing Virtual Fest, an online streaming festival featuring a roster full of Utah-based artists starting at 4 p.m. this Sunday, May 24. Though there’s no door fee—since there’s no door to walk through—those who watch are encouraged to donate to S&S, knowing that they also can redeem that money for future tickets and a t-shirt. Without the constraints of a physical venue, live-stream events like this have the potential to feature many different artists, and this one takes advantage of that freedom. Twelve local acts will play (roughly) 15-minute sets, starting out with Ellee Duke and moving onto Anaïs Chantal, Courtney Lane, Kipper Snack, Brother., Dad Bod, The Rubies, Blue Rain Boots, The Moss, Joshua James, The Backseat Lovers and finally Ritt Momney themselves at 7:15 p.m. It’s a veritable deluge of well-known talent from around Salt Lake City and Utah County, and will all go down on Ritt Momney's YouTube channel. Find the event page, links and info on donating up at Kilby Court’s Facebook page.

Symphony Sounds on Classical 89
Music lovers of all genres are suffering right now. With live concert attendance still in the distant future, music makers and shakers are keeping the sounds alive, virtually. The Utah Symphony has teamed up with Classical 89 to offer broadcasts of their live recordings from past performances, from 9 a.m. and 2 p.m. weekdays and at 9:30 a.m. Saturdays. Lovers of classical music can enjoy the symphony morning, noon and night all week long, and check in on the upcoming programming at classical89.org under the Utah Symphony tab. Not only are they rebroadcasting classic works, but the recordings feature some big names like Karina Canellakis, Boris Giltburg and Phillipe Quint. Expect beloved classical pieces from Bach, Tchaikovsky, Chopin, Beethoven and many more. And whether you’re a fan of the classics or not, there is something to be said of starting your morning with a strong cup of coffee and a violin concerto—especially if you’re missing Coffee Garden hangs, where that pairing is pleasantly ever-present. If you miss the rebroadcasts, more recordings from the Utah Symphony are available at Utah Symphony's listening room, which is otherwise another great resource for finding entertainment while stuck in quarantine—they’ve even got “quarantunes.” 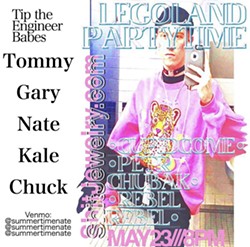 Shit Jewelry is a Placeless Place for People
When shows started first happening on shitjewelry.com at the beginning of quar, it was just a web page with a show poster on it and a link to a YouTube page. Upon visiting again in anticipation of this Saturday’s (May 23) upcoming show, you can see that it’s undergone some apparent developments. Now the YouTube videos are embedded in the page, and will, I’m guessing, contain the video when the show goes live at 8 p.m. The show poster is dated to an old one, because the real upcoming set features Cupid Come, Petr Chubak and Rebel Rebel. As they have since the beginning, there’s encouragement to “tip the engineer babes,” those who helped make the page possible, listed as Kale, Gray, Nate, Tommy and Chuck with the Venmo address @summertimenate listed for tippers to use. Most interestingly on the still rather spare web page, though, is a quote by Judith Butler from her book Precarious Life (Butler is one of the foremost gender philosophers of the last 30 years for those who aren’t savvy). It reads, “When we undergo what we do, something about who we are is revealed, something that delineates the ties we have to others, that shows us that these ties constitute what we are, ties or bonds that compose us.” Below this quote—which already brings to mind the struggle of social connection these days—there are some vague notes, seemingly from the page engineers themselves, that read:

“Thinking about libertarians forgetting about being vulnerable and beholden to others, about the team sport that is living. A babe needs a mom. My great grandma needs my aunt to bring the groceries, needs the dogs to talk to. I need a job from someone. You need another person’s voice to dance with … Insane how the non-living virus creates a microbiological relationship with each of us, forming new combinations. There’s also combinations where the virus is not there. Where Someone In Particular is not there. Who are we again? Can’t wait for some other me to see some other you.”

Live streams are somewhat awkward in my view, a shadow of the real thing. But this little note throws into perspective that at least it’s something, a vital connection, a simple “voice to dance with.” Shit Jewelry, clearly, is anything but shit. Keep up with Shit Jewelry show info on Instagram.