by Erin Moore and Emma Roberts 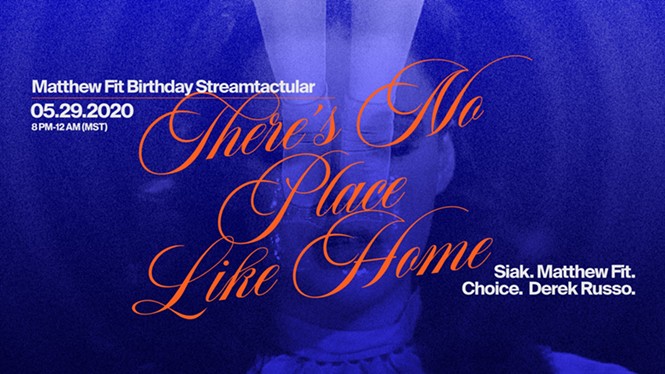 Streamtacular Twitch Party w/ Derek Russo, Choice (China Doll), Matthew Fit, Siak
It’s all DJ’s on deck. Local DJ Matthew Fit is throwing a birthday bash twitch via Twitch this Friday (May 29) evening. The event will be hosted by New City Movement, a progressive collective focused on dance and art in Salt Lake City. New City Movement has cultivated an incredibly positive and forward-thinking movement, and some top notch DJ’s are now a part of that. Joining the Twitch stream are the NCM artists Choice (aka the founder of China Doll events), Siak and Derek Russo, most of them frequent players at Alibi and Tinwell bar (before the latter closed its doors). Like many other artists, DJs have been left in the liminal space of having nowhere to perform, while still harboring the desire to share music with the masses. Locals and lovers of electronic music are invited to join the celebrations starting at 8 p.m. Friday. Head over to New City Movement’s Twitch stream, and maybe tip your DJ’s (if you can) to show them some love! (Emma Roberts)

Beehive Benefit Instafest goes for Round Two
Many venues are struggling right now as they struggle to keep up with rent on their spaces with no income coming in from shows. Creativity for dealing with this situation is abounding, and for The Beehive’s part, they’re turning to the now-ubiquitous live stream concert to help spur people to donate to their cause. If you’ve frequented the spot, you know how special it is to the music community, but also because it’s one of those rare, super-cool and versatile spaces that’s hard for DIY folks to have locked down. The Beehive collective has turned their space into so much more than a music venue, frequently hosting art shows and other kinds of parties with an emphasis on creating safe spaces for queer and POC members of the SLC community. They are also the home of Mark of the Beastro, a year-old new restaurant that specializes in easygoing vegan fare. To keep this incredible venue alive and get some quality entertainment at the same time, visit @beehiveslc on Instagram and tune into the live stream fest this Saturday (May 30) from 1 p.m. - 8 p.m. A huge roster of artists are going to appear on the stream, including well-known names around town like Clark!, Eichlers, Ash Bassett, Sonnets and Pity Party. Check out their Instagram or Facebook page for the full lineup and times, and donate then or now to owner Konrad Keele’s Venmo or PayPal at @Konrad-Keele and konradkeele@gmail.com, respectively. (Erin Moore)