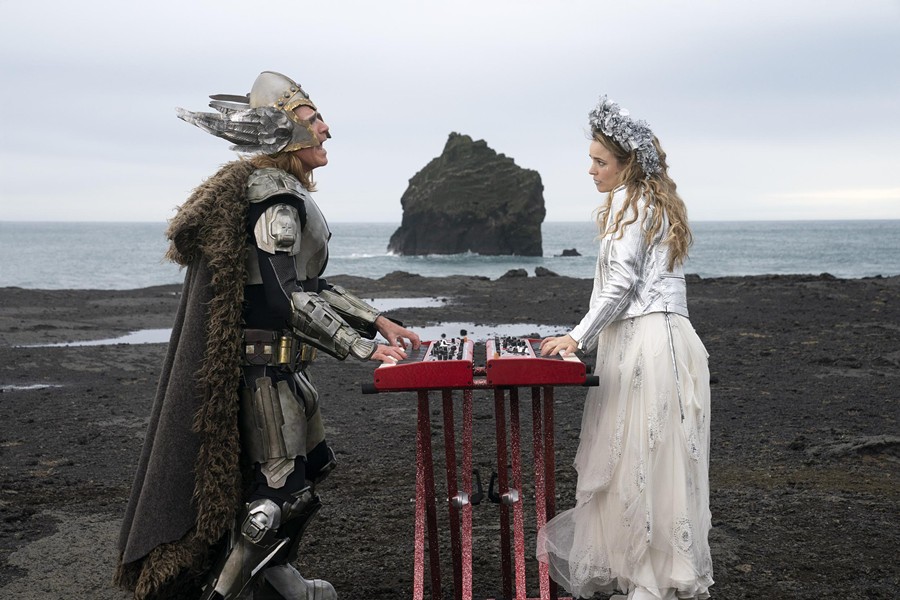 The Audition ***
In a character study that walks a precarious tightrope between ambiguous and merely opaque, it’s left to the acting subtlety of Nina Hoss to find safe ground—which she’s more than capable of accomplishing. Hoss plays Nina, a violin teacher at a Berlin conservatory who takes a passionate interest in mentoring scholarship student Alexander (Ilja Monti), even to the detriment of her relationships with her husband (Simon Akbarian) and young son, Jonas (Serafin Mishiev). Writer/director Ina Weisse parcels out Anna’s back-story in a way that demands patience in understanding her obsession with Alexander, as well as what happened to Anna’s own musical career. Those blanks do get filled in, however—there’s one disturbing moment where we get a clear picture of the way Anna’s father thinks children need to learn lessons—offering a complex portrait of someone who has been in some ways psychologically broken by not being able to reach her highest goals. Hoss becomes the anchor, finding a way to convey Anna’s mix of single-mindedness and free-floating uncertainty with a coiled perpetual tension. While the narrative at times feels too dense, and vague about what drives the supporting characters, there’s at least one compelling arc at the center. Available June 26 via SLFSatHome.org. (NR)

Ella Fitzgerald: Just One of Those Things **1/2
Director Leslie Woodhead has previously helmed made-for-TV documentaries about the death of Princess Diana, the death of John F. Kennedy and the 9/11 terrorist attacks, and the British filmmaker brings the same sturdy obviousness to his profile of the legendary jazz singer. The film tracks begins with the pivotal moment of Fitzgerald’s eye-opening performance at a 1934 amateur night at Harlem’s Apollo Theater, backtracking to early years that included reform school and homelessness before following her 60-year professional career. Along the way, there are plenty of individually interesting tidbits, including the mentorship of band leader Chick Webb and the role of manager Norman Granz in shifting the focus of her work in the 1950s from bebop to the Great American Songbook. But it’s also the kind of documentary that signals “we’re now going to talk about the Depression” by showing stock footage of unemployment lines, and that spends too much time on talking heads effusively noting how great Fitzgerald was. It’s wonderful to listen to so much of the amazing vocalist at work, but the snippet of a performance where she begins improvising forgotten lyrics to “Mack the Knife” is the kind of insightful curve ball this movie could have used a little more of. Available June 26 via SLFSatHome.org. (NR)

Eurovision Song Contest: The Story of Fire Saga **
There’s such a fundamental miscalculation at the heart of this movie that it’s hard to see how it ever could have recovered. The set-up seems promising enough, focusing on an Icelandic musical duo—Lars (Will Ferrell) and Sigrit (Rachel McAdams), who call themselves Fire Saga—who get their long-awaited shot at performing in the long-running Eurovision televised talent competition. If you’re expecting that the resulting narrative will be a broad parody of such talent shows, you’re barking up the wrong tree. Apparently using the name of the real-life Eurovision contest forced everyone involved to play it more-or-less straight, meaning that most of the performances—except for Fire Saga’s, which generally turn into Spinal Tap-esque disasters—are a complete waste of time. In fact, with the notable exception of Dan Stevens’ engagingly over-the-top performance as a Russian pop star, it’s hard to find where the laughs are meant to come from; Stevens gets more mileage out of the way he pronounces “unique” than anything in the rest of the bloated running time. By focusing the story on Sigrit’s unrequited affections for Lars, Eurovision Song Contest sacrifices its shot at inspired silliness in favor of bland rom-com hijinks. Available June 26 via Netflix. (PG-13)

The Last Tree **1/2
Maybe it’s not entirely writer/director Shola Amroo’s fault that so many of the things he’s trying to do here feel like they’re cobbled together from other similar stories, without enough individual vitality. It’s the story of Femi (Sam Adewunmi), a Nigerian-born youth who is pulled from a foster mother in rural England to be returned to his single mother (Gbemisola Ikumelo) in London, where he begins working for a drug dealer. Amroo lays on the idyllic life of young Femi in the country, leaving the details of his pre-foster home life with his mother entirely blank. Then the plot components of teenage Femi’s life in London start to feel frustratingly rote and underdeveloped, from the dueling surrogate dads of a criminal and a teacher, to an awkward attempt to insert a romantic sub-plot. There are nice touches throughout—like Femi pretending he’s listening to Tupac on his headphones when he’s really into The Cure, or an effective use of the Spike Lee™ Actor-On-A-Dolly-Cam—and an effort to recognize the complexity of immigrant cultural assimilation, especially once Femi and his mother visit his father in Nigeria. It’s just not enough to bring emotional impact to a story that’s trying really hard to manufacture it. Available June 26 via SLFS.org. (NR)

My Spy *1/2
From Kindergarten Cop through The Pacifier and on to last year's Playing With Fire, movies have a long history of operating under the misguided assumption that nothing is more incongruously hilarious than a gruff, musclebound action star having to deal with adorable kids. The latest proof of this fallacy comes in the form of Dave Bautista as JJ, a former Army Ranger whose post-military career as a CIA operative is off to an inauspicious start. He lands the crap gig of surveilling Kate (Parisa Fitz-Henley), the widowed sister-in-law of a suspected terrorist, and Kate’s precocious but lonely 9-year-old daughter Sophie (Chloe Coleman)—who blows JJ’s cover and blackmails him into various tasks. The nature of those tasks is irrelevant, except to the extent that they’re supposed to make JJ endearing by virtue of being humiliated by and/or being nice to youngsters. While Bautista has his moments, and decent supporting help in the form of Kristen Schaal as his over-eager partner, there’s neither enough spark in the character dynamics nor enough punch in the PG-13 action to transcend the formula. And no, it is absolutely not cool to rip off a set piece from Raiders of the Lost Ark even if you openly acknowledge that’s what you’re doing. Available June 26 via Amazon Prime. (PG-13)

The Wild **
The earnestness with which director Mark Titus addresses his twin subjects—the threat to the salmon fishery in Bristol Bay, Alaska, posed by a proposed mining operation, and his own recovery from alcoholism—is bound to connect with some viewers, and more power to them. And there is an interesting undercurrent to Titus’s story about how to maintain an activist mindset in the face of so much potential existential despair. But ultimately, there’s something more irritating than inspiring to this mix of scattershot filmmaking and navel-gazing. At times it feels like Titus wants to be a junior Michael Moore, putting the slick spokespeople for the mining company on camera but only challenging their assertions off camera. Meanwhile, by making the focus his own personal connection to wild salmon—his movie serves as a follow-up to his 2014 documentary The Breach on much the same subject—and his own recovery process, Titus leaves too little time in his 64-minute running time to focus on those whose lives will be completely destroyed by the loss of the salmon, like the local Native peoples and commercial fishermen. This call to action needs a more dynamic through-line than one that takes a detour into Titus going fishing with actor Mark Harmon. Available June 25 via SLFSatHome.org and ParkCityFilm.org. (NR)