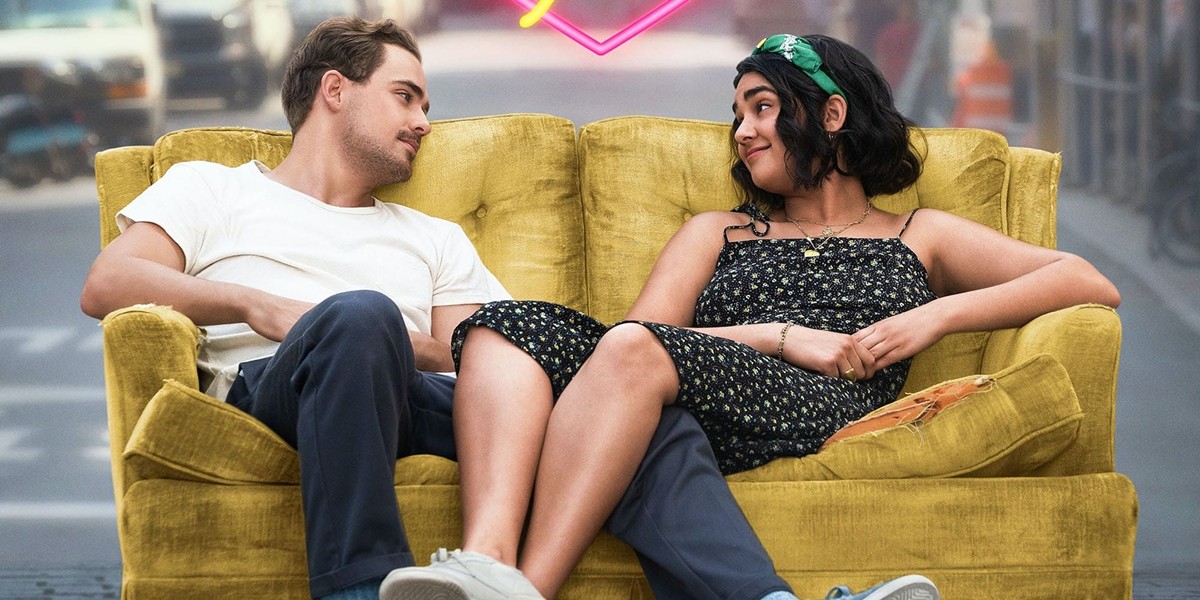 The Broken Hearts Gallery **1/2
Geraldine Viswanathan deserves lead roles, many of them, in every possible kind of comedy—and she also deserves a little bit better than this kind of a rote rom-com. Writer/director Natalie Krinsky (a one-time Gossip Girl writer)  casts Viswanathan as Lucy, a romantic New Yorker with a penchant for saving way too many trinkets from her failed relationships. After her latest break-up, she meets-cute with would-be hotelier Nick (Dacre Montgomery), and uses Nick’s in-progress hotel as a venue for a pop-up art installation dedicated to memorabilia to lost loves. Every moment in Krinsky’s script feels like it was cut-and-pasted from a romantic comedy blueprint—every karaoke sing-along with Lucy’s gal-pals (Phillipa Soo and Molly Gordon), every montage (there are at least five), every time a character walks in on another character at the worst possible moment. But like any formulaic genre, it can work with the right casting, and Viswanathan sparkles with charm and comedic timing—and not nearly enough chemistry with Montgomery’s bland handsomeness. Arturo Castro (as Nick’s buddy) provides so much more funky energy, and clicks so much better with Viswanathan in their scenes together, that it’s hard not to wish for something that more clearly valued funny over inoffensively cute. Available Sept. 11 in theaters. (PG-13)

From the Vine **
Many stories have used travelogues to sun-kissed countries as a backdrop for a character needing a life change—and usually, the more fanciful they are, the less they actually connect on a human level. Director Sean Cisterna and screenwriter Willem Wennekers adapt Kenneth Cancellara’s novel about Mark Gentile (Joe Pantoliano), an executive for a Canadian car company who ditches his job over a moral scruple, and impetuously returns to the small Italian village where he grew up, ultimately deciding to re-start his late grandfather’s vineyard. Mark’s wife Marina (Wendy Crewson) and wayward daughter Laura (Paula Brancati) eventually join him, and in theory the story should be about how this fragmented family is able to reconnect in a new environment. But Cisterna goes all in on the magical grace notes, from Mark’s dreams of his grandfather to moving statues to grapevines literally talking. Throw in the obligatory band of colorful locals, and there’s not much left that’s genuine in the questions of whether Mark will find a satisfying calling, or Laura will find her own life path, etc. “This whole Italian adventure has somehow fixed everything!” Marina literally exclaims near the end, at which point it’s time to cue the cheering crowd, the drinking of wine and noting the passage of 90 inconsequential minutes. Available Sept. 11 via SLFSatHome.org. (NR)

Jimmy Carter: Rock & Roll President **1/2
The title proves to be misleading in multiple ways: First, by suggesting that it’s primarily about the 39th U.S. President in terms of his relationship with music, and second, by suggesting that the music in question would primarily be rock & roll. Instead, Mary Wharton presents kind of a haphazard documentary overview of Carter’s political career, touching on his friendships with early supporters and longtime friends like Greg Allman, Willie Nelson and Bob Dylan. There are indeed plenty of great musical performances included here—from the Allman Brothers Band concerts that were among Carter’s first fundraisers for his presidential campaign, to Aretha Franklin at his inaugural gala, to White House performances by legends like Dizzy Gillespie—and at least a token effort to connect Carter’s wide-ranging musical tastes to his upbringing in a predominantly Black part of Georgia. But the greatest-hits packaging of Carter’s 1976 campaign and troubled presidency doesn’t provide much new insight into the man or his times; if you already knew he was a devoutly Christian man of high moral character, you pretty much know what Wharton has to tell you. And as much as Carter enjoys his country, folk, jazz and gospel, the idea that he’s some wild-and-crazy rock & roll president feels like false advertising. Available Sept. 11 via SLFSatHome.org. (NR)

Rent-a-Pal ***1/2
Some of the best psychological thrillers are, at their core, as profoundly sad as they are conventionally scary. Writer/director Jon Stevenson tells the story of David Brower (Brian Landis Folkins), a 40-year-old single man serving as full-time caretaker to his dementia-afflicted mother (Kathleen Brady) circa 1990. While trying to find a relationship via a video dating service, he stumbles upon another VHS tape—one titled “Rent-A-Pal,” with a genial fellow named Andy (Wil Wheaton) offering to serve as a virtual friend and confidante. Not surprisingly, David’s interaction with his video buddy grows complicated, in ways that make it unclear whether something supernatural might be going on. Yet while Stevenson effectively builds his sense of menace—employing the unique sound design and grainy picture quality of VHS to creepy effect—this is less a horror yarn than it is a character study of deep loneliness. Folkins’s performance captures the tension between David’s sense of obligation and his longing for some semblance of his own life; it’s almost heartbreaking when the aftermath of a rare successful date finds him screaming a “Yes!” of triumph in his car. If there’s a downside here, it’s only that the finale doesn’t really deliver a knockout punch, after 90 minutes of landing surprisingly effective body blows. Available Sept. 11 in theaters and via VOD. (R)

Sibyl ***
Every time co-writer/director Justine Triet’s psychological drama feels like it’s headed in a particularly obvious direction, it pirouettes to something compulsively watchable. Virginie Efira plays Sibyl, a psychotherapist who is in the process of leaving her practice so she can resume her work writing fiction. Sibyl initially turns away a call from an actress named Margot (Adèle Exarchopoulos) facing a crisis pregnancy with her co-star (Gaspard Ulliel) as the father, but eventually agrees to work with Margot—and begins folding details from the actress’s situation into her novel. The mix of the “therapist who gets too close to their patient” and “writer who gets too close to their subject” tropes isn’t original on its own, though Triet folds in details about Sibyl’s history—recovering from alcoholism, facing her own unplanned pregnancy—that complicate the character. But things get really juicy when Sibyl visits the set of Margot’s in-production movie, and we get an electrifying supporting performance from Toni Erdmann’s Sandra Hüller as the film’s writer/director, trying to hold everything together despite the melodrama unfolding around her. The movie-within-the-movie often proves more interesting than Sibyl’s story, and that’s enough to keep Sibyl effectively unpredictable. Available Sept. 11 via SLFSatHome.org. (NR)