Antebellum, The Devil All the Time, The Secrets We Keep and more

All In: The Fight for Democracy **1/2
The political documentaries of our moment continue to be frustrating in both the depressing realities they’re trying to combat, and the strident sameness of the way in which they’re trying. The specific subject at hand for directors Liz Garbus and Lisa Cortés is voter suppression—both as a tactic with a long history in America, and as a specific case focused on the 2018 Georgia gubernatorial race, where Republican nominee and then-Secretary of State in charge of elections stacked the deck against Democratic opponent Stacey Abrams. Abrams’ story—her biography and the circumstances of that 2018 election—provides the immediacy the film requires, putting an individual human face on the consequences of a rigged system. But Garbus and Cortés seem too locked in to providing a cradle-to-grave primer on how America has kept people of color from voting, which naturally includes a long detour into the 1960s civil rights era on the way towards the gutting of the Voting Rights Act by way of the 2013 Shelby County v. Holder SCOTUS decision. The problem is that talking heads and archival footage, even while showing that, yes, Abrams’ obstacles were part of a long anti-democratic tradition, are numbingly familiar by now. An excess of back-story results in a loss of the cinematic power of right here, right now. Available Sept. 18 via Amazon Prime. (PG-13)

Antebellum *1/2
There’s a difference between a movie that lays the foundation to figure out a surprise, and one that doesn’t even seem to be trying to disguise a concept that is absolutely the only thing that it has to offer. At the outset, we meet Eden (Janelle Monáe), a slave on a Confederacy-era Southern plantation—but at another point, we see Monáe as a modern-day sociologist/author named Veronica, making media appearances on issues of race in America. You can expect plenty of brutality from the plantation-set sequences, of course, which would be excusable if the writer/director team of Gerard Bush and Christopher Lenz had anything interesting to say about the legacy of slavery in America. But instead of using the horror genre to offer insight into contemporary American racism like Jordan Peele’s Get Out, Antebellum seems content to throw a few genre tropes—there’s literally a creepy little girl standing in a hotel hallway at one point—at a concept that someone can suggest with a straight face is really about Who We Are Today, without a moment of genuine character insight for either the enslaved or their "masters." A few inevitably potent individual moments do little to make up for a movie that’s too lazy to get serious about what its all-too-obvious “twist” says about either the past, or the present. Available Sept. 18 via VOD. (R)

Chuck Berry **
A genuine legend deserves better than a documentary this sloppily constructed and lacking in focus. Director Jon Brewer attempts a full personal and creative history of the iconic rock & roll guitarist, singer and songwriter, making use of plenty of interview access to Berry’s widow, Themetta, his children, and musical collaborators. That access does allow for a few insightful segments, including a recurring thread about how Berry’s business dealings often fell apart through a combination of racist attacks and his own lack of savvy. But in general the structure here is a mess, bouncing between anecdotes about his life, praise by famous fans, and dramatized re-creations of events that are misguided even before the weird choices for digital colorizing. As a result, no consistent story emerges that gives us a sense of who Chuck Berry was either as an artist or as a man, with every potential avenue for exploration—lthe juxtaposition of his family-man home life with his frequent womanizing; the role of racism in his legal troubles; white musicians piggybacking on the foundations he laid—noted for a second before it’s dropped. A stretch of the film involving the making of Taylor Hackford’s 1987 Chuck Berry-centric documentary Hail! Hail! Rock & Roll is notable mostly for reminding by comparison what a good non-fiction profile should look like. Available Sept. 18 via SLFSatHome.org. (NR) 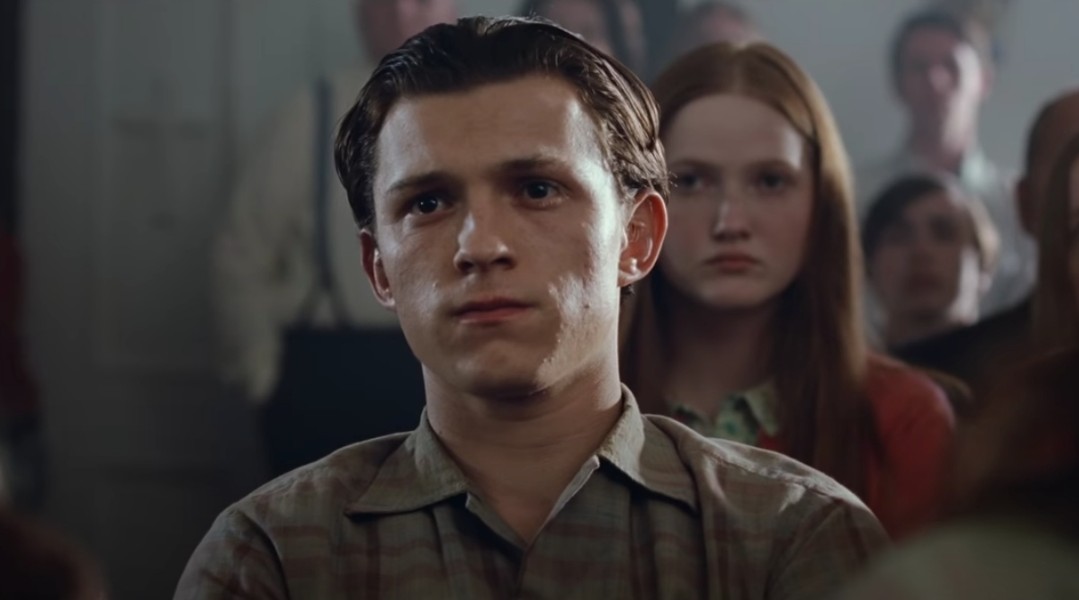 The Devil All the Time **1/2
I’m pretty sure I can see what Antonio Campos was trying to do with his adaptation of Donald Ray Pollock’s novel; I’m equally sure that doing it successfully would have required a miniseries. It’s a narrative that spans 20 years and two generations, beginning with newly-returned WWII veteran Willard Russell (Bill Skarsgård) settling down in a rural Ohio town, and later focusing on Willard’s grown son, Arvin (Tom Holland). Campos fill his supporting cast with familiar faces—Robert Pattinson as a lusty preacher; Eliza Scanlen as Arvin’s pious stepsister; Sebastian Stan as a corrupt sheriff; Jason Clarke and Riley Keough as a pair of serial-killing lovers—in a way that makes it consistently startling when their characters turn up suddenly or disappear just as suddenly. That’s just one of the factors that makes the story feel rushed and pinched, rarely allowing a sense of these characters to develop beyond their small parts in this nasty, violent world where Christian faith and authority are both polluted. It’s not at all coincidental that Campos bookends the film with the notion of young men going to war, but if The Devil All the Time was going to be a grand statement about 20th-century small-town American life twisted by the legacy of world conflict, it was going to take a few more hours of storytelling. Available Sept. 16 via Netflix. (R)

The Racer ***1/2
Imagine Bull Durham as a drama, with Kevin Costner’s Crash Davis as an over-the-hill, blood-doping pro cyclist, and you’ve got a sense for what’s prickly and uniquely appealing about co-writer/director Kieron J. Walsh’s feature inspired by the real-life doping controversy surrounding the 1998 Tour de France. In the run-up to the race’s first three stages that took place that year in Ireland, 20-year veteran Dom Chabol (Louis Talpe) ponders the possibility that this might be his season, on a team that barely seems to value his ability to help the cocky lead rider (Matteo Simoni) succeed. Walsh and co-writer Ciaran Cassidy kick up the sense of consequence by giving Dom a potentially life-threatening heart condition, plus a romance with a local physician (Tara Lee). But mostly, The Racer immerses you in the minutiae of the cycling world, from the at-times immature team dynamics, to the perpetual uneven tans from the riders’ cycling jerseys. It’s all powered by Talpe’s terrific lead performance, capturing a guy staring at the downside of his career and trying to decide what he’s willing to do to keep it going. By the time the film reaches a conclusion that provides a couple of impressive fake-outs, the answer to that question might prove either inspiring or deeply sad. Available Sept. 18 in theaters. (NR)

The Secrets We Keep **1/2
When a potboiler thriller uses the Holocaust as its backdrop, there’s a bit of an obligation to make the payoff worth it. Director/co-writer Yuval Adler comes close in his tale of Maja (Noomi Rapace), a Roma woman who survived a concentration camp to become a mother and wife to American doctor Lewis (Chris Messina) in late-1950s suburbia, then becomes convinced that Thomas (Joel Kinnaman)—a new arrival in her adopted American town—was a Nazi soldier who sexually assaulted her. Maja eventually kidnaps Thomas to extract a confession, with the central conflict emerging between Maja and Lewis over whether Thomas—who insists he’s a Swiss citizen who did nothing wrong—is actually Maja’s assailant, or whether trauma has clouded her memory. That’s a solid set-up, and Adler offers some effective scenes conveying the way the past intrudes on this marriage, including one where Maja and Lewis talk while separated by a wire fence. Yet much of the story revolves around the nuts-and-bolts of keeping Thomas hostage, with a little torture and too late a pivot to real moral questions. Rapace’s performance brings out the kind of emotional pain that never goes away, in a narrative that spends a bit too much time on the physical pain shown on screen. Available Sept. 16 in theaters. (R)

The Way I See It ***
Like many recent political documentaries, this one is all about what a piece of shit Donald Trump is, but from an angle that’s more melancholy than it is actively infuriating. Director Dawn Porter (John Lewis: Good Trouble) profiles Pete Souza, the one-time Chicago Tribune photographer who spent eight years as official White House photographer during the Obama administration. Though completely under-the-radar during his actual time in government, Souza became a public gadfly for his trolling Instagram posts comparing Trump to his presidential predecessor, but Souza himself—and his evolution into an activist—isn’t really the subject here, despite the reality that he was also a photographer for the Reagan White House. Instead, the emphasis is on the photographer’s work chronicling Barack Obama from his Senate years through his presidency, showing hundreds of photographs that capture him in his thoughtfulness, playfulness, compassion and basic decency. That’s hardly breaking news to millions of American who mourn for a time when the president behaved like a human being with a sense of responsibility to others, so the audience for The Way I See It will certainly be self-selecting. That doesn’t mean that Souza’s images lack the power to bring a tear to your eye for everything we’ve lost. Available Sept. 18 in theaters. (PG-13)