The Trial of the Chicago 7, On the Rocks, Hubie Halloween, The War With Grandpa and more

The 40-Year-Old Version ***
Frisky, messy and funny as hell, writer/director/star Radha Blank's film is its own best evidence for an artist to take full control of their creative life. Her character is what seems to be a thinly-veiled version of herself, a playwright once lauded as a “30 under 30” prospect but now approaching her 40th birthday, teaching high-school drama students just to pay the rent. So while her latest theater project languishes, she turns back to an art form she gave up in her youth: crafting hip-hop rhymes. Blank takes aim at a dozen different targets for her punch lines, from her own creaky body, to being an object of desire to many younger characters, to the compromises she makes in her play about Harlem gentrification so that a white liberal audience can feel good about it. It's a sprawling sort of narrative—touching on Radha's relationships with a variety of characters including her agent/high school BFF (Peter Y. Kim) and the music producer laying down beats for her rhymes (Oswin Benjamin)—and its diversions occasionally feel meandering rather than entertaining or enlightening. But it's all anchored by Blank, who warrants praise for every facet of her multi-hyphenatedness, particularly as wonderfully appealing central character. Available Oct. 9 via Netflix. (NR)

Aggie **1/2
Here’s a nice portrait of a good person, but you’d think with the subject’s daughter as the filmmaker, you’d end up with something a bit more insightful. Director Catherine Gund profiles her mother, art collector and philanthropist Agnes Gund, in the wake of Agnes’ 2017 decision to sell a $100 million Roy Lichtenstein painting to provide seed money for a racial-justice charity. In theory, what follows should give us the “why” behind Agnes’ action, and the biographical info—hinting at the privileged childhood that would ultimately leave her with a huge inheritance, but focusing on her post-divorce return to art history studies and her interactions with the New York contemporary art scene—does help clarify her interest in addressing societal inequities and prejudice. But as generous as Agnes clearly is, she proves to be a somewhat reticent interview subject, and it’s odd to note that Catherine gets what she has mostly from other people interviewing Agnes. The editing bounces around a bit too much, ultimately spending a bit too much time showing us all the art that Aggie found fascinating, rather than showing us what makes her fascinating. Available Oct 9 via SLFSatHome.org. (NR)

Hubie Halloween **
In an uncertain world, it’s almost comforting to find that, 25 years into his movie career, Adam Sandler is still playing overgrown man-children with silly voices in dopey mass-market comedies. He plays Hubie Dubois, lifelong resident of Salem, Mass., lover of all things Halloween (despite being afraid of everything) and town loser who is perpetually the target of mockery and pranks. The story involves strange happenings on Halloween night, vaguely connected to the recent escape of a mental patient (Rob Schneider) and Hubie’s new maybe-a-werewolf next-door neighbor (Steve Buscemi). Not surprisingly, it’s all an excuse for pratfalls, fart jokes and June Squibb (as Hubie’s mom) in a wardrobe consisting entirely of crude novelty T-shirts. Sandler rounds up a familiar gang of collaborators—director Steve Brill, co-writer Tim Herlihy, approximately one out of every three living Saturday Night Live cast alums—so nothing here should come as a surprise, except perhaps for a couple of solid gags, including a poke at the ubiquitous Harley Quinn costume for young women. Maybe it all works best as nostalgia for a simpler time, and a simpler Sandler, even if it looks from the end-credits outtakes that people had more fun making it than we had watching it. Available Oct. 7 via Netflix. (PG-13)

Major Arcana ***
The simplicity of writer/director Josh Melrod’s narrative is deceiving, as he crafts a subtle “here’s why you can’t come home again” tale. Dink (Ujon Tokarski) is an itinerant carpenter who returns after a four year absence to the rural Vermont town where he grew up, inheriting his recently-deceased father’s land and deciding to build a cabin on it. A surprising amount of the running time is devoted to the raw labor Dink invests in the construction, a work that takes on an almost ritualistic quality for the recovering alcoholic. But as Dink finds himself drawn back into the orbit of ex-girlfriend Sierra (Tara Summers) and his needy mother (Lane Bradbury), the film becomes a story about how easy it is to slip back into old self-destructive patterns, believing that sheer force of will is enough to stave off the influence of enablers. The performances are fairly basic, and even at only 80 minutes Major Arcana starts to feel a bit padded. It’s still an effective portrait of the stubborn small steps towards learning the lessons that will keep you alive. Available Oct. 9 via SLFSatHome.org. (NR)

The Trial of the Chicago 7 ***1/2
Aaron Sorkin is gonna Aaron Sorkin—get up on a soapbox, and stay there—but when he sinks his teeth into the right subject, he can still deliver the goods. Here, it’s the infamous 1969 prosecution of several progressive leaders—including Tom Hayden (Eddie Redmayne), Abbie Hoffman (Sacha Baron Cohen) and Bobby Seale (Yahya Abdul-Mateen II)—in conjunction with the violence that erupted at the 1968 Democratic National Convention in Chicago. Sorkin emphasizes the events at the trial itself, which turned into a circus in response to the preposterous rulings of Judge Julius Hoffman (Frank Langella). But his direction also effectively juxtaposes the testimony of government officials with the events as they happened, emphasizing the aggressiveness of the police presence in Chicago. And that’s only one way that the film feels particularly of-the-moment in its portrayal of political protest under attack, as well as the internecine philosophical battles that hinder progressive progress. The terrific performances—notably Mark Rylance as the defendants’ increasingly outraged attorney William Kunstler—pick up the slack whenever Sorkin’s grandstanding threatens to overwhelm the proceedings, resulting in an entertaining history lesson about the preposterous notion that “law and order” isn’t an act of aggression against dissent. Available Oct. 9 in theaters; Oct. 16 via Netflix. (NR) 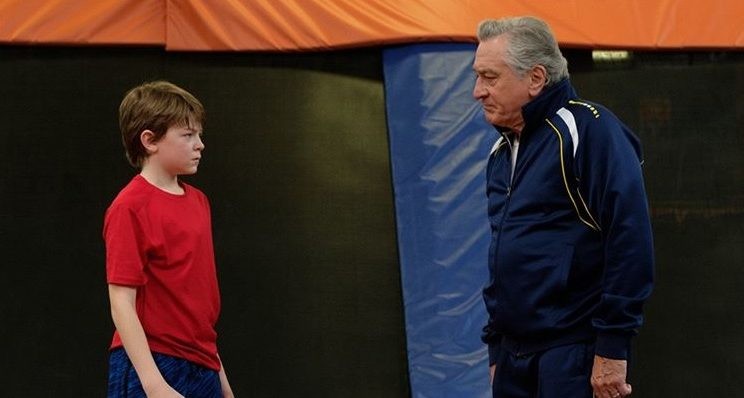 The War With Grandpa **
After three years on the shelf, this mild-mannered comedy emerges with not nearly enough reason to get anyone back into a theater. Oakes Fegley plays Peter, a 12-year-old facing the stress of starting middle school at the same time that his mother (Uma Thurman) brings Peter’s widowed grandfather Ed (Robert DeNiro) to moves in and take over what had been Peter’s bedroom. What ensues is an escalating battle of slapstick pranks between Peter and Ed, in a story that’s ultimately rather sweet about how much time family members waste on minor squabbles that divide them rather than on the things that connect them. There’s just not nearly enough actual entertainment value, aside from a not to Godfather Part II, in the silly stuff on the way to that moral; the brief asides involving Ed’s friendship with fellow seniors played by Christopher Walken and Cheech Marin suggests a story that would have been a lot more fun. It’s a harmless enough diversion, assuming you’re okay spending your family-friendly comedies counting how many times DeNiro’s character ends up either flat on his ass or exposing himself to his son-in-law. Available Oct. 9 in theaters. (PG)

The Wolf of Snow Hollow ***
A mix of horror, broad comedy, police procedural and earnest allegorical drama shouldn’t work, so congratulations to writer/director Jim Cummings (not the veteran Disney voice actor) for managing something so weirdly effective. Cummings also stars as John, a recovering alcoholic sheriff’s deputy in a Utah ski town where a string of murders—seemingly the work of a werewolf—sends him falling off the wagon. The tensions on the police force—including the late Robert Forster as John’s aging sheriff father, in his final performance—lead to a lot of strange humor, which offers some great bits but also bumps hard against the occasionally graphic violence. It’s also a not-too-subtle tale of the monster inside an alcoholic waiting to emerge, and Cummings does at times go big with John’s worst behavior and his contentious relationship with his teenage daughter (Chloe East). Yet he’s got a mostly steady hand as both writer and director, despite a climax that threatens to trample the fine line between Silence of the Lambs homage and  Silence of the Lambs plagiarism. Pretty good at a several different things winds up being pretty effective, even if it’s not great at any one thing. Available Oct. 9 in theaters. (R)

Yellow Rose ***
It’s an unconventional way to tell an American immigrant story—connected to a scrappy, would-be artist narrative—but writer/director Diane Paragas folds it all together into something fairly satisfying. In a small Texas town, 17-year-old Rose Garcia (Eva Noblezada) lives with her Filipino undocumented immigrant mother (Princess Punzalan), dreaming of becoming a country singer-songwriter—until an ICE raid lands Rose’s mom in custody, and turns her world upside down. What follows is a bit of a picaresque, as Rose looks for stability alternately with her mom’s estranged sister (Lea Salonga), an Austin bar owner (Libby Villari) and a hard-living singer (Dale Watson, playing himself). Noblezada anchors it all with a lovely, open performance, built around the question of whether Rose is prepared to give up her American dream to be with her soon-to-be-deported mom. It’s clear Paragas wants to paint an unvarnished portrait of an undocumented immigrant experience, and unfortunately the film gets a little clunky when it pauses to hit its talking points. The character study works better when a coming-of-age tale—and some terrific original songs—feel more organically connected to an almost existential uncertainty about where your life will lead you next. Available Oct. 9 in theaters. (PG-13)