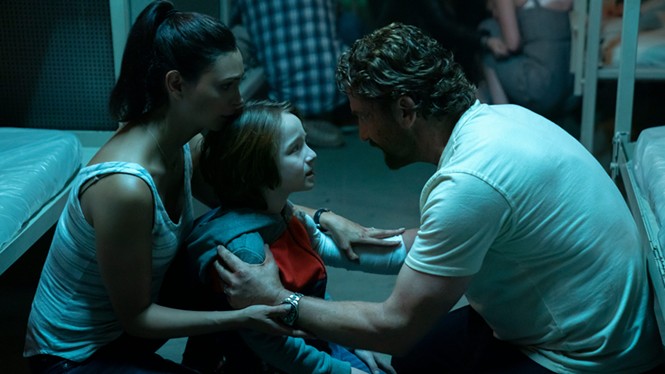 Breach *1/2
I feel kind of sorry for the editing team that had to try to make something out of the low-budget science-fiction junk they were handed as raw material. Set in the year 2242 as earth is being abandoned to apocalyptic catastrophe, it follows passenger and crew aboard the last spacecraft taking colonists to “New Earth”—including stowaway Noah (Cody Kearsley) and his pregnant girlfriend Hayley (Cassandra Clementi)—only to discover that a malevolent alien entity is also on board. The reason it’s on board, and what it wants, make absolutely no sense once their finally revealed, so all that’s left is hoping that the “Alien by way of every zombie movie you’ve ever seen” mayhem is engaging enough to keep you watching. It is not, mostly because every time you might see something cool, we cut away from it immediately because it’s obvious there wasn’t the money to actually create anything cool. The few bucks they did have must have been thrown at Bruce Willis and Thomas Jane, playing a couple of the badasses on the ship’s crew who at least have hammy screen presence where our theoretical protagonist Kearsley has not much. The final scenes seem to indicate the desire to begin a whole cinematic universe, which might be one of the most optimistic things I’ve ever seen. Available Dec. 18 in theaters and via VOD. (R)

The Emoji Story **1/2
Directors Martha Shane and Ian Cheney attempt a documentary that explores the history, present and future of the ubiquitous virtual communication symbols, and sometimes seem a little scattered as to how to put together all the pieces. In part, they want to explain the process by which it is decided what little images appear on our phones, and thereby introduce both the Unicode Consortium deliberative body that fields requests, and several individuals trying to add everything from a hijabi female face to a symbol for menstrual periods. The curious thing is that it’s more interesting delving into the general question of what emoji tell us about the culture and representation, rather than these specific stories which don’t get quite enough time for the characters to become fully-formed. And it’s odd for the story of emoji pioneer Shigetaka Kurita to emerge only near the end, mostly to have him react to being part of a Museum of Modern Art exhibition. There’s a lively energy to the 80-minute feature, but it grabs for so many bits and pieces that it feels like trying to decipher a string of emoji: Kind of fun, except you might not actually be sure what it all means. Available Dec. 18 via SLFSatHome.org. (NR)

Fatale **1/2
The only thing missing from this flashback to late ’80s/early ’90s “[fill-in-the-blank] from hell” thrillers is L’attraction before the actual title—and there’s something almost comforting in the familiar vibe by screenwriter David Loughery, who has gone to this well repeatedly in movies like Lakeview Terrace, Obsessed and The Intruder. Wealthy, married sports agent Derrick Taylor (Michael Ealy) hooks up with Val (Hilary Swank) while on a bachelor party weekend in Las Vegas, only to discover that what happened in Vegas—his one-night stand with someone who turns out to be a police detective with a crazy streak—decidedly does not stay in Vegas. A way-too-convoluted plot ensues, connected in part to Val’s back-story as a recovering alcoholic trying to get custody of her daughter back, in a way that strains too hard beyond the bare necessities of the genre. It still kinda works, thanks to the visual style from director Deon Taylor and cinematographer Dante Spinotti, and commitment to the bit by the two leads, but particularly Swank. Her flinty presence is exactly the right choice for this kind of story, even if by the time the credits roll, nearly every development feels familiar going back 30 years. Available Dec. 18 in theaters. (R)

Greenland ***
Someday, screenwriters might discover a plot structure for disaster movies besides “separated family members try to find one another;” until that day, rock-solid interpretations of that theme will do nicely. Angel Has Fallen director Ric Roman Waugh reunites with Gerard Butler for a tale about fragments of a killer comet beginning to pummel earth, with Butler’s structural engineer John Garrity and his family—estranged wife Allison (Morena Baccarin) and 7-year-old son Nathan (Roger Dale Floyd)—among the few Americans offered space in a life-preserving underground bunker. Complications ensue, as they must, but Waugh and screenwriter Chris Sparling offer up some impressively tense set pieces as society breaks down—and, in a way that feels particularly resonant after the last year, where small acts of decency and kindness feel monumental. Butler doesn’t provide much more than his physicality—though at least he’s allowed to use his actual Scottish accent, in a way that’s folded into a creepy moment of anti-immigrant hostility—and the rote interpersonal dynamics don’t add much whenever the story pauses for a breath. Yet despite plot machinations that don’t make a lick of sense with any scrutiny, the end of the world as we know it can still offer enough visceral intensity to make you forget all that stuff in the moment. Available Dec. 18 in theaters and via VOD. (PG-13)

Night Shift ***
There’s the half of Anne Fontaine’s movie that’s borderline great, the half that’s got great potential, and the whole made up of those two halves that makes each of them less than they could have been. Nominally, the focus is on three Parisian police officers—Aristide (Omar Sy), Virginie (Virginie Efira) and Erik (Grégory Gadebois)—tasked with escorting Tajik asylum-seeker Asomidin (Payman Maadi) to De Gaulle Airport, where he is to be sent home to almost certain death. It takes around half an hour to get to that centra plot, however, during which time we’re introduced to the personal lives impacting the officers, including an affair between Aristide and the married Virginie that has resulted in an unplanned pregnancy. There’s plenty of drama in exploring the home lives of officers, and the information we learn could have informed their respective choices once they face the realization that they may be facilitating a man’s death. Except that it’s hard to see any relation between those backstories and the actual prisoner transfer—which is a damned shame, because that middle 40 minutes is tremendous, filled with the tension of moral choices and Maadi’s magnificent despair as decisions are made around him in a language he doesn’t understand. The best moments here are absolutely indelible, and they’re surrounded by stuff that doesn’t seem connected to it in any way. Available Dec. 18 via SLFSatHome.org. (NR)