A commentary on the danger of "more more more" can't practice what it preaches. 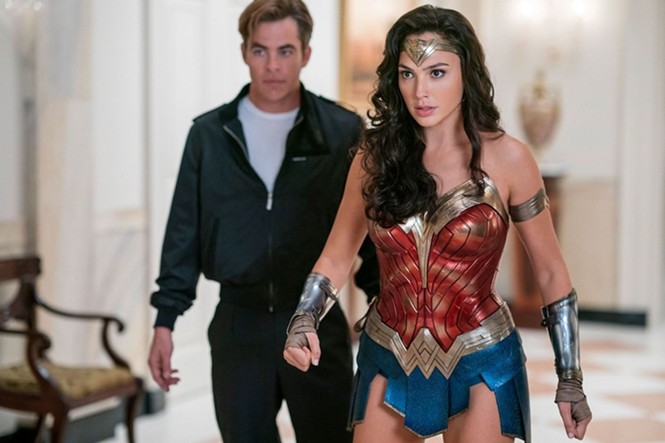 Is there any particular reason for WW84—which, to be clear, is the only title that ever appears on screen, rather than Wonder Woman 1984—to be set in 1984? That would seem to be a fair question, just as much as asking why the first one was set during The Great War. After all, once we’ve established that Diana (Gal Gadot) doesn’t really age, and that she’s still active in our present-day timeline to become part of the Justice League, a Wonder Woman story could take place in any era. So, other than a chance to make snarky jokes about parachute pants and mall aerobics classes, why 1984?

As it happens, there is a reason—and in theory, a pretty good one. This Wonder Woman story wants to be commentary on excess, on a historical moment that, at least in America, seemed to be all about an irrational pursuit of more. But there’s “in theory,” and then there’s the execution of that theory, and it’s in that space where WW84 starts to feel almost comically lacking in self-awareness.

From a prologue set during Diana’s childhood on Themyscira, WW84 flashes forward to Reagan-era America, where Diana—now employed as an antiquities expert at the Smithsonian Institution—is still mourning the death of Steve Trevor (Chris Pine) 70 years earlier. That’s when a mysterious artifact appears, seemingly with the ability to grant whoever touches it one wish. That’s why television investment huckster Max Lord (Pedro Pascal) is seeking it as a way to prop up his failing enterprise, and it’s also why Steve’s consciousness miraculously reincarnates inside the body of another guy.

The magical wish-granter is a perfectly satisfactory way to bring Pine back into the story, allowing him to serve the stranger-in-a-strange land role that Diana did upon entering modern society in the first movie. Director Patty Jenkins and her screenwriting collaborators don’t do much with that idea beyond poking at 1980s fashions, but more disappointingly, they don’t do much with the connection between Diana and Steve which is supposed to drive this whole narrative. The scenes between Gadot and Pine, emphasizing Diana's simple determination to do good, made for some of the strongest material in the original Wonder Woman; here, they too often feel like an afterthought.

The “Dreamstone” also plays a role in a subplot involving Diana’s co-worker Barbara Minerva (Kristen Wiig), a lonely, clumsy nobody whose wish to be like the beautiful and confident Diana inadvertently gives her Wonder Woman-esque powers as well. And it’s here that WW84 starts to feel like a story spiraling out of control. Like far too many superhero sequels, this one behaves as though the way to raise the stakes is to add additional villains, rather than make the most of one “big bad." Wiig does a fine job with the insecure Barbara, but it’s just weird seeing her transformed into super-villain whose arc is effectively identical to that of Max Lord’s, on the way to the same kind of apocalyptic, dimly-lit showdown that was the worst part of Wonder Woman.

It’s a damned shame that WW84 finds it so had to exercise restraint, because when Jenkins slows down, she crafts some absolutely lovely sequences. There’s a terrific moment involving Diana and Steve flying through a shower of Independence Day fireworks that’s transporting in its romanticism, and a similarly thoughtful bit where Diana learns to harness a new ability. But while it’s been easy in this relatively tentpole-free year to forget how many blockbusters don’t know when enough is enough, it’s weird to see that same mistake made by a movie that has as its entire thematic premise “know when enough is enough.” Though the 1980s might have been a time of celebrating excess, placing your narrative in that time doesn’t mean you have to celebrate it as well.