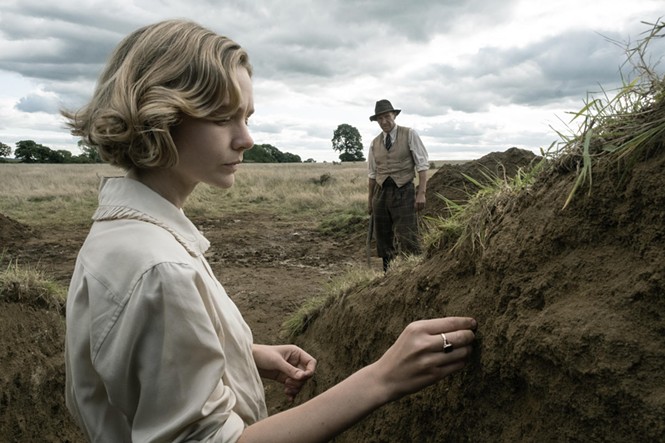 The Dig **1/2
This fact-based historical drama takes such an odd structural turn that I’m still not sure whether it’s admirable or a complete mess. In 1939, widowed landowner Edith Pretty (Carey Mulligan) employs self-taught archaeologist Basil Brown (Ralph Fiennes) to excavate earthen mounds on her Suffolk estate—where he unexpectedly discovers the remnants of a ship. A few subplots spin outward from that scenario, including Edith’s concerns about her health, and Basil becoming a kind of surrogate father to Edith’s son (Archie Barnes), all set against the backdrop of impending war. Then Lily James shows up as a researcher struggling in her marriage to her probably-gay husband (Ben Chaplin), and developing an attraction to Edith’s cousin (Johnny Flynn). All the performances are perfectly satisfactory, with Fiennes’ curmudgeonly Brown a particular standout, yet the story’s more serious notions—about contemplations of ancient civilizations emphasizing mortality and the need to live for today—begin to get lost in plot machinations more characteristic of soap opera. While melodrama isn’t inherently a bad thing, Director Simon Stone’s fancy for shooting everyone against wide expanses of sky suggests that he’s taking far too seriously something that could have worked better if it were simply juicy. Available Jan. 29 via Netflix. (PG-13)

Palmer ***
Just when you think we must have reached the 12-month quota on stories of hard-edged characters being softened through their care for a child—The Mandalorian, News of the World, The Marksman—here comes one with just a bit of a twist. Justin Timberlake plays Eddie Palmer, a recently-paroled felon returning to his Louisiana hometown to stay with his grandmother, Vivian (June Squibb). There he finds that Vivian regularly cares for Sam (Ryder Allen), the young son of a drug-addicted neighbor (Juno Temple), and that responsibility unexpectedly passes to Palmer himself. The twist is that Sam is a gender-nonconforming kid whose fondness for princesses and tea parties makes him a target for bullying, and completely alien to the ex-football star Palmer. That scenario could have made for the straight/cis equivalent of a “white savior” narrative, as Palmer learns his very important lessons and Timberlake competently stretches his dramatic acting muscles. It works primarily because Ryder Allen is terrific, creating a fully-realized portrait of a kid just beginning to realize that who he is threatens other people. Things get predictable once the finale drifts towards “who gets custody” legal drama, but it’s satisfying to see a very familiar premise take on a different point of view. Available Jan. 29 via AppleTV+. (R)

Rams **1/2
This Australian adaptation of Grímur Hákonarson’s 2015 Icelandic comedy-drama keeps the same title and its on-the-nose significance, but loses a little bit of the original’s deadpan charm. Once again, the story deals with two long-estranged brothers—Colin (Sam Neill) and Les (Michael Caton)—sharing a divided family sheep farm, and finding themselves both affected by an infectious disease that threatens their flocks. Colin’s creative decision to bypass the mandated quarantine creates most of the humor, yet director Jeremy Sims’ interpretation makes things feel more overtly farcical, even when employing visual gags that are nearly identical to those from the original. But there’s also something in changing the setting from a snow-covered landscape to the wildfire-ravaged coast of Western Australia that affects the mood; yes, it’s a hard land, but the hard edges of these two men play out in a way that feels warmer. While Neill and Caton are both solid in their interpretations of this thorny relationship, this particular story worked better when it wasn’t nudging you for two hours towards hoping for a reconciliation. Available Jan. 29 via SLFSatHome.org. (PG-13)

Saint Maud ***
Writer/director Rose Glass’s debut feature doesn’t quite hit all the marks as a portrait of obsessive religious fervor, but certainly hits enough of them to make an unsettling impression. In an English seaside town, home hospice nurse Maud (Morfydd Clark) begins a new assignment caring for Amanda Köhl (Jennifer Ehle), a once-celebrated dancer/choreographer with terminal cancer. But the recent Catholic convert Maud takes relationship with Amanda a bit too personally, becoming convinced that it’s her job to save Amanda’s soul. Glass teases with Maud’s previous life—and even a previous name—before exploring the traumatic events that sparked her new life. The psychology feels a bit shallow, at times making the use of elements like Maud’s mortification rituals feel more exploitative than insightful, and Clark’s performance doesn’t really reach the earnest depths of someone pleading to hear God’s voice. The direction, however, is wonderfully creepy when it explores the delusions in Maud’s point of view as she retreats ever farther from reality; even the jump scares feel fully earned. As psychological horror, it proves to be considerably more deft at achieving the “horror” part than it does at achieving the “psychological” part. Available Jan. 29 in theaters. (R)

Supernova ***1/2
It’s amazing how effective a tearjerker can be when it shows its audience even a modicum of trust. Writer/director Harry Macqueen tells the story of Sam (Colin Firth) and Tusker (Stanley Tucci), longtime partners taking what might be a last road trip through the English countryside, as Tusker’s diagnosed dementia advances. There’s a surprising lack of “incident” in the narrative—we get the expected moment of Sam suddenly finding Tusker has wandered off—which allows for a focus on the relationship itself. And Macqueen does a lovely job of capturing the dynamic between these two lovers in all its playfulness, verbal shorthand and simple silences. Better still, Macqueen directs with a confidence that his two great lead actors can carry even the simplest moments, like Tucci’s quite body language as Tusker realizes Sam might have caught him in a deception. Ultimately, Supernova wrestles with some weighty issues involving quality-of-life decisions, but somehow does so without ever feeling like a lecture. The emotional response to the story is born not out of overwrought situations, but convincing a viewer that we’ve come into the final act of a love story with years of history. Available Jan. 29 in theaters; VOD Feb. 16. (PG-13)