Leetham Strikes Out Solo with New Single
Pop continues to rise in Utah thanks to artists like Luke Leetham, who after six years of playing in bands—some during high school—is finally starting his own project. The young artist is moving out of the shared space of collaborative music making to work on his own music, working out of Provo with Porter Chapman, another pop kid on the rise making a name for himself as Bad Heather. Leetham’s first single to be released is “New Life,” a fitting tribute to striking out on one’s own for the first time. Praising a “new city” and the finding of a new life, the track references and bounces off of old school glitch pop, the kind popularized by early 2010s dance music and which slowly leaked into the mainstream, to now be reimagined in a bouncing, positive light by fresh young faces like Leetham. A modest, easygoing song, it shows the potential Leetham possesses to make even bigger, brighter sounds—just as it literally sings the praises of hope for change in the future. While he works on finishing more music (writing songs sometimes from his car), in the meantime he’s also working with Phoenix-based director Michaelangelo Cozzo to help “bring my project to life on screen.” Though still new on the scene as a soloist, it seems that Leetham is well on his way to bringing himself—and the music scene—some new life. “New Life” drops on Monday, Feb. 1 on all streaming platforms. Follow Leetham on Instagram @lukeleetham. 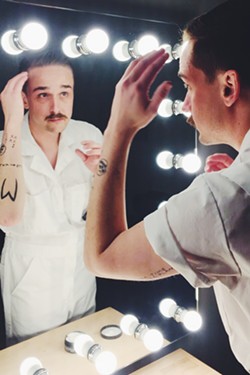 KRCL’s Late Night Lowdown with Justin Cornwall
Another newcomer to the SLC scene, Justin Cornwall moved to the city in August 2019, just a few months before the pandemic overtook us in early 2020. Though the DJ didn’t have a ton of time to establish himself in the scene, he still had valuable thoughts on what it’s like to be an ambitious artist during a pandemic, where he and others would stand in the music scene post-pandemic and other insights that led to him being included in City Weekly’s New Year’s reflection feature story. And though for artists like him who specialize in the kind of music best for dancing and getting sweaty to, he’s still finding opportunities to focus in on what kind of music he really wants to make, and those efforts will be readily available when he visits KRCL’s Late Night Lowdown this Tuesday, Feb. 2. The late show will be the perfect time to get zen to Cornwall’s trance-inducing, out-of-this-world productions, so make sure to settle in for a little weekday chill and tune into 90.9FM or krcl.org at 10:30 p.m. Keep up with the music of Justin Cornwall on Instagram @what_justin.